This article was originally published on the Paul Craig Roberts website

The Dow Jones stock average closed early September Friday at 17,137, despite the fact that the payroll jobs report was a measly 125,000 new jobs for August, an insufficient amount to keep up with the growth in the working age population.

Congress is focused on all the wrong things to get people back to work.  We hear day after day the drone of budget deficits, yet not a word is mentioned on the trade deficit.   This is the problem Congress should be obsessed with.   Our massive trade deficit is stunting economic growth and costing America millions of jobs.

The uber-rich have given us a Christmas gift. Yes, they have formed an organization, the Job Creators Alliance, to run public relations against us imbeciles who point out they are greedy bastards and to shape the national agenda. They even ask for donations on their website so they can pour money into lobbying, and media spin. All of this effort is to advocate for...the super-rich.

Thank you Bloomberg News who alerted us to the wonders of the CEOs, board members and super rich, bestowing their gifts upon us to explain why they should have all the money.

If successful businesspeople don’t go public to share their stories and talk about their troubles, “they deserve what they’re going to get,” said Marcus, 82, a founding member of Job Creators Alliance, a Dallas-based nonprofit that develops talking points and op-ed pieces aimed at “shaping the national agenda,” according to the group’s website. He said he isn’t worried that speaking out might make him a target of protesters.

“Who gives a crap about some imbecile?” Marcus said. “Are you kidding me?” 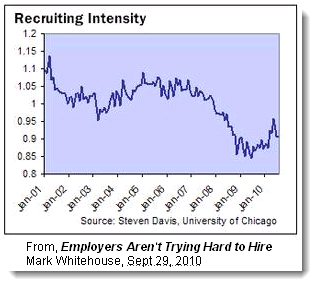 "The last unemployment report said that for the first time in my lifetime, and I’m not young…we are coming out of a recession but job openings are going up twice as fast as new hires. And yet we can all cite cases that we know about where somebody opened a job and 400 people showed up. How could this be? Because people don’t have the job skills for the jobs that are open." President Bill Clinton, September 2010

Former president Clinton took the lead in selling the notion of "structural unemployment" - a gap between employer job requirements and inadequate skills on the part of workers. Clinton's sales skills are considerable. The thoroughly unsupported notion stuck in the minds of the corporate media and some business leaders.

Since the U.S. is officially in a recession, and the Congressional Budget Office has predicted the worst economic downturn since the Great Depression, just about everybody acknowledges that times are tough. Everybody, that is, except the National Republican Congressional Committee. Talking Points Memo's David Kurtz caught the Republican fundraising operation spouting some embarrassing doubletalk on their website earlier this week, including the proud declaration that "the U.S. economy is robust and job creation is strong."

In fact, job creation is non-existent. The U.S. economy is losing over half a million jobs every month and even optimistic Wall Street economists expect unemployment to keep rising for at least another year.

The de-industrialization of the U.S. - 40371 reads
Safeway Skewered for Throwing 6,000 Workers Under the Bus in Video Parody - 322476 reads
The war on the middle class - 208308 reads
One cold snap uses 11.5% of US natural gas supplies; 8 more weeks like that and our gas storage will be totally empty - 83207 reads
"Whichever way the wind blows" - Update Fukushima I Nuclear Disaster - 42945 reads
Michael Bloomberg Possible Run for President Would Gut Social Security - 22703 reads
U3 and U6 Unemployment during the Great Depression - 238884 reads
California is officially flat broke - 89807 reads
The Cost of Left-Wing hate - 109822 reads
The Amazing Shrinking Labor Force - 9815 reads