The NAR reported existing home sales declined -1.2% from last month and May figures were revised down by 40,000 annualized units.  The revision gives a 3.4% monthly May gain instead of the 4.2% originally reported.   Inventories are still a very tight 5.2 months of supply, a 4.0% increase from last month's five month supply and a -18.8% annual drop in supply for existing sales demand.  Inventories increased 1.9% from last month but are down -7.6% from a year ago.   Existing homes sales nationwide have increased 15.2% from a year ago.  Volume was 5.08 million against May's 5.14 million annualized existing home sales. 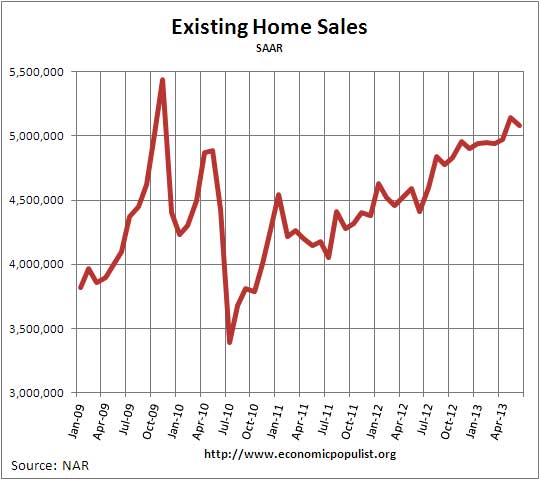 The national median existing home sales price, all types, is $214,200, a 13.5% increase from a year ago.  Median price has been above $200,000 for two months now.  Even more eerie, the last time there were 16 consecutive months of median existing home price increases was also the height of the housing bubble, March 2005 through May 2006.

The average home price for May was $261,100, a 9.6% annual increase.  The bubble like price increases that may very well have much to do with the Federal Reserve mortgage backed securities purchases, known as quantitative easing.  The Fed's move is keeping mortgage interest rates at record lows, in spite of the recent rise.

Yet all cash buyers are still high with 31% of sales being all cash.  In May all cash sales were 33%.  NAR reports individual investors are clearly still around, purchasing 17% of the sales in June.  Investor buys were 19% of all existing home sales in June 2012.

First time home buyers are still getting squeezed out from buying a home due to credit according to NAR.  Notice NAR never mentions declining wages and how the majority of America earns so little, they simply cannot afford to make rent, much less buy a house.

First-time buyers accounted for 29 percent of purchases in June, compared with 28 percent in May and 32 percent in June 2012. “First-time buyers should be closer to 40 percent of the market, but they’re held back by the frictions of tight credit and very limited inventory in the lower price ranges in most of the U.S.,” Yun said.

Home mortgage interest rates have also increased and this might account for the tampering off of sales.  From the report:

The report gives some insight on people sitting on their homes with underwater mortgages.  As prices increase, they are re-entering the market and 16% of existing home sales were by previously underwater home owners.

Of those previously underwater owners, 53 percent were planning to buy another home and 22 percent intend to rent, but 25 percent weren’t sure what they’d do. In addition, 47 percent of Realtors® report they have potential sellers who are waiting for additional price appreciation before they sell.

The median time for a home to be on the market was 37 days.  Those are bubble year time lines to sell a house.  In June 2012 the median time an existing home was for sale was 70 days.

According to RealtyTrac, foreclosures are down to December 2006 levels and decreased 14% in June.

Below is NAR's breakdown by type of existing home sales.

Here is our overviews of existing home sales not revised.  NAR does not mention their revisions in their press releases.