Once again the press is all up in it over RealtyTrac's November foreclosure report for it shows the lowest level of foreclosure filings since December 2005 on a month to month basis.

November foreclosure starts increased from a year ago in 15 states, including Pennsylvania (up 233 percent), Delaware (up 104 percent), Maryland (up 74 percent), Oregon (up 38 percent), and Connecticut (up 37 percent).

There were a total of 30,461 U.S. bank repossessions (REO) in November, down 19 percent from the previous month and down 48 percent from a year ago to the lowest level since July 2007, a 76-month low.

Thing is this happened in 2010 when the robo signing scandal broke and also foreclosures are seasonal.  Even Realtytrac says it is doubtful to see another onslaught of foreclosures and this is true, but it does not mean a return to 2005 in terms of less people losing their homes either.  All one needs to do is look at their graph on foreclosures and foreclosure starts to see there is variance on a month to month basis. 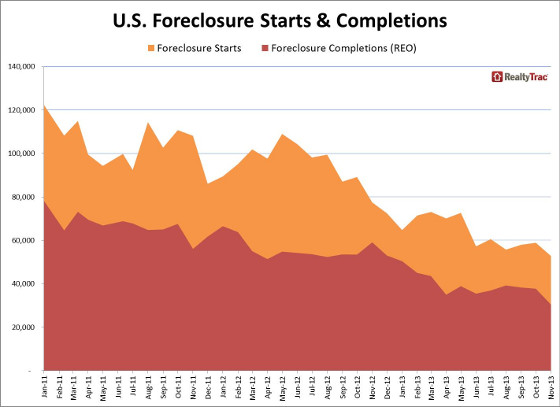 Things have improved but that does not mean the American middle class has recovered.  Lately the press seems bound and determined to spin their way to economic prosperity.  Sorry folks, it is more the tsunami is over.

House Progressives Introduce Their Own Bail Out Bill - 18653 reads
Friday Movie Night - The Meltdown of the House of Cards Edition - 80896 reads
Rejecting a Job Applicant based on their Credit Score - Discrimination? - 57108 reads
Safeway Skewered for Throwing 6,000 Workers Under the Bus in Video Parody - 342699 reads
We Are So Screwed - 15960 reads
Mortgage Deal Under Discussion - Obama Administration and Big Banks - 178602 reads
Choreographed Budget Cave In - The Money Party Stabs Citizens in the Back - 13693 reads
March global oil surplus at 17.7 million barrels per day; 2nd qtr surplus to be at 6.2 million bpd despite OPEC-led cuts - 5982 reads
Preying on the Injured as Public Policy - 13287 reads
GOP Spews Economic Fiction Again - 7436 reads