Just when you think the respite is upon us, the U.S. Chamber of Commerce says:

Today's GDP report is kind of the last hurrah for the U.S. economy, said at a press conference today. ``We've begun the process of slipping into a good old-fashioned recession -- Martin Regalia, chief economist for the U.S. Chamber of Commerce

Businessweek has some breakdown.

The GDP jumped to 3.3% but it's mostly due to exports (yea!) which were a surprising jump. Unemployment still in the tank and the housing is still where it was, dead, rotting on the floor.

The GDP deflator was only 1.2% in the 2nd quarter. That's less than even the cope CPI rate.
It's a joke, and not a good one.

I completely missed that. Great, we increase GDP because Americans are getting more squeezed.

Ya know I missed that because when I went looking for details, maybe I didn't look enough or it was BC (before coffee) but I saw nothing attributing to inflation!

Advocates of lowering the Nominal Top Corporate Rate and some other rates for Small Business are quick to point out that the U.S. nomimal rates are among the highest in the O.E.C.D. This analysis is flawed because almost no U.S. companies pay the nominal rate - 38 percent pay nothing according to the IRS. Factor in the non-payers and we have an effective rate of 20 percent. Near the bottom of O.E.C.D.

Twenty Percent is the threshold for the Alternative Minimum Tax, and by co-incidence the historical average for 100 years. (Wall Street Journal 1995).

Looking at just corporate rates is tunnel-vision. The bigger question is social taxation. If corporations pay tax then all who trade with corporations must in some way pay the taxes the corporation pays, or the corporation is weak in terms of it's pricing muscle. But there is another tax in the mix:VAT. Europeans pay as much as 30 percent VATs and the average is close to 15 percent.

VAT is a tax on production added value. Everybody who trades with a VAT payer domestically, must pay the VAT. The U.S. has no VAT and VAT is very much a social tax.

Subtract the Fifteen percent from the U.S. average rate of and U.S. corporations are paying nothing compared to European nations.

Next Topic - throw Labor Arbitrage into the Tax Discussion
and look at Manufacturing Jobs over 50 years. 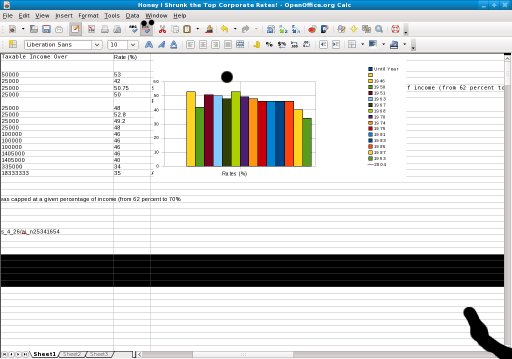