The BLS September JOLTS report, or Job Openings and Labor Turnover Survey shows there are 3.4* official unemployed per job opening. Opportunities, actual hires and layoffs were all down, showing a stagnant, dead pool job market. While openings decreased by -2.7%, actual hires declined by -5.7%. There were 3,561 million job openings for September, a -2.7% decrease from the previous month of 3,661,000. Openings are still way below pre-recession levels of 4.7 million. Job openings have increased 63% from their August 2009 Mariana Trench trough, yet real hiring is a distant memory and has only increased 14% from June 2009. There were 1.8 persons per job opening at the start of the recession, December 2007. Below is the graph of official unemployed, 12.088 million, per job opening. 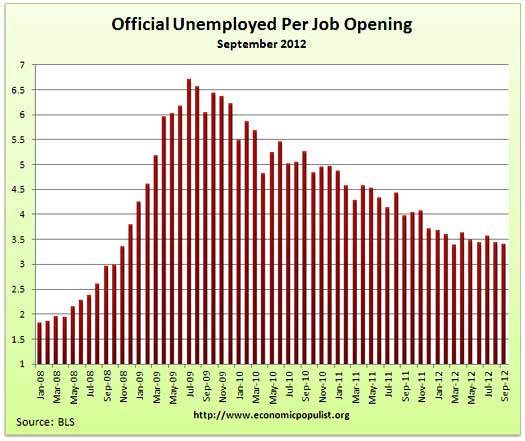 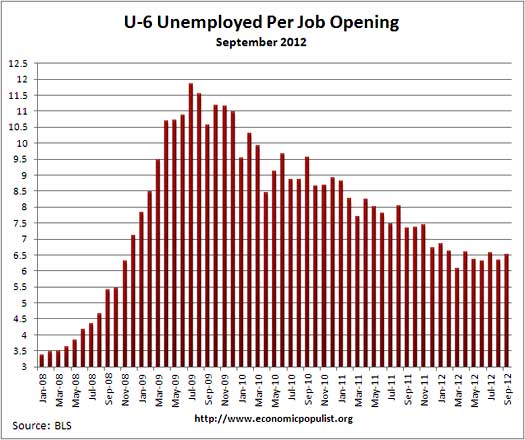 September hires were 4,185 million, an decrease of -5.7% from the previous month. Since the July 2009 trough, actual hires per month have only increased 14%. This is simply terrible as an indicator for employers are clearly refusing to increase hiring, across the board. Below are total job separations, 4.024 million, a -7.6% decrease from the previous month. The term separation means you're out of a job through a firing, layoff, quitting or retirement. Once again, our monotone JOLTS report looks like employment musical chairs. We have an unchanged 1.8 million overall yearly net job gain even though time marches on.

Over the 12 months ending in September 2012, hires totaled 51.6 million and separations totaled 49.8 million, yielding a net employment gain of 1.8 million. These figures include workers who may have been hired and separated more than once during the year.

Graphed below are people who quit their jobs minus those who were fired and laid off. The lower the bar on the below graph, the worse labor conditions are. The number of quits were 1.976 million for September, a -8.1% monthly decline. People who quit their jobs are still way below pre-recession levels of 2.8 million. People are clearly not voluntarily leaving their jobs because the job market is so bad, even though the jobs slaughter of 2009 where people were laid off and fired in mass is over.