The Q2 2012 Productivity & Costs revision shows Labor productivity increased an annualized +2.2% instead of +1.6%. Output was revised to +2.4% from +2.0% and hours worked were downgraded to +0.1% instead of the originally reported +0.4%. The revisions continue to show bad news for workers, more output for less hours means worker squeeze and less hires and it's worse than we thought with these revisions. Graphed below is business, nonfarm labor productivity per quarter. How does the BLS calculate labor productivity?

is about 75% of real GDP reported. Farms, if you can believe this, only subtract off about 1% from output totals. Labor productivity is reported annualized. The main productivity numbers above are all business, no farms, or nonfarm business, whose labor cost are over 60% of output.

From Q2 2011, or a year ago, annual productivity was also revised up to +1.2%, from +1.1%, output was revised up a 10th of a percentage point to +3.0%, and hours was revised down a 10th of a percentage point to +1.7%. Changes from a year ago show a little less worker squeeze for increased output than the annualized change from the last quarter. Output only growing 3.0% from a year ago is still anemic economic growth. Graphed below are unit labor costs, indexed to 2005. We can see the decline starting in the Great Recession. This Q2 2012 increase in unit labor costs is only slightly better news for workers' pockets. , increased at a 0.75% annual rate for Q2, which is a fairly low rate of inflation. By comparison's sake CPI also increased 0.75% annualized for Q2. Now here we have a bone to pick. If one derives the CPS utilized for this report, it is to six significant digits instead of the published four for the CPI-RS-U series, which supposedly is what the consumer price series is.

Guess what happens? Instead of an annualized 0.84% annualized increase in inflation, utilizing CPI-U-RS, we get a 0.75% increase. This has the effect of reducing the reported decline in real hourly compensation, simply by a lack of the correct number of significant digits for percentage resolution. That said, the last two quarters reported does use CPI-U and not CPI-RS-U. We've actually managed to piss off the BLS productivity division over this issue, but it clearly matters when one is reporting real compensation. On the other hand, if one takes CPI-U, the numbers for not just the last two quarter, but all quarters, it more closely matches the actual consumer price series used in the productivity report than the published one decimal place CPI-U-RS. Bottom line, when using price deflators, inflation adjusters, accuracy, significant digits matters. The BLS productivity statisticians use CPI-U-RS up to Q1 2012 and then for the current quarter, re-adjust CPI-U, but indexed to 2005. First, the CPI-U-RS is a research measure. This consumer price series seems to flatten inflation, thus make the decline in U.S. wages less, although when normalized to a base year of 2005 the two series are the same for all practical purposes for over a decade. The implicit price deflator, applied to nonfarm business output (productivity), is from the BEA. CPS and the price deflator are all to remove inflation effects from the productivity statistics. 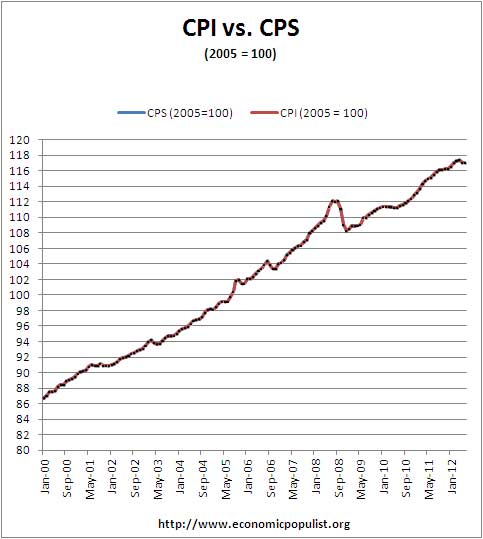 Manufacturing wages are beyond not keeping up with inflation, the numbers look like plain labor arbitrage. Below is real hourly compensation for all manufacturing.

For Q2 2012, durable good manufacturing productivity numbers were significantly revised. Productivity grew at +3.7% instead of the reported 4.3%, output was revised down, from +6.2% to +5.4% and hours were revised to +1.6% from the originally reported +1.9% increase. Yet none of this translated to workers. Durable goods labor unit costs dropped -3.2% from an originally reported -4.9% and real compensation declined -0.4%, revised from -1.5% Actual hourly wages were revised from a reported -0.8% to +0.4%. All of these figures are the change from Q1 2012 and are presented as annualized rates. Below is the durable goods manufacturing real hourly compensation index. Note it's decline. While leads me to this paper from the Monthly Labor Review, The compensation-productivity gap: a visual essay. Now these are the people who maintain the BLS productivity statistics. In the report, they go over their methods, calculations, which can make a huge difference in results. Bottom line they show since the 1970's, workers are getting less and less of the labor share or payout, less of a slice from the American pie called increased economic output. What they found was most of the productivity vs. how much you get in your pocket to spend gap before year 2000 could be attributed to a couple of different measures for inflation. After 2000, the gap is because workers are getting screwed. 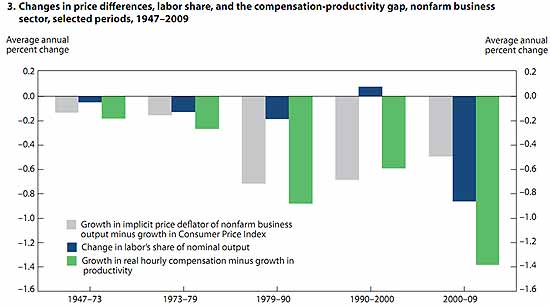 Productivity and Costs was significantly revised. It's tied to GDP, which is revised heavily, with benchmarks, as well as other inputs which are revised. Here is the original Q2 Productivity & Costs overview, although graphs are updated, text is not. Then, here is last quarter's overview, text only unrevised.