The latest trade statistics are out. From the U.S. Department of Commerce: 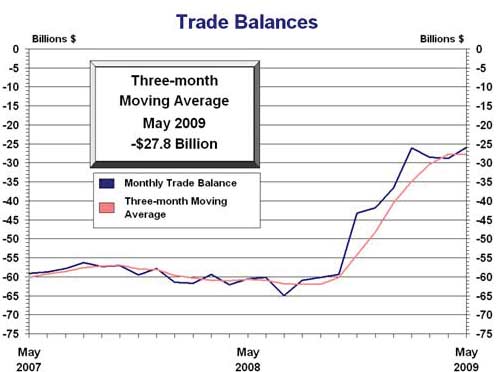 What an incredible improvement on the overall deficit. A silver lining to a global recession. Again, we are closing the trade cap.

In May, the goods and services deficit decreased $34.6 billion from May 2008.

This is the smallest trade gap or deficit since 1999.

But that should be good news, instead we have comments like this:

"The trade deficit report is another indicator that things are not improving as expected," said William Larkin, portfolio manager with Cabot Money Management in Boston. "There is growing pessimism about how quickly the U.S. will recover, which I think will be slower than people expect."

Somehow I don't think a ballooning deficit is indicative of job growth. Volume? Sure. Increasing the actual trade deficit? Uh, ask all of those in the Manufacturing rust belt on that one.