The SEC has decided to scold Lehman Brothers executives instead of bringing fraud or even civil charges.

U.S. Securities and Exchange Commission investigators may issue a public rebuke of Lehman Brothers Holdings Inc. and its former executives instead of suing them for actions that led to the firm’s 2008 failure 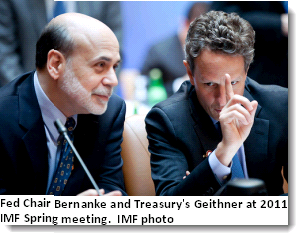 It took a while, but the financial markets are starting to realize that Quantitative Easing will end next month, possibly once and for all. The unprecedented amount of monetary stimulus being pumped into the global economy by the Federal Reserve will come to a sudden halt. Commodity markets have enjoyed a bubbly expansion since the QE2 program was announced, and they were the first to crumble when the Fed began removing the monetary supports. Stock markets are now slowly beginning to follow suit.

One reason the markets took the news sanguinely was because the Fed engineered it that way. After the May meeting of the Fed Open Market Committee, at which it was decided not to renew QE2 when it expires in June, Ben Bernanke gave a first-ever press conference by a Fed Chairman following an FOMC meeting. The media thought it was a masterful performance – which it was, but not for the reasons cited in the press. Bernanke made it sound as if the end of Quantitative Easing was the most natural thing in the world, and that all the voting members of the FOMC agreed with him. The fact is, the FOMC decision was a defeat for Bernanke and his allies, which included the two other officers of the FOMC, Janet Yellen (Vice Chair of the Fed Board) and William Dudley (NY Fed President). Dudley, just a week before the meeting, had gone public with his desire to have a QE3 program standing by, ready to aid a struggling economy.

Today is a historic day. The Federal Reserve gave their first press conference, ever. Below is the actual full press conference so you can watch for yourselves, in full.

Yes the title is crass, vulgar. Yet the never ending trading of mortgage backed securities, previously titled toxic assets in some game of musical chairs justifies the analogy. Take just this latest revolving door as an example. Did you know a former New York Federal Reserve Official, in charge of overseeing AIG now works for AIG?

If the US can’t constrain its own central bank from ruining the nation and the global economy, it will be up to the financial markets to punish the US in order to put a stop to the madness.

By definition, an unhealthy financial market is one in which prices move daily in one direction only, for an extended period of time. Markets without corrections, without the give and take of investors having different opinions about the future, are prone to sudden shocks. This is precisely the situation that has afflicted US stock markets since last July, when investors began to entertain the unanimous opinion that the stock market can only go up because the Federal Reserve will never allow it to correct. And why shouldn’t they think this way, when Fed Chairman Ben Bernanke keeps repeating that a rising stock market with low volatility is a monetary objective of the central bank? He said so again yesterday during his speech and follow-up press conference at the National Press Club:

... the Federal Reserve's securities purchases have been effective at easing financial conditions...equity prices have risen significantly, volatility in the equity market has fallen, corporate bond spreads have narrowed, and inflation compensation as measured in the market for inflation-indexed securities has risen from low to more normal levels...

Federal Reserve Chair Ben Bernanke gave a 60 Minutes interview and now the world is all abuzz with the possibility of more quantitative easing. He said other stuff ya know, like income inequality is a real problem in the United States and the unemployment rate could tip the scales into another recession. He even came clean with the reality 2.5% annualized GDP growth is barely enough to maintain the status quo. Watch the interview for yourself below:

Folks, the most horrific prediction was given by the Federal Reserve. Six, count 'em, six years of high unemployment. From the Federal Open Market Committee: