The ADP report for December 2010 it out and ADP is reporting a gain of 297,000 private sector jobs. This is the biggest service sector job gain, 270,000, in the history of the ADP report. The United States needs a good 175,000 jobs per month just to keep up with population growth and this is the first time we've seen any job growth like this for over 4 years, as reported by ADP. 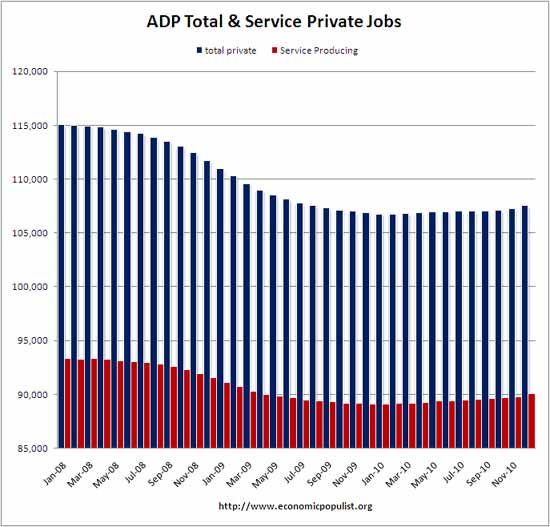 This month’s ADP National Employment Report suggests nonfarm private employment grew
very strongly in December, at a pace well above what is usually associated with a declining unemployment rate. After a mid-year pause, employment seems to have accelerated as indicated by September’s employment gain of 29,000, October’s gain of 79,000, November’s gain of 92,000 and December’s gain of 297,000. Strength was also evident within all major industries and every size business tracked in the ADP Report.

The below graph is manufacturing and goods producing jobs, which also gained. 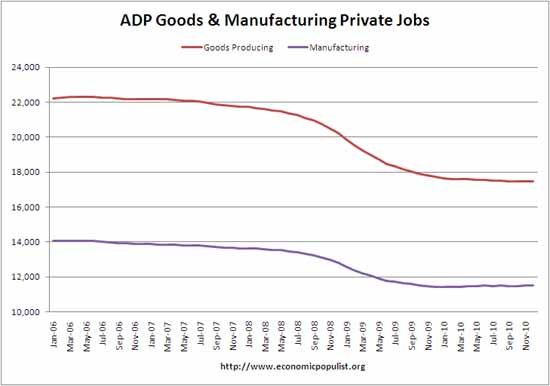 Only the financial sector lost jobs by the ADP report, construction was flat.

Ya know how the rhetoric goes on how small business is the job growth engine of America? From this report, it is. Jobs created by size of business were small business, defined as less than 50 workers: 117,000. Medium sized businesses, or less than 500 workers created 144,000 in Decembe and big business (the guys with all of the cash), only 36,000.

Finally a little brighter light, Ford just announced 7,000 new jobs (USA jobs) by the end of 2012. Most are in Michigan, but of course at the new low wages for factory (plant) workers.

Still, how many other large companies are announcing they are creating American jobs when they clearly should be?