The BLS employment report is actually two separate surveys and we overviewed the current population survey in this post. Between election rancor and pundit spin one can get dizzy with all of the statistical manipulations and economic fiction thrown about. We take a straight look at the jobs reported by businesses by the graphs, by the numbers and by the book.

The start of the great recession was declared by the NBER to be December 2007. The United States is now down -4.227 million jobs from December 2007, 4 years and 10 months ago. 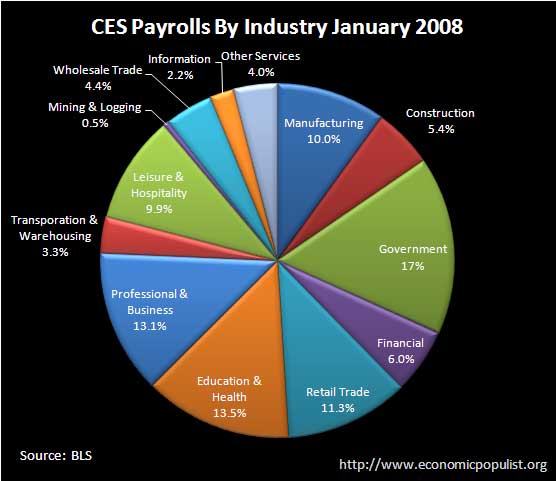 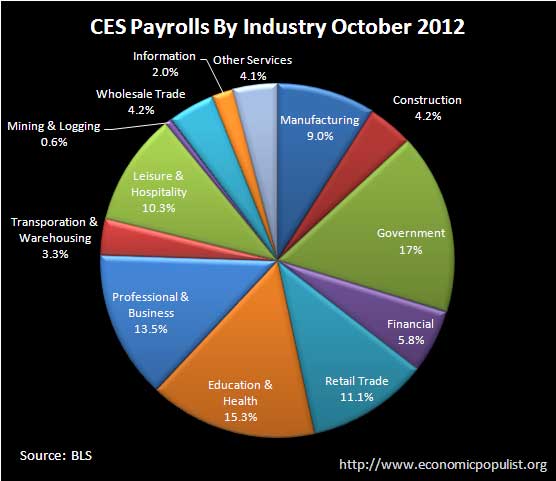 From October of 2011, the United States has gained 1,595,224 million payroll jobs. In the year previous, the U.S. had gained 1,572,736 jobs. This tells us jobs have been growing at pretty much at the same pace for the last two years and it's simply not fast enough to employ the 12.3 million official unemployed, never mind the estimated 18-23 million Americans who really need a good job.

Private Sector jobs, or jobs not from the government gained 184,000, yet are still down -3,862 million jobs from December 2007. Below is a graph of just the private sector payroll losses since December 2007. Government lost -13,000 jobs for October. That said, government, especially at the state and local level has been hemorrhaging jobs. Since January 2008, all government payrolls are down -365,000 jobs. Construction has just been hammered due to the housing bubble collapse as well as the recession. This month construction gained 17,000 jobs yet from the beginning of the recession jobs in the construction field are down -1,942 million jobs. Financial activities payrolls are now down -456,000 jobs since the start of the recession. This month the financial sector gained 4,000 jobs. Retail trade, which are your retail sales outlets like big box marts, direct mailing and anything retailing merchandise, is down -739,300 jobs since the start of 2008 and this month gained 36.4 thousand jobs. Education and health services has consistently been increasing and this month was no exception 28,000 additional jobs and of those jobs 32.4 thousand were in health care and social assistance, which implies education jobs were lost. A total of 1.835 million jobs have been gained in education & health services since the start of 2008. Professional & Business services contains management, career professionals, science & technical, administrative and support and finally waste services. This industry sector is only down -44 thousand jobs since the start of the great recession and this month added 51,000 jobs, with 13,600 of them being temporary. Transportation and warehousing also has still not recovered their jobs and are down -150,600 since January 2008. This sector has been losing jobs for recent months with October's gain being a measly 1,000. These are services for moving of people as well as cargo and also storage. Pundits and amateurs try to spin the employment report and this month it's on fire. What we have is another treading water employment report, which is certainly better than drowning, but not exactly providing enough jobs for America's citizenry.

I saw a post which claimed private payrolls has recovered their jobs lost from the recession. That is false. It is also statistically manipulative to pull out industrial sectors such as construction and manufacturing to make private payrolls "recover".

We do our best to not manipulate government statistics, yet shine a light on what's going on and I find such parlor tricks really unethical.

END_OF_DOCUMENT_TOKEN_TO_BE_REPLACED

House discusses 401k/IRA confiscation - 255571 reads
The Economic Populist Site Rank, Statistics and All of That Jazz - 144924 reads
The Federal Reserve Destroyed Our Site - 124090 reads
The QE2 Binge - Inflation on the Horizon - 60808 reads
Wisconsin Does the Nasty Against Labor - 125390 reads
Obama Signs Deal to Allow Mexican Truckers Onto U.S. Highways - 58584 reads
The Obama Administration is Training Offshore Foreign Workers to Take your Job - 67171 reads
Saturday Reads Around the Internets - Government Complicit in Libor Mess - 9105 reads
The Approaching Muni Bond Implosion - 29821 reads
Libya, Gas Prices, and the Big Payday at Your Expense - 48100 reads
Will the NY Attorney General Bring Doomsday Charges Against Wall Street? If So, How Long Will He Survive? - 1182920 reads
New York Post Claims Census Falsifies Unemployment Figures - 897537 reads
Safeway Skewered for Throwing 6,000 Workers Under the Bus in Video Parody - 396620 reads
How Many Jobs Are Needed to Keep Up with Population Growth? - 284573 reads
VAT or Value Added Tax is Getting a Look in D.C. - 279132 reads
U3 and U6 Unemployment during the Great Depression - 272204 reads
Tax Cuts for the Rich Do Not Generate Jobs - 257986 reads
House discusses 401k/IRA confiscation - 255245 reads
Delusions of Normalcy 2011 - Dismal Scientists Cheer Up - 245315 reads
The war on the middle class - 243712 reads