The Economic Populist will not be amplifying the ADP report. The reason is it diverges over 100,000 private sector jobs from the December BLS unemployment report and has been increasingly divergent in comparison to BLS private payrolls monthly reports.

Below is the private payroll totals between the two reports. Notice how the two lines start to divergence, or spread, starting about 2009. 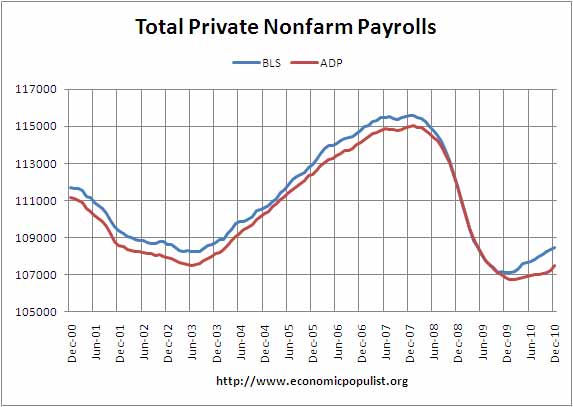 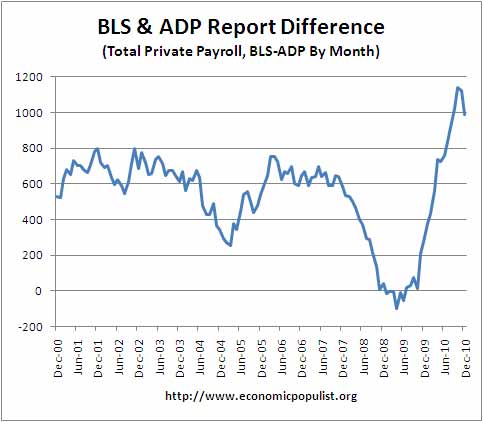 Next is the monthly change reported differences between the BLS and the ADP for total U.S. private payrolls. This is the absolute difference between the number of jobs gained or lost, per month that the BLS reports versus what the ADP reports. Notice here too, we see an increasing divergence starting about the 2008 time period. 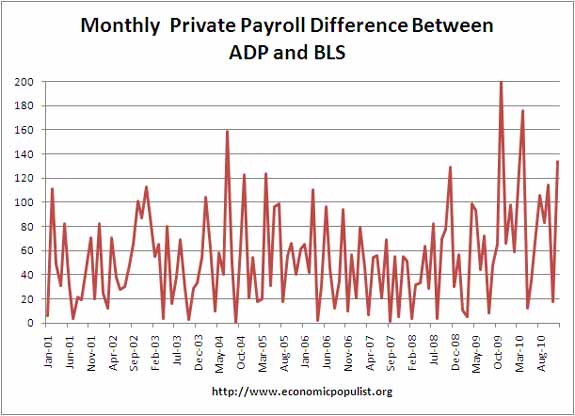 The BLS will release their annual benchmark adjustements this Friday. Calculated Risk did a good job in analyzing these annual adjustments, so maybe the two reports will start to resync, but in the interim, since the BLS is official and in spite of the never ending find unemployed Waldo hunt in the numbers (the missing real unemployed not counted), it's probably best to work from the BLS report.

Here is December's ADP report, which lead to a huge expectation we would finally see some jobs, only to wake up to yet another disappointing BLS report.

Below is the main conclusions ADP writes from their January report:

This month’s ADP National Employment Report suggests solid growth of private nonfarm
payroll employment heading into the New Year. The recent pattern of rising employment gains since the middle of last year appears to be intact, as the average gain over December and January (217,000) is well above the average gain over the prior six months (52,000). Strength was evident within all major industries and across all size business tracked in the ADP Report.

In January, construction employment dropped 1,000. The total decline in construction
employment since its peak in January 2007 is 2,311,000. Employment in the financial services sector increased 3,000 in January.

in reading on the Internets everyone is piling on ADP as being bogus. Now hold on there ya all, it's the methodology that is of interest. Remember, the BLS is bogus too, by refusing to give immigration status of workers and counting foreign guest workers, which can bias, then to find those who are not officially counted is a true mathematical exercise, instead of being reflected in the headline buzz numbers. Additionally, if a PhD takes a job at Walmart, that person is no longer unemployed expert in their field, instead a Walmart worker, i.e, retail trade.

So, who's biasing who here? Bottom line the American public and those who watch this stuff would like more detailed and accurate statistics on the American workforce it seems and the current point of wrath is the ADP.