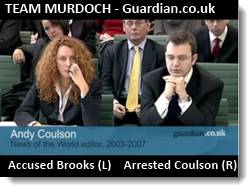 Update: Guardian.co.uk July 12 Government to back anti-Murdoch motion "MPs from all sides seem ready to back Labour motion in Commons tomorrow declaring it would be in the public interest for News Corp to withdrad BSkyB bid."

The Times of London, Sunday Times, stands accused of tapping into former Labour Party Leader Gordon Brown's private medical records. According to the story published today by BBC, Rebekah Brooks, chief executive of the Times parent, News International, called Brown in 2006 when he was Chancellor of the Exchequer and informed him that she knew Brown's son was diagnosed with multiple sclerosis. Brooks was editor of the Sun at the time of the call. The Sun is a tabloid.  She went on to become editor of the News of the World, Murdoch's 2.5 million circulation UK flagship. (Guardian.co.uk image/video)

"The Sunday Times is alleged to have illegally targeted the personal information of Gordon Brown when he was chancellor, the BBC has found.
"Documents and a phone recording suggest "blagging" was used to obtain private financial and property details.
The Browns also fear medical records relating to their son Fraser, whom the Sun revealed in 2006 had cystic fibrosis, may have been obtained."  BBC, July 11
BBC was clear on the cruel nature of the revelations to Brown by Brooks:
"A well-placed source has told the BBC that in 2006 when she was editor of the Sun, Rebekah Brooks called the Browns to inform them she knew that their son Fraser had the condition.
"Friends of the Browns say the call caused them immense distress, since they were only coming to terms with the diagnosis, which had not been confirmed."  BBC, July 11
This echoes the story of Murdoch's News of the World during the kidnapping case of 12 year old Milly Dowler. In its zeal to get the latest scoop on the hot story, the News of the World commissioned a third party to hack the Dowler's voicemail and jack the information. In doing so, the outcome was information on the voicemail that led Milly's parents to believe that she was still alive. She was, in fact, dead when the Murdoch paper illegally intruded.
The Guardian's Nick Davies broke the Murdoch phone hacking scandal on July 4th. By the 7th, Labour Party Leader Ed Miliband had called for a halt to Murdoch's acquisition of the remaining 61% of pay cable giant BSkyB (News Corporation owns 39% already). By the time Murdoch arrived in London to straighten things out, his good friend, Prime Minister David Cameron, had announced that the deal would be delayed while further investigations were conducted.

Delay is death for the BSkyB deal, one Murdoch has to have. The evidence that has piled up in just a week is enough to almost kill the deal. Another two months will surely do in Murdoch's most important deal.
If British regulatory authorities deem Murdoch "an unfit person" as a result of all of this, they must kill the deal.
Aside from presenting lies as truth (Saddam Hussein was behind 9/11), Murdoch's specific behavior leads one to that conclusion. He has steadfastly defended Rebekah Brooks. She's the Forrest Gump of the whole affair: editor of the News of the World during the Dowler outrage; called Brown regarding his ill son; chief executive of News International, parent of all of the papers accused of crimes of illegal surveillance.
As for the Murdoch Media Empire
His time is coming soon, a time of great loss and psychic pain. The Times of London was a force that added legitimacy to Murdoch and News Corporation. When people noted the many tawdry publications, he could point to The Times. Now that paper is no better than the shameless Murdoch tabloids. In addition, should court find the paper guilty of the current charges, The Times will be another newspaper, cum criminal enterprise.
The other legitimizing forces for Murdoch were the Dow Jones News Service and the Wall Street Journal. Murdoch's hand pick executive and publisher for these highly valued properties, Les Hinton, is implicated I the phone hacking scandal.
What does Murdoch have left?
His quality UK publication, The Times, stands to be totally discredited.
His DJNS-WSJ gem is tarnished by an executive who was tasked with cleaning all of this up years ago and failed.
His biggest deal, BSkyB, is headed over the cliff.
Murdoch is now vulnerable to attack and that may turn fatal should the UK regulators declare him "an unfit person." He's not just unfit in the UK, he carries that stigma with him everywhere, as Nick de Groote speculated last week.
Is this the end of "Little Rupert"?*
END
This article may be reproduced entirely or in part with attribution of authorship and a link to this article.