The May 2013 S&P Case Shiller home price index shows a 12.2% price increase from a year ago for over 20 metropolitan housing markets and a 11.8% change for the top 10 housing markets from May 2012.  This is the highest yearly gain since March 2006.  Prices are still on a jacked up pace to exceed the the housing bubble.  The monthly jump in the composite-10 was an 1.1% and 1.1% for the composite-20, seasonally adjusted.   Not seasonally adjusted, the monthly increases were 2.5% and 2.4% for the 10- and 20-City Composites respectively.

Below are all of the composite-20 index cities yearly price percentage change, using the seasonally adjusted data.  All of California, with some of the highest unemployment rates in the country, is clearly not affordable again.  Twelve of the 20 cities saw double digit annual home price increases for the year,.  above 20% gains for the year are San Francisco, Phoenix, Atlanta and Las Vegas.  For America's middle class trying to afford a home, this is just not sustainable. 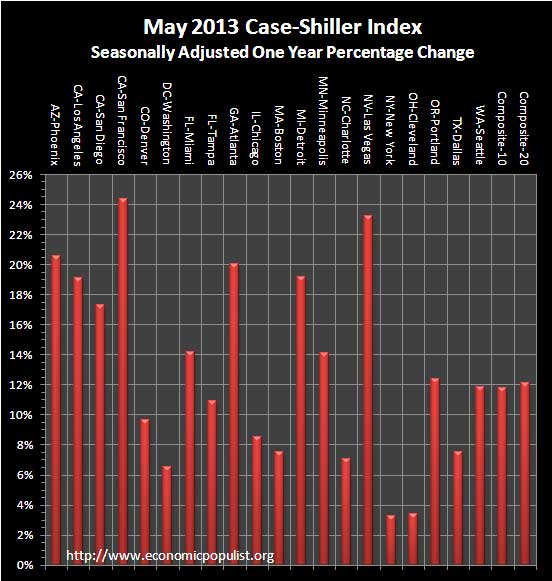 The below graph shows the composite-10 and composite-20 city home prices indexes, seasonally adjusted.  Prices are normalized to the year 2000.  The index value of 150 means single family housing prices have appreciated, or increased 50% since 2000 in that particular region.  Case-Shiller indices are not adjusted for inflation. 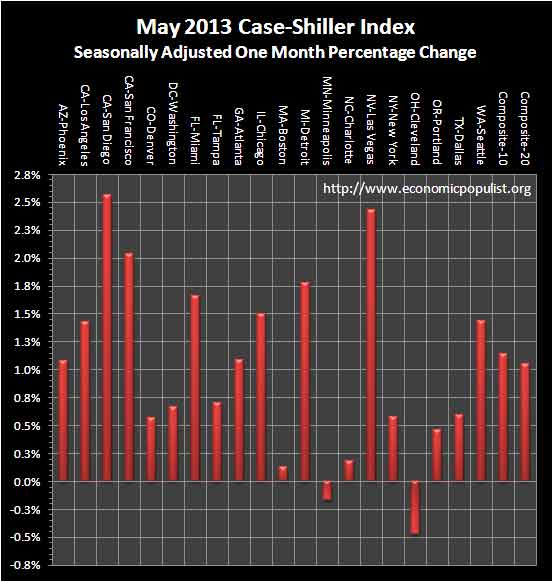 Below are the seasonally adjusted indices for this month.  The index itself tells you what has happened to home prices, per city, from the year 2000.  Only the city of Detroit, which just went into bankruptcy, is below their 2000 home price values. 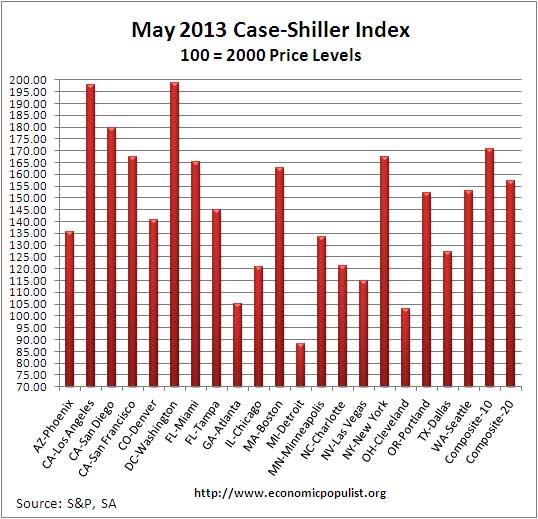 S&P estimates home prices are down approximately 24-25% from the height of the housing bubble's June and July 2006 price peaks and are at Spring 2004 levels.  These statistics use the not seasonally adjusted home price indices.

The de-industrialization of the U.S. - 40169 reads
"Whichever way the wind blows" - Update Fukushima I Nuclear Disaster - 42918 reads
The Amazing Shrinking Labor Force - 9802 reads
Safeway Skewered for Throwing 6,000 Workers Under the Bus in Video Parody - 322376 reads
One cold snap uses 11.5% of US natural gas supplies; 8 more weeks like that and our gas storage will be totally empty - 83116 reads
Long-Term Unemployed Baby Boomers in 2013 - 128501 reads
The war on the middle class - 208194 reads
U3 and U6 Unemployment during the Great Depression - 238827 reads
California is officially flat broke - 89753 reads
Mortgage Deal Under Discussion - Obama Administration and Big Banks - 173585 reads