The CBO has quantified what most of America already knows, the richer got richer while the rest of us are squeezing blood from a financial stone. In a new report, the Congressional Budget Office analyzed after tax household income growth by percentiles for 1995-2007. Guess what they found? The Rich increased their wealth out of the stratosphere in comparison to the rest of us. 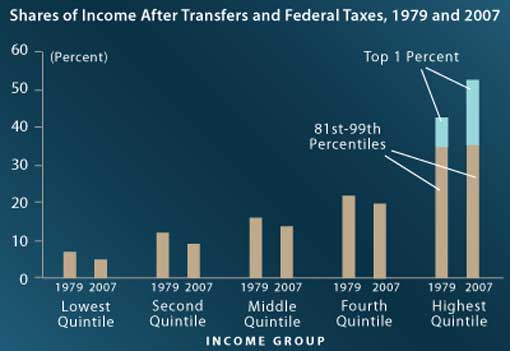 How did that happen? Labor, or most of us working stiffs wages are repressed while gambling on Wall Street paid off big time:

Transfer payments used to be a social leveler, but this report shows not as much, despite more people receiving social security than previously.

Of course the report discounts bad trade policy, offshore outsourcing, corporate governance and a host of other lobbyist passed legislation we know contribute to the reasons America is turning into a 3rd world nation. Selected studies are quoted and others dismissed in the CBO report to explain these outrageous income inequality statistics. The below news report overviews the CBO results.

ABC News did a great report on the growing American wealth divide. In the interview, Robert Reich implies there is no longer a we Americans anymore, replaced with an us vs. them. In other words, we have a strong class divide as a result of income inequality in the United States.