The conference board leading economic indicator (LEI) index dropped -0.2% for June. May was a +0.5% increase and April was a-0.1% decrease.

Below is their graph from the report, with both LEI and the coincident index, which was unchanged from May. The Conference Board's lagging economic indicator index increased +0.1% in June. 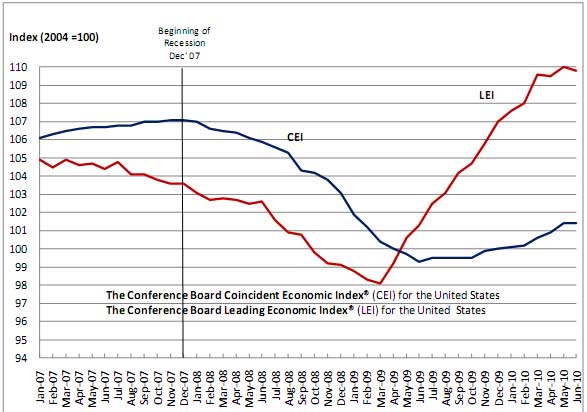 As one can see there are some elements completely divorced at this point from the real economy, such as corporate quarterly profits and stock values.

The coincident indexes combine four state-level indicators to summarize current economic conditions in a single statistic. The four state-level variables in each coincident index are nonfarm payroll employment, average hours worked in manufacturing, the unemployment rate, and wage and salary disbursements deflated by the consumer price index (U.S. city average). The trend for each state’s index is set to the trend of its gross domestic product (GDP), so long-term growth in the state’s index matches long-term growth in its GDP.

The problem here is while unemployment in States has decreased and nonfarm payrolls have slightly increased, job creation is not keeping up with population growth. So, it's a fictional number to base a coincident indicator on, if one is not taking into account the civilian non-institutional population growth and the number of people needing a job, not being counted.

If it trends to GDP great, but even GDP has phantom numbers, attributable to offshore outsourcing, so even there, we are not getting a clear snapshot of the real economy, in other words, what is happening to the American people financially.