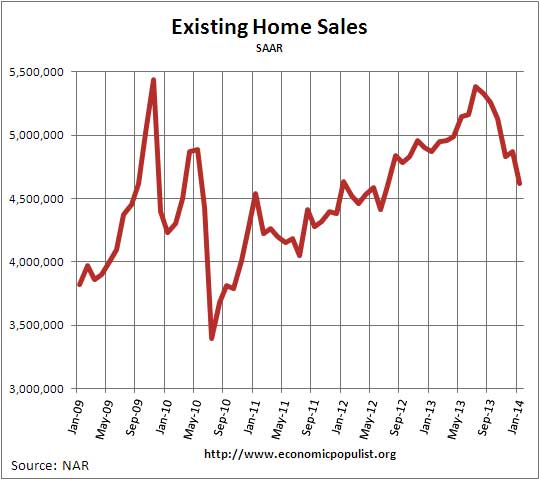 The above graph shows why existing home sales are showing declines from a year ago.  At this point we are seeing a sort of mini-bubble for 2013.  The NAR also mentioned problems with food insurance causing declining sales.  Yet only 8 to 9 percent of sales needed flood insurance and of those, 30% of the transactions were cancelled.  This equates to a little more than half of this month's sales decline is due to problems with soaring rates for food insurance.  Below is a quote from the NAR on flood insurance and note these figures are not annualized.

Since going into effect on October 1, 2013, about 40,000 home sales were either delayed or canceled because of increases and confusion over significantly higher flood insurance rates. The volume could accelerate as the market picks up this spring.

The national median existing home sales price, all types, is $188,900, a 10.7% increase from a year ago.  Below is a graph of the median price.  One needs to compare prices only a year ago for increases due to the monthly ups and downs in prices associated with the seasons. 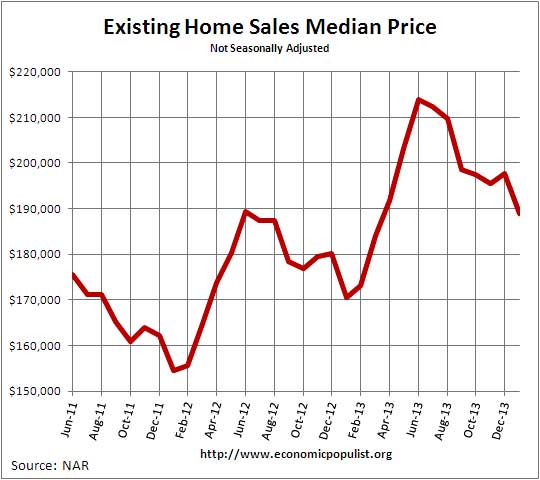 The average home price for January was $237,500, a 8.8% increase from a year ago.  It appears that as bank owned properties and foreclosures dry up, prices are once again soaring and sales are down.

The median time for a home to be on the market was 67 days with a third of home sold within a month.  Housing inventory remains very tight yet increased 6.5% from December.  From a year ago unsold inventory has increased 1.4%.  The current 1.9 million homes available is a 4.9 months supply.

Below is NAR's breakdown by existing home sales type and regions.  Expect a temporary pop up in February on sales for in some regions of the country, the weather has been just crippling.

Not as many people can afford to buy houses. The end. No really, it is the end of the middle class. While economists of every stripe continue to argue for the importance of rising prices of real estate, their value as housing seems to be ignored completely. Look around the neighborhood where you grew up, does your pay make a home that has gone up in price 25 times what it was 20 years ago magically more affordable? No. If anyone cares to explain Dean Baker, for example, I'm all eyes.