Rolling Stone investigative Journalist Matt Taibbi has done it again, writing a knock down, drag out piece asking Why Isn't Wall Street in Jail? It becomes evident if you are rich, acting behind the cover of a corporation, you can get away with pretty much anything. Regular poor people, stealing a bike or a purse, you're going to jail with a felony conviction and a fine larger than your income.

The title of this piece is what a former Senate investigator told Taibbi to write on the financial crisis for that sums up the situation.

Nobody goes to jail. This is the mantra of the financial-crisis era, one that saw virtually every major bank and financial company on Wall Street embroiled in obscene criminal scandals that impoverished millions and collectively destroyed hundreds of billions, in fact, trillions of dollars of the world's wealth — and nobody went to jail. Nobody, that is, except Bernie Madoff, a flamboyant and pathological celebrity con artist, whose victims happened to be other rich and famous people.

Instead, federal regulators and prosecutors have let the banks and finance companies that tried to burn the world economy to the ground get off with carefully orchestrated settlements — whitewash jobs that involve the firms paying pathetically small fines without even being required to admit wrongdoing.

I highly recommend reading the entire piece, rattling off the latest messed up system where criminals get multimillion dollar bonuses and the whistleblowers risk everything and receive nothing or worse. The piece goes through the regulatory mechanisms, how they are supposed to work and how it really works, with examples. It's a financial regulator system that literally protects financial crime.

Even Bernie Madoff is saying the banks and hedge funds knew he was a fraud. Nobody cared because they were making money.

In case you missed it, TARP special inspector general, Neil Barofsky resigned and guess who cheered? The U.S. Treasury, read Tim Geithner. Barosky wrote report after report blasting the Treasury, the bail outs and especially the AIG payouts. So, the few voices who were reporting on the FIRE sector are dropping like flies. I guess the message is if you're rich enough and want to steal, just change the law and make it all legal. Problem is, this time, the American middle class is truly tapped out. Maybe the Chinese can bail out the financial sector when Economic Armageddon happens again.

Well summarized.
I really fear that this is where we’re at …..the now current “norm”.

In Illinois we call the obviously colluding and only-hypocritically supportive two parties “The Combine”; i.e., it’s the same goal for both. It’s all about superficially playing to your electorate but in reality supporting the power and money sources (the corporations, deal makers, and money providers). The hypocritical support used to be primarily apparent in how the Republicans played to the extreme right at election time and then all but ignored them till the next election. Now we see it throughout both parties as they kow-tow to the Corporatist agenda. Look at Obama’s response re the WIS governor attempting to unilaterally eliminate collective bargaining for public employees. In an interview, Obama essentially said ‘we all have to sacrifice a bit’. I’ve become convinced that the reason the Democrats don’t even seek to stop the loss of a theme or message, nor even its perversion (e.g. tax cuts for the rich are fine but we need to slash spending ….including the safety net) is that they too are primarily interested in first meeting their obligations to their lobbyist masters.

Empower and encourage the good regulators, the capable Justice Dept? Sorry – we have campaign contributions to encourage and a future revolving door, well-paid retirement tour with these firms in our future.

It is so corrupt, it's beyond comprehension. As I transverse these various statistical agencies and economic data, I gotta wonder what they are thinking internal, for it's like their statistics and GAO reports, all of the information gathering to set appropriate policy by.....seems to be ignored.

Why bother to have any objective investigative reports or data gathering when politicians continue to spew fiction and worse, enact legislation, policy that's going to damn the U.S. economically further.

I think anyone running for Congress, office should first have to pass a few entrance exams, say economics 101, history 101, statistics 101, even addition and subtraction.

Main stream media really must hate Taibbi. This forces them to follow up. If this was just a blog somewhere it would be ignored.

The uber elite give each others awards!

Obama presenting the Medal of Freedom to Bush I (for what!) 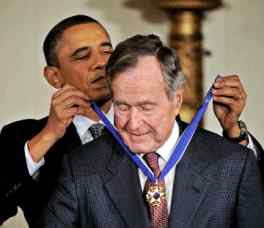 As usual, the most brazen fraud outfit of them all, Countrywide is walking away with not a single personal facing prosecution.

The powers that be are afraid to prosecute them. First, it might lead to loss of political contributions. Second, it might raise inconvenient questions. Kind of reminds you of "graymail" -- this time against the financial system and the Fed. Prosecution? Goodness no, chums -- this will all pass and the ruling class will get richer.

they may be able to get all the money in the world but they are not immune from the pollution and devastation that they are allowing to happen to the world and that will effect them and there better than thou children. I doubt they even think about these things because they are so self-absorbed in their wealth.