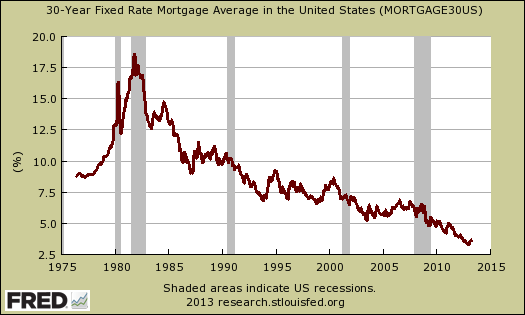 The January 2013 S&P Case Shiller home price index showed a 8.1% price increase from a year ago for over 20 metropolitan housing markets and a 7.3% change for the top 10 housing markets from January 2012.  This are the highest yearly gains since Summer 2006, the height of the housing bubble. February's average new home sale price was $313,700, clearly outside the range of what most wages can afford. The February new home median price was $246,800.  Median means half of new homes were sold below this price and both the average and median sales price for single family homes is not seasonally adjusted.

Clearly from the statistics homes are simply out of range for the average salary these days, even with low payments due to low mortgage rates.  Additionally, it was analyzed the Federal Reserve will lose up to half a trillion dollars on these purchases of mortgage backed securities and U.S. Treasuries.

That sum is the difference between the value of securities in the Fed’s portfolio on Dec. 31 and what they may fetch in three years, according to data compiled by MSCI Inc. (MSCI) of New York for Bloomberg News. MSCI applied scenarios devised by the Fed itself for stress-testing the nation’s 19 largest banks.

MSCI sees the market value of Fed holdings shrinking by $547 billion over three years under an adverse scenario that includes an economic contraction and rising inflation. MSCI puts the Fed’s mark-to-market loss at less than half that, or $216 billion, if the economy performs in line with consensus forecasts of gradually rising growth, inflation and interest rates.

The potential losses are unprecedented in the Fed’s 100- year history.

While home prices overall are still 30% off of their 2006 peak, it's clear the bubble mindset is still present.  It also appears it's quite a risk and price to pay to prop up the housing market through quantitative easing. Quantitative easing is causing rising home prices, not a real economic recovery with real increasing wages.   If only there were bundled derivatives linked to wages instead of residential mortgages we might then be set.  Instead, it appears the bubbles are blowing, out to rise once more.