Readers of this site are surely aware state budgets are in huge trouble. This evening, the news went prime time in a 60 minutes segment, A Day of Reckoning: State Budgets Crisis. Currently States, all 50 of them, have a $500 billion deficit hole combined.

Needless to say all sorts of articles are popping up about the lack of safety in the municipal bond market as a result of the 60 minutes report. But is it as bad as 60 minutes implied? According to Bloomberg, the Stimulus and Federal Government have filled a $575 billion budget hole projected for 2010 fiscal year.

Yet New Jersey Governor Christie, a Republican is busy gunning for pension funds, claiming nothing is left.

Much of the 60 minutes report is based on Meredith Whitney's estimate that at least 50 state and local governments will default. Below is a more detailed interview with Whitney where she explains in more detail her default assessments:

Below are charts from a report from CMA on Q3 2010 sovereign credit risk. As we can see states actually trended lower in risk, yet their 5 year probability of default rivals Iceland and Ireland. 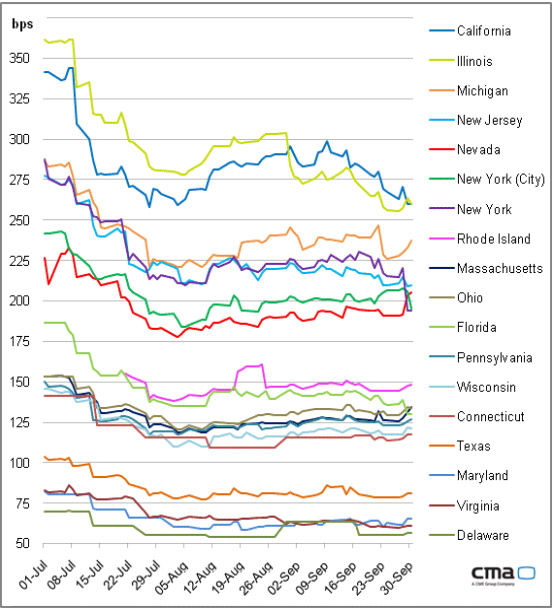 Below is CMA's estimates on the percent risk of default for the top worst states. 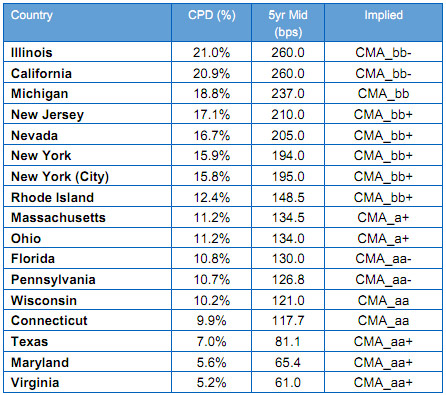 Yet if one notices in the video, once again pensions and retirement are the targets. There are a host of budget busters, from gross inefficiencies to interest and bad management to pet projects by special interests and really inane tax policies. That's not to say states and local governments aren't hurting, but what is missing often from the dialog is simply smart money management and efficiency.

In California, for example, the public employee pension fund, CalPERS, is about 7.5% of the budget, at $6.5 billion. Is anyone aware the estimates for California to keep their sanctuary policies for illegal immigrants costs over $10.5 billion a year?

Voters rejected legalizing pot in California, which made great economic common sense and also would have helped the budget enormously. Yet these same voters, from the marijuana usage estimates, seem to have no qualms buying their weed from Mexican drug cartel suppliers instead.

Pick an issue where for whatever reason, common sense and economics 101 calculations are trumped by philosophy and politics. Now, the attack is on retirement funds. Indeed, Alternet wrote up a good overview point on Corporate America's plans to raid our retirement.

So, yes Virginia, this crisis is real, but some of it is self-made and other parts are your classic never waste a crisis to attack retirement and social security. Whatever you do, don't do a run on municipal bonds and realize each state has different risks, probabilities of defaults and even different problems and reasons why their state and local governments are in the messes they are. About the only common thread are special interests and attacking the U.S. middle class as agendas.

Supposedly Obama going to propose cutting social security in the State of the Union.

These days with blogs, reporters and people like us, one hopes Politico checked their sources, but I imagine they found out something to write up a story like this.

We're written many pieces in the last couple of weeks pointing out the real target of Wall Street, corporations, uber-rich's 40 year agenda to destroy what is left of any social safety net and it's clear they have a bulls-eye on social security for this year.

If Obama proposes cutting social security in the State of the Union, it's official, this guy is a corporate oligarchy nightmare, regardless of what political flavoring you come from. If he does it, I'll make a point to promote all of the conspiracy theory "documentaries" on Obama that I have never put into the Friday Night Video with the disclaimer, just because you're paranoid doesn't mean they aren't out to get cha.

I'm telling you that freaking Social Security tax cut is making me lose sleep. That came from out of the blue. It muddied the waters and will be used as an excuse. Social Security is solvent the money was stolen. Now another blame the victim game begins. we are entering an endgame here. Either Obama does not get it or he is part of the machine.

why are the American people not in outright revolt at this point.

Social Security cuts are happening across the globe. The worst kinds of CT are plausible. IMF, World Bank and other predators are behind this as part of the G20 deals worked out this year. Yes, monies are stolen because of the Inter-Generational Social contract now broken.

By the same token we are free now to think the previously unthinkable, politically socially,economically. Nothing is out of bounds.

The Politico report is vague but pointing to the worst

"
The second part, now being teed up by the White House and key Senate Democrats, is a scheme for the president to embrace much of the Bowles-Simpson plan — including cuts in Social Security. This is to be unveiled, according to well-placed sources, in the president’s State of the Union address.
"

We have a "financial crisis", which of course requires trillions in bail outs...therefore the only answer available is to slash retirement and any government pension program (social security). It happened in Greece, then Ireland, happening in the U.K. and is becoming increasingly evident to be a target in the U.S.

One of the more popular posts on EP is when I wrote up about Obama's economic advisers promoting a "partial" privatization and reduction of social security and that is before any financial armageddon happened.

I think we're in huge trouble, one of the worst disasters for Americans would be to have that meager benefit reduced or eliminated. It's bad enough that the people about to retire and younger were denied pensions....so this coming poverty wave has not even started to hit yet. But it will and we're going to see a world of pain like no other.

There is no shame or fear in the Simpson Commission. There is no sense of history. When the Great Sea Wall called of the Welfare State - SS, UI, Survivor Benefits, Disability come down, there is going to be a real shit storm world wide and it's happening now.

The big advantage, world wide goes to the Left. But some deep thinking people on the Right may come up with answers like localizing everything lost in the Welfare State collapse. The demise of Public Pensions is not going down well. There is talk on the far left of the 5th International. The crisis of capitalism is exceeding the Great Depression.

I do not see a second term for Obama if he co-opts and does all dirty work for his opposition. On the economic side, you have done much education in the components of GDP, and government is a component.

The last corporate takeover of the U.S. partially ended with Teddy Roosevelt got into office on a fluke (Mckinnley was assassinated and at that time, they put trouble makers into the VP slot to silence them). Then FDR was phase 2.

Right now Nixon looks like a Communist is comparison to what's happening now.

Even worse, that's already happening in the West states. They won't do a damn thing about illegals using social services, but cutting services to the disabled and elderly...oh yeah, that's first to go.

This is a huge problem, the left is absolutely insane on their special interest groups, which frankly they won't deal with labor economic and population realities. Howard Dean was on Ratigan yesterday, on and on about the Dream act, sidestepping huge economic questions about jobs, taxes from Ratigan. The Dream Act, from what I could tell, was yet another special interest, backdoor bad bill again and this is coming from someone who believes kids of illegals who have done well in school and so on, should be rescued somehow.

You cannot get the left to deal with sane economic policy and economic realities, putting American workers first and foremost, anymore than you can deal with the right.

Which makes me question the entire structure of the U.S. government. Seems parliamentary systems are slightly better. For the U.S. to get real change we have to get a FDR or a Teddy Roosevelt into the White House and we know it sure isn't that situation right now.

Over on DK, there is a movement to change the Senate rules for a real filibuster. My immediate thought was, for what? So you can pass this absurd open borders agenda and pay no attention to the labor market? Democrats had plenty of time to pass something on Chinese currency manipulation, on trade, they should have passed the corporate tax loophole if they tried....they did not fight for a single major agenda item that was the reason they got into office in the fist place, esp. in those areas that flipped back red this election, with trade/manufacturing/jobs being at the top of that list. Instead, you have Joe Corporate Representative Lieberman, of all people, pushing for the one thing they did manage to get through, the repeal of DADT.

It's ridiculous, they should be demanding just one page bills, just these one change policies, one line....be passed. They could make a world of difference, instead we get these corporate written loophole 2000 page monstrosities which are usually disaster.

The data that you present is the right response to the 60 Minutes hysteria. Who benefits from that hysteria? Don't know their names specifically but the end result is easy to figure out. Drive down pensions, wages, and expenditures in the middle of a nasty recession with U6 at 16% and more rigorous estimates at 23%.

What is is about this rate or real unemployment tha fails to spell EMERGENCY to those running the show?

Your point on viable alternatives is also well taken. In the case of California, we're in for some innovation from Governor Brown. He has some exciting possibilities and alterantives.  Expect something innovative and very different.

Emergency and Depression in policy terms should be synonyms for most people. That is how we once could laugh at the following exchange:

Daddy Warbucks, its President Roosevelt on the phone, he says it's urgent

Everything's urgent to a Democrat.

That was when Democrat meant FDR, not what we got now.

The US Government wonders why they are distrusted by so many according to recent polls, when they distribute unemployment figures that are so transparently false, they insult the intellegence of many. They are aware of the disinformation used to calculate the unemloyment rates.

In addition, at my age the chances of obtaining work are less than 8%. Yes Virginia, Age dicrimination is alive and well, and living in the US, regardless of Federal Law.

Did you get that number from some study, if so where? I agree with you that age discrimination is brazen, institutionalized and in some industries it's surreal, high tech we've seen age discrimination past the age of 30! We could literally do a "where's Waldo" contest to find anyone, anyone at all, who isn't an executive and doing the tech work with a gray hair on their heads in Silicon valley. I'd bet that prize would go unclaimed.

It's just at epidemic levels and considering so many had their retirements denied, wiped out, it's even more critical to confront age discrimination. These people need jobs!