Two economic reports today give further evidence the economy is in a recession with precarious and dangerous conditions unlike any past experience. The Federal Reserve reported today that Industrial production plunged by -0.54% in February. This sharp decline comes after an even worse decline (-0.58%) in October left a quarterly decline from Q3 to Q4 of 2007. That is, overall Industry output in February is below levels reached last July. It is worse for the Manufacturing sector with an output decline in Q4 and a -0.24% decline in February, plunging production now back to levels lower than last June.

As I continue to emphasize, 75 months since the last recession ended in November 2001, the growth of US production has been less than half the growth in normal economic cycles, comparable only with the period of severe double-dip recession from 1980 to 1986. The growth of Manufacturing output is the weakest since the Depression. 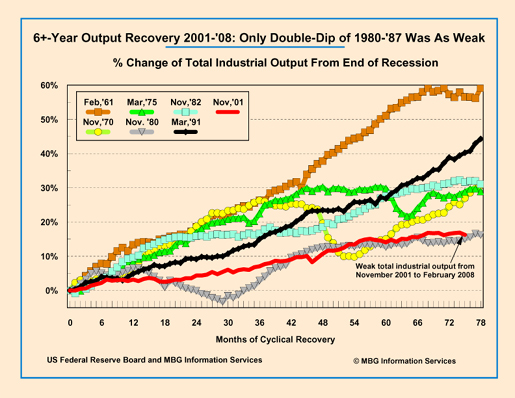 Which is why today’s Commerce Dept, BEA report on all US Current Accounts for Q4 and full-year 2007 is especially instructive. Over the 92 days of virtual economic stagnation in Q4 of 2007 the US nonetheless suffered a Current Account trade deficit/production shortfall of -$172.9 billion -- -4.9% of GDP. Over the past seven years of increasingly hollowed-out industrial competitiveness and GDP growth far slower than world growth, the US produced -$4.3 trillion less than it spent in Current Account deficits. For 2007 alone, the production/Current Account shortfall was -$738.6 billion -- again more than -$2 billion each day. 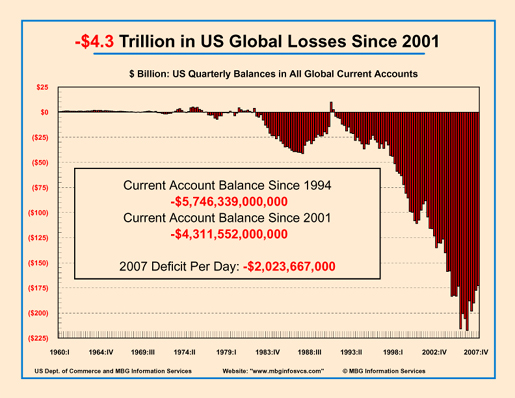 Particularly in light of unprecedented US debt levels, this unprecedented lack of US competitiveness has very wide-ranging implications for the economy and for policy-makers. The Federal Reserve faces an unprecedented range of conflicting objectives in maintaining orderly credit and foreign exchange markets. Worse, with no industrial and trade policy strategy or administrative means to manage the massive economic forces it has unleashed, the US may soon experience the economic aftermath equivalent to that other irresponsible campaign of shock and awe.

Watching what seemingly is becoming fictitious capital (Wall Street), I'm wondering when the chickens will come home to roost due to the hollowing out of the America in terms of production, manufacturing.

Reading this makes me suspect the US will have to go all the way to 3rd world status before corporations start shopping for yet another cheap labor market across the globe and then realize it is now the United States.