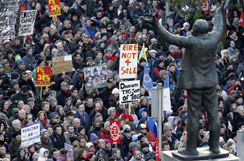 Yesterday 100,000 people took to the streets. Why are people running out into the cold in droves, shouting default to deaf ears? The terms of the EU-IMF bailout.

It's the same ole song and dance of yore. The Banksters privatize profits and socialize the ruin. What are they cutting? Pensions, social safety nets and retirement. Below are just a few bullet points from their plan. See a pattern?

The list goes on and on. Screw the people, bail out the banks.

The unemployment rate in Ireland is 14.1%.

Incentivize getting off the dole when there ain't no jobs and whose fault is this anyway? The workers? Nope, they are just the ones who are supposed to pay for those lovely gambling chip derivatives, tax havens and shell companies.

The Irish Times focuses in on the lovely interest rate 5.83% on €85 billion, as a loan. Guess who gets the money? The Banks:

The European Union has approved an €85 billion rescue package for Ireland which, if drawn down in its entirety today, would attract an average interest rate of 5.83 per cent.

Of this €10 billion will be used to immediately to recapitalise the banks to bring them up to a core tier 1 capital ratio of 12 per cent, with a €25 billion contingency.

The remaining €50 billion will be used to meet the budgetary requirements of the State.

Ireland has also secured an extra year – until 2015 – to meet its target of reducing its budgetary deficit to 3 per cent.

Under the terms of the deal the State will contribute 17.5 billion of the required funding, €12.5 billion of which will come from the National Pension Reserve Fund and €5 billion from “other domestic cash resources”.

You know what Ireland won't touch? Their corporate tax rate of 12.5% and all the games corporations play with tax shelters.

Simon Johnston says Ireland's debt is more like 150% of GNP and notes the press is using GDP instead. If you recall, Google managed to lower it's tax rate to 2.4%, in part by running corporate profits through Ireland first. Simon Johnson:

At least 20 percent of Ireland’s G.D.P. is from “ghost corporations” that have little or no real activity in Ireland. Corporate taxes are set at 12.5 percent, but leading global corporations are able to construct complicated schemes involving other offshore tax havens that reduce their effective tax rates to the low single digits.

David Malone, in who bankrupted Ireland, describes more how multinational finance companies set up subsidiaries in Ireland due to their lax banking laws. Yes, our friends, derivatives and shell vehicles for tax havens are the Godzilla dancing the Jig.

German banks set up subsidiaries in Ireland. These subsidiaries were often registered as completely Irish companies. Back in Germany the German regulator (BaFin) had strict and enforced rules. Very good rules for the most part. Far, far better than Britain or Ireland. But these good rules, properly enforced meant German banks could not do many of the most lucrative and in hind sight reckless kinds of deals.

So the German banks would do the figures and work it all out in Frankfurt, then send a banker over to Ireland, get them to sit at 'their' desk in Ireland, in the Irish bank, and do the deal there. The legal registration of the deal and the 'oversight' were all Irish. This is known in the financial world as jurisdictional arbitrage. You and I would call it cheating if we were feeling charitable and lying if we weren't.

The Banker flies back to Germany, where the German bank hasn't done any deal, and therefore has done nothing wrong. The deal was properly overseen and approved by the appropriate Irish financial authorities and the profits would be banked at a very happy Irish bank. If any management of the 'deal' was required an Irish company would be hired, there are many, and an Irish manager often living not far from Cork, would 'manage' the money in and out.

Gets worse, many have been warning of a domino effect:

It is now common knowledge that there is a potential domino effect of European sovereign debt contagion in roughly the following order:

While some people have been writing about this for well over a year, many others have joined the party late (there are now over 600,000 hits from a Google search discussing this topic.)

It is also now common knowledge that while Greece and Ireland have relatively small economies, there will be real trouble if the Spanish domino falls.

There is some talk of forcing creditors of insolvent nations to take a hair cut, but currently bondholders escape scot-free. What a concept, forcing a hair cut on derivatives and other private investment vehicles? Nah, surely not! Let's rob the Pension fund instead!

European finance ministers backed a Franco-German compromise on post-2013 bailouts that watered down calls by German Chancellor Angela Merkel for investors to be forced to take losses to share the cost with taxpayers. The ministers agreed that a future crisis-management system won’t automatically cut the value of bond holdings, easing away from a proposal that led investors to dump assets of Portugal, Spain and Italy.

Next up, Portugold and Spain. Yup, let no crisis go to waste and move to cut social safety nets at all costs.

Maybe Democracy should be relabeled of the people, by the people and for the people....except when a corporate lobbyists object or big business wants some cash.

Here's a lively blog on the Irish crisis. They make some excellent points, including the disparity of wealth betweeen the bond holders and Ireland.

From the blog Golem XIV-Thoughts - The scam behind the Irish "crisis" is exposed. This is a very valuable analysis.
Who are the bond holders we are bailing out?

SO.... on one side we have Ireland whose bond holders, its people, have between them a total GDP wealth of 0.207 trillion euros. Who are being FORCED, against their will, to pay Anglo Irish bank's debts to its bond holders, who between them hold 20.8 Trillion euros . The people of Ireland are paying to, and protecting the wealth and power of, people who have 100 times more wealth!

I have a host of references where each post is going into great detail. The photo is lifted from a 50 photo spread from AP/Morrison photographer, covering the protests, first link I thought the masses protesting to a statue of a long dead political leader was so symbolic! Awesome photo and he has many many more on the first link.

I'm linking to the blog you list and covering this is obviously the Irish press (two links) and then Naked Capitalism is really following on this, as in digging out nitty gritty the MSM misses.

The WSJ seems to have an insider journalist track, so in terms of nitty gritty before it gets out there, they seem to be on the scene.

Deep in the WikiLeaks was a most damning revelation about Official Chinese perfidy. It seems that the Politburo is the hand behind all the cyber DDOS attacks on this Government's computers. Meanwhile Hillary and Obama are focused on leak control reminiscent of Nixon's dance with Ellsburg over the Pentagon Papers.

A functional government would be angry and outraged over attacks on its cyber assets. There would be calls for huge tariffs and even an embargo. Not this government. But the trade with China goes on for the same set of reasons that Portugual, Ireland, Spain and Greece are suffering under the heel of the International Bankers and the rest of their corporate allies.

Just as Standard Oil supplied aviation fuel to the Luftwaffe, and Watson sold Hitler the Hollerith Card readers used to imprison the Dutch Jews, so Corporate America deals with Chinese with the blessing of a govenrment that is corrupt beyond anyone's imagination.

Let's be sure about this. The Administration has known that the Chinese DDOS attacks for months, and the dance goes on.

¶ A global computer hacking effort: China’s Politburo directed the intrusion into Google’s computer systems in that country, a Chinese contact told the American Embassy in Beijing in January, one cable reported. The Google hacking was part of a coordinated campaign of computer sabotage carried out by government operatives, private security experts and Internet outlaws recruited by the Chinese government. They have broken into American government computers and those of Western allies, the Dalai Lama and American businesses since 2002, cables said.

That China report, current overviewed on the front page, documents cyberattacks from China as well as industrial espionage and our government does NOTHING about this! Even worse, the U.S. China security and economic commission has been writing about similar events for YEARS! It's just incredible, they have Chinese nationals in American universities stealing R&D, tons of intellectual property stolen, magically showing up as cheaper Chinese technology...

NOTHING happens! That's why I wrote up the China report overview with a "war" analogy and phrasing...because economic war is to me what China has been waging and there is real war as well.

I think I just read today that China helped or didn't do something about N. Korea obtaining nuclear technology, it was really serious.

But on the economic front it's just astounding how this government just is walked on and that's Bush/Clinton too.

Zerohedge has the server details here.

No surprise on this one, but how strange Amazon servers would be involved. I'm surprised this didn't happen much sooner, but shutting down websites is also one scary
thing, where's the line between censorship and freedom of speech and the press?

There are some real horror stories with people posting even worker abuse, even violations of U.S. labor law and some judge gives injunctive relief to shut down a website who mentioned it...

now that seems absurdly in the realm of censorship.

On wikileaks, one, I don't find any of this information that revelations and I do get concerned with national security, ya know people like to destroy Americans and frankly the last thing I'm personally concerned about is their civil rights.

That said, being able to just shut down websites on a dime doesn't sound too great in terms of free speech, free press.