The Federal Reserve's Factory Production report shows a 0.9% increase for July 2011 Industrial Production, otherwise known as output for factories and mines. June, May and April were all revised, +0.4%, +0.2% and -0.3% respectively. June's revision is a +0.2 percentage point increase. To sum up a conclusion on this month's statistics: reports of America's economic death are greatly exaggerated. Here is the Federal Reserve's detailed report. 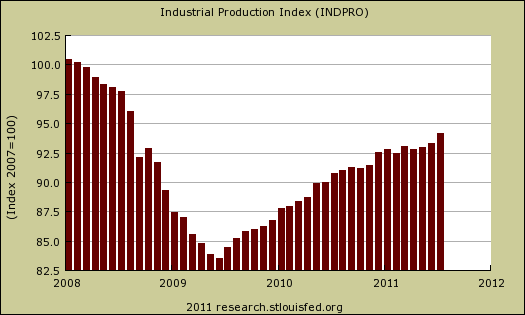 The heat dome maybe torturing the country but it helped utilities jump 2.8% in a month. Autos had a good month, up 5.2%.

Manufacturing output rose 0.6 percent in July, as the index for motor vehicles and parts jumped 5.2 percent and production elsewhere moved up 0.3 percent. The output of mines advanced 1.1 percent, and the output of utilities increased 2.8 percent, as the extreme heat during the month boosted air conditioning usage. Here are the major industry groups yearly industrial production percentage changes. Utilities does have this summer's heat dome effect included. None too good for extreme heat to be a factor in boosting output.

Below is the graph of raw capacity, indexed against 2007 output. This is just how much capacity does the U.S. have to make stuff. Look at how total capacity has declined for the first time in the historical data. This index represents the raw facilities, potential to make stuff. Raw capacity is the underlying number by which utilization is calculated. This month capacity increased +0.2. We are back on the rise, but still below pre-recession levels. 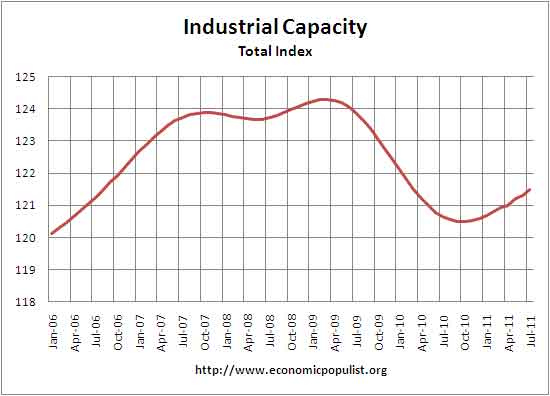 Production increased for all of the major market groups in July. The output of consumer goods advanced 1.1 percent; even so, it was only 1.3 percent above its year-earlier level. Consumer durables recorded a gain of 3.6 percent. Automotive products posted a jump of 5.9 percent to lead the increase in durables, as motor vehicle output rebounded after the supply chain disruptions that resulted from the earthquake in Japan. Output also increased for the other major components of durable goods, with gains of nearly 1 percent or more in both home electronics and miscellaneous goods. The output of nondurable consumer goods rose 0.5 percent. Most of the increase of 1.5 percent in consumer energy products reflected the jump in utility output. The production of other nondurables edged up 0.1 percent, as a gain in foods and tobacco was mostly offset by decreases in clothing and chemical products.

In July, the index for defense and space equipment increased 0.6 percent after having fallen 1.1 percent in June. Production for this market group has advanced, on net, since the end of last year, though at a slower pace than during 2010.

The output of construction supplies increased 0.3 percent in July, its second small monthly gain following a large jump in May. Over the past 12 months, the index for construction supplies has moved up 4.4 percent; nevertheless, the index in July remained more than 20 percent below its average level during 2007. The production of business supplies gained 0.8 percent in July; even so, it has increased only 1.3 percent during the past 12 months and has reversed little of the decline from late 2007 to early 2009. 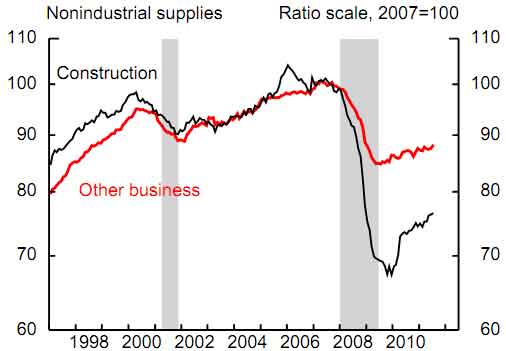 One of the more interesting graphs is high tech capacity utilization, and industrial production a special aggregate, shown below. While industrial production is up 8.3% for the year, communications equipment dropped -0.4% for July and is up only 0.8% for the year. These high tech sectors seems to correlate to when the high tech industry offshore outsourced in droves to China and communications equipment is one area that is being offshore outsourced.. Capacity utilization keeps dropping and this month was another -0.9%. 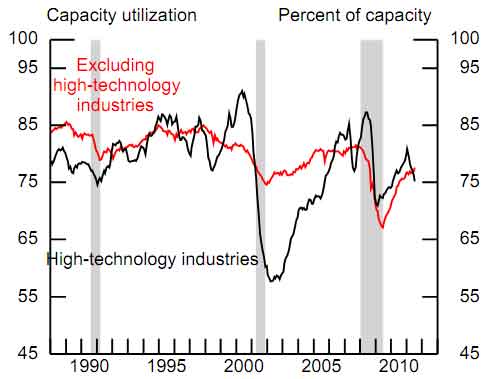 Last month's overview, the original report, not revised, although the graphs are updated with revisions, is here.

The BEA defines the relationship between GDP and the Industrial Production index:

The IPI is a monthly series that measures output in manufacturing, mining, and electric and gas utilities: Federal Reserve Statistical Release G17. Individual indexes of industrial production are constructed from two types of source data: (1) output measured in physical units and (2) inputs used in the production process (e.g., production-worker hours). GDP is a quarterly series that measures the market value of the goods and services produced by labor and property located in the United States. The aggregate GDP measure that corresponds most closely to the IPI is a GDP for goods measure that consists of durable and nondurable goods within personal consumption expenditures, fixed investment, change in private inventories, and net exports (Table 1.1.5). GDP values production in terms of purchasers’ prices, the final prices paid by consumers and by other final-demand sectors. The IPI values production in terms of producers’ prices paid to manufacturers by wholesalers, by retailers, and, in the case of direct sales, by consumers. These differences may explain some of the discrepancies between the growth in the IPI versus the growth in GDP goods because, for recent periods, much of the growth in GDP goods has been in the retail trade and wholesale trade industries rather than in the goods-producing industries. For example, in 2003, the real value added of retail trade industries grew 3.6 percent, whereas, the real value added of goods-producing industries (measured in producers’ prices) grew 1.2 percent (GDP by Industry).

So, with that, while business inventories and trade implied significant downward revisions to Q2 GDP, this revision, basically a doubling of IP for June, implies a slight upward one.

For the quarter, IP was revised up 0.3 percentage points. Assuredly that will reflect an upward revision in GDP.

How much, I haven't gotten to that level of relationships (and I think I'd be paid a hell of a lot more money if I had my own 100% thorough GDP estimation algorithm!), but I don't think it will be 0.7% revision like I earlier implied, maybe more hovering around 1%. (which is good).

The de-industrialization of the U.S. - 55750 reads
Safeway Skewered for Throwing 6,000 Workers Under the Bus in Video Parody - 333830 reads
The Cost of Left-Wing hate - 118040 reads
Senator Bernie Sanders on Income Inequality - 6938 reads
Tax and Spend Democrats - 12736 reads
A Sign Of The Times - Long Term Unemployment Expanded to 5 Years - 46486 reads
Will the NY Attorney General Bring Doomsday Charges Against Wall Street? If So, How Long Will He Survive? - 1152052 reads
Employee Abuse Runs Rampant In America - 71364 reads
Oh Those Socialist French - 6192 reads
One cold snap uses 11.5% of US natural gas supplies; 8 more weeks like that and our gas storage will be totally empty - 88216 reads