The pharmaceutical industry once was a haven for biologists and chemists who did not go into academia. Well-paying, stable research jobs were plentiful in the Northeast, the San Francisco Bay area and other hubs. But a decade of slash-and-burn mergers; stagnating profit; exporting of jobs to India, China and Europe; and declining investment in research and development have dramatically shrunk the U.S. drug industry, with research positions taking heavy hits.

Since 2000, U.S. drug firms have slashed 300,000 jobs, according to an analysis by consulting firm Challenger, Gray & Christmas. In the latest closure, Roche last month announced it is shuttering its storied Nutley, N.J., campus — where Valium was invented — and shedding another 1,000 research jobs.

Corporations have been offshore outsourcing advanced R&D, plus importing into the United States hordes of foreigner workers to displace U.S. STEM professionals. While the pharmaceutical industry had it's mass R&D exodus to India and China bloodbath in 2006, the same thing is happening in most Computer and Engineering related areas and has been for over a decade.

“There have been many predictions of [science] labor shortages and . . . robust job growth,” said Jim Austin, editor of the online magazine ScienceCareers. “And yet, it seems awfully hard for people to find a job. Anyone who goes into science expecting employers to clamor for their services will be deeply disappointed.”

We have the drum beat, never ending, of graduating more STEM majors. Just recently the OECD demanded more STEM labor. The answers are clear, why would Americans study such difficult subjects, go into debt up to their eyeballs when there are no jobs, not for Americans at least. The occupation field message is clear, no U.S. citizens and especially no older, black, Hispanic female need apply. Note the pathetic age discrimination incorporated into the CECD demands. Literally the OECD insists ages of STEM workers must be between 25 to 34.  Are you kidding me?   Anyone hear of adult education, switching careers or at least having one until age 65?  Right there might be part of the problem. Who wants to bust their ass, obtain difficult skills, only to experience age discrimination and be out of a career at the barely breathin' ripe old age of 35?

Generally U.S. students are indentured servants, going heavily into debt with no job. Why would anyone go heavily into debt when their job, income and career has a target on it's back to be cast aside and displaced in a matter of years?

One of the more notorious and absolutely outrageous skills shortage claims involves job training programs, often funded by U.S. taxpayer money. Instead of training Americans, we have U.S. citizens being excluded from these jobs. Yes, these training jobs are inside the United States. Literally we have only foreigners getting these OPT jobs. OPT provides critical training in high skills occupational areas, very much needed by U.S. citizen students and recent college graduates. Science Magazine sums it up.

Back in the 19th century, American employers regularly posted signs warning that "No Irish need apply." Now, according to a report issued by a group called Bright Future Jobs, similarly blatant discrimination is rampant among certain tech employers in the United States. This time, however, the message is "No Americans Need Apply," which also happens to be the title of the report.

Bright Future Jobs describes itself as "Techies working on the real American Dream." The report analyzes 100 listings posted on the jobs Web site Dice.com, which claims to be "the leading career site for technology and engineering professionals." The ads noted in the report all appear to be aimed at hiring foreigners rather than Americans for jobs in the United States. Some of these jobs appear related to offshoring of work. Although the study only covers IT jobs, it's unclear whether similar practices are also occuring in science fields, especially as companies in the pharmaceutical industry and elsewhere are moving increasing numbers of science jobs abroad.

The ads cited in the report use abbreviations that refer to particular short-term visas and are generally unfamiliar to Americans. They also often promise sponsorship for permanent residency. They therefore "may involve multiple legal violations of discrimination law for a U.S. citizen job applicant who is bypassed based on his or her national origin," says the Bright Future Jobs Web site. The group urges Dice.com to remove such discriminatory ads, which apparently form only a portion of the site's listings.

Writing about the report, Grant Gross noted in an article at PCWorld, "A search on Dice.com Thursday [July 5] found more than 300 job listings for OPT jobs." The Optional Practical Training (OPT) visa is aimed at people who recently received degrees from U.S. institutions. Gross goes on to report an additional 200 listings aimed at foreigners still studying at U.S. colleges and therefore eligible for the Current Practical Training (CPT) visa, and 160 ads seeking holders of the H-1B temporary worker visa. "Exclusively for OPT/CPT students," announces one ad highlighted by Gross.

In 2009, at the height of the recession, there were more foreign guest workers than American technical workers. That's not from a lack of U.S. technical workers. Janco Associates tracks I.T. jobs and gives alarming statistics which show employment is not good in I.T.

IT hiring is up since June of 2012 – 24,600 IT jobs have been added in the United States according to the Bureau of Labor Statistics (BLS) – not enough to employee the number of IT graduates from US universities.

Computer World's Patrick Thibodeau says it best about the absurdity behind claims of a worker shortage:

Employers want superstars, with resumes as rich as the high school student who not only played quarterback for the football team, but led the math club to a state tournament, had a leading role in Macbeth and hit a 4.0 GPA.

Additionally employers want foreigners, all too often, at the expense of U.S.engineers, it's become almost a corporate cultural phenomena. Reality says something different. The United States actually graduates more U.S. Citizen STEM than there are jobs.

Take a look at the total number of payroll jobs in some STEM related occupational areas. Think there is a shortage of engineers? What about the very obviously underemployed and unemployed ones that lost these jobs from the below graph? 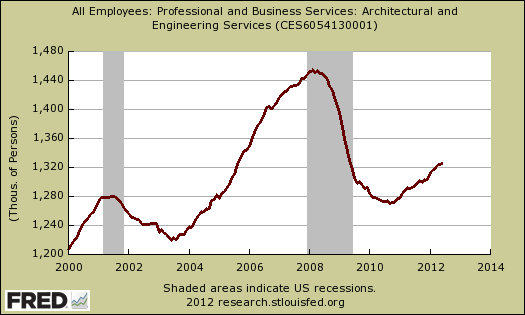 Want to see offshore outsourcing in action? Take a look at the loss of jobs associated with computer & electronics durable goods. 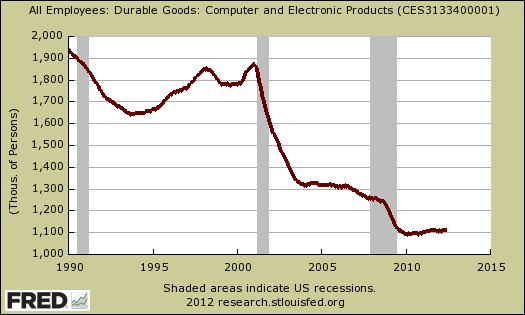 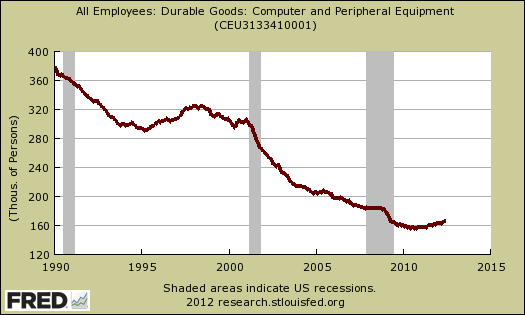 Finally semiconductors, which are the parts that go into computers & electronics. While some may claim these graphs represent just manufacturing jobs, frankly not so. Manufacturing begets R&D, not the other way around and these payroll statistics are all jobs associated with semiconductor manufacturing, not just assembly workers.

Here's another. Below are Internet ISPs, servers, system administration and such related web hosting jobs. Needless to say the Internet has exploded past 2000. Clearly these jobs are heavily offshore outsourced. 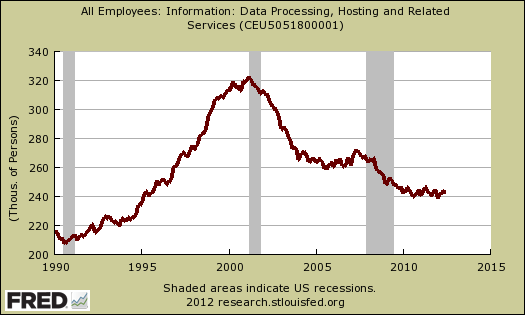 To make matters worse, the BLS counts foreign guest workers and illegal immigrants in the above graphed payroll totals. That's right, while H-1Bs are displacing U.S. citizens, literally they are counted, instead of the American in the occupational employment statistics. That displaced America is instead counted as a Walmart worker, retail trade, or wherever they ended up working, if they did. The BLS does not track underemployment for Americans in the above statistics.

Next time you see more propaganda claiming we might miss the next Mark Zuckerberg or the next Steve Jobs, OMG, unless we import more foreigners, look at the above. Such messaging is simply more CEO worship. Those initiatives are not the kind of start-up that will scale and generate the kind of good jobs America needs. As long as corporations like Apple offshore outsource manufacturing, focus on the personality of the CEO is simply not a U.S. job creator.

Folks, there are at least 300,000 unemployed electrical engineers and computer scientists. These occupations fill advanced R&D jobs. Literally we do not know how many H-1B Visa holders are in the United States. The GAO:

The total number of H-1B workers in the U.S. at any one time--and information about the length of their stay--is unknown, because (1) data systems among the various agencies that process such individuals are not linked so individuals cannot be readily tracked, and (2) H-1B workers are not assigned a unique identifier that would allow for tracking them over time--particularly if and when their visa status changes.

The best estimate we have is from 2009 gives a whopping 650,000 H-1B Visas. The H-1B is just one foreign guest worker Visa category out of many, but it is used extensively to displace advanced R&D STEM workers. Literally the H-1B is called the offshore outsourcing Visa by the India BPO industry.

What's the bottom line here. We literally have college graduates in STEM who cannot get a job. We have discrimination for jobs in the United States against U.S. citizens and no legal action is taken. We have the never ending lobbyist drum beat demanding more worker displacement of Americans by manipulating the U.S. immigration system.

Think about how hard Neuroscience is and how difficult it is to earn a PhD degree. Then contemplate how our government is demanding more foreigners, more immigration, more guest workers instead of employing Americans who already have the expertise.

No wonder there is a jobs crisis. This is a classic example how the American dream has been sold down the river. Politicians on both sides of the isle have sold out America at the bequest of labor arbitraging multinational corporations and foreign nations wanting our jobs.

Safeway Skewered for Throwing 6,000 Workers Under the Bus in Video Parody - 342387 reads
March global oil surplus at 17.7 million barrels per day; 2nd qtr surplus to be at 6.2 million bpd despite OPEC-led cuts - 5695 reads
Manufacturing Monday: The so-called Big Three, and the taxpayers' money - 15626 reads
Democrats Running on Empty and Living on a Prayer - 28087 reads
Massachusetts turned Red, but that color isn't what you think it is - 15691 reads
House discusses 401k/IRA confiscation - 223315 reads
The Economic Populist Site Rank, Statistics and All of That Jazz - 130042 reads
Bankruptcy Hell - The Sequel to ForeclosureGate - 21735 reads
As Our Economy is Outsourced to China the Obama Administration Once Again Does Nothing - 36695 reads
Jobs Program Redux - 12637 reads