The Philadelphia Federal Reserve Business Outlook Survey is a regional snapshot of manufacturing and it's a blow out this month. The overall index jumped 21.5 points as well as the highest reading since December 2009. 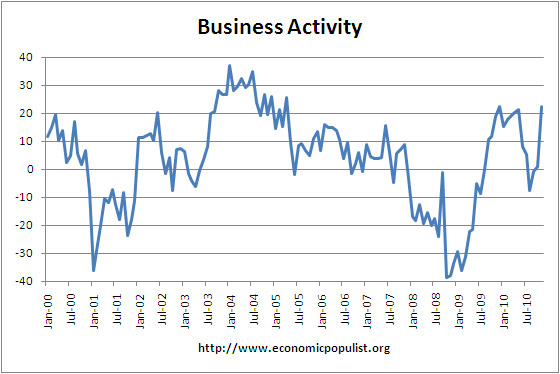 The monthly indexes are shockingly good. Below is the point change from last month's indexes.

The future general activity index increased 8 points, to a reading of 49.0, its highest reading in eight months. The future new orders and shipments indexes also remained at relatively high readings, with about half of the reporting firms expecting growth over the next six months. More firms expect to increase employment over the next six months (29 percent) than expect to decrease employment (7 percent). The future employment index edged 1 point higher to its highest reading in six months.

These numbers are so amazing, one needs to look at them in context. Below are graphs on the monthly diffusion indexes for the Philadelphia regional manufacturing economy. 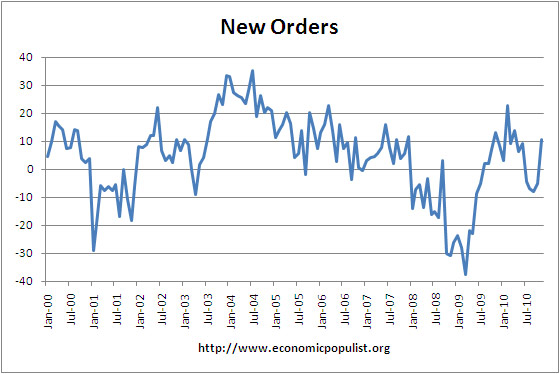 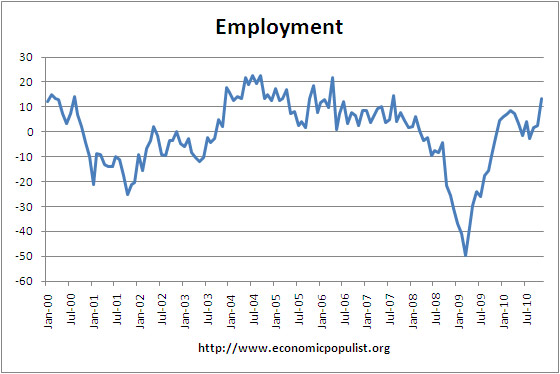 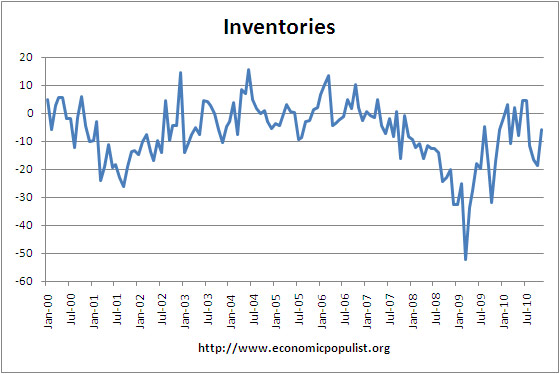 From the report on prices paid & prices received:

Price increases for inputs remain relatively widespread this month. Thirty-eight percent of the firms reported higher prices for inputs this month. The prices paid index, which had increased in the previous month, increased 3 points. On balance, firms continued to report declines in prices for their own manufactured goods: Slightly more firms reported decreases in prices (16 percent) than reported increases (14 percent). The prices received index remained negative for the sixth consecutive month, although it increased 7 points this month. 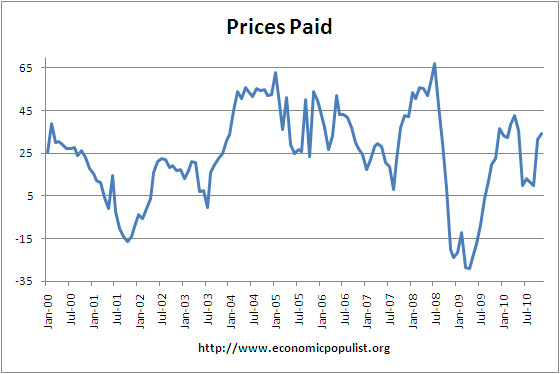 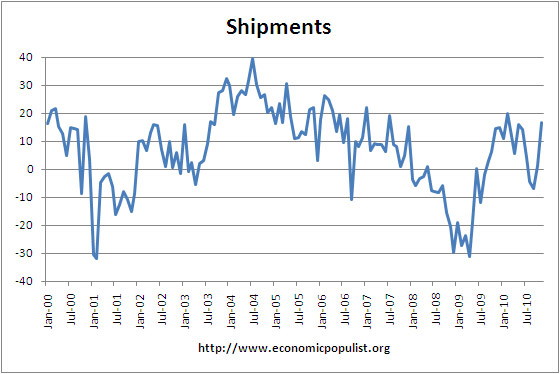 Gets better still. This survey of about 85 regional manufacturers shows they are increasing capacity usage and also planning on more capital spending. The average capacity utilization rate went from 65.6% in 2009 to 72%, a 7.6 percentage point increase in putting their factories to work. Capital spending is now up to 38% in 2010. This is beyond double last years 16.3% of these manufacturers' reported plans to buy more equipment and plant facilities.

What the hell happened in Philly but who cares, it sure beats what's happening in manufacturing New York.

END_OF_DOCUMENT_TOKEN_TO_BE_REPLACED

Corruption in Higher Education - 25674 reads
Unemployment during the "Great Recession": a Continuing Structural Change in the Economy - 28179 reads
The de-industrialization of the U.S. - 54796 reads
Too Big To Fail - Today's Financial Services Committee Hearings - 10445 reads
Why are the same people still in charge of banks they destroyed? - 7847 reads
Friday Movie Night - The Greed Game & America's Bubble Addiction - 14967 reads
California is officially flat broke - 95220 reads
The Deflationary Bust Deepens: May 2009 edition - 11215 reads
Mortgage Deal Under Discussion - Obama Administration and Big Banks - 176249 reads
No Long-term Recovery without real Wage Growth - 22220 reads
Will the NY Attorney General Bring Doomsday Charges Against Wall Street? If So, How Long Will He Survive? - 1151192 reads
New York Post Claims Census Falsifies Unemployment Figures - 876345 reads
Safeway Skewered for Throwing 6,000 Workers Under the Bus in Video Parody - 332410 reads
Tax Cuts for the Rich Do Not Generate Jobs - 244532 reads
U3 and U6 Unemployment during the Great Depression - 242848 reads
Delusions of Normalcy 2011 - Dismal Scientists Cheer Up - 231879 reads
The war on the middle class - 213164 reads
Obama Promises to Create 2.5 Million Jobs, but in What Countries? - 192321 reads
How to Dump Your Muni By 60 Minutes - 185420 reads
Mortgage Deal Under Discussion - Obama Administration and Big Banks - 176103 reads