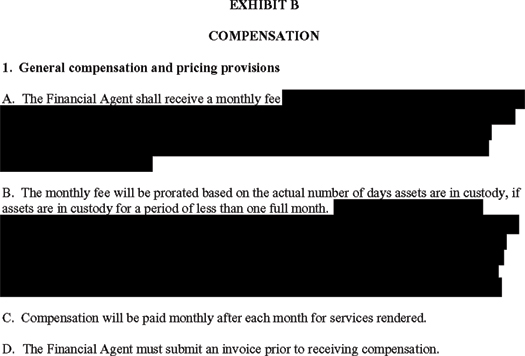 That's $700 billion dollars of U.S. taxpayer money and this is the transparency.

Such acts have prompted a new website, Bail Out Sleth who has more documents blacked out like the above.

A firm with a conservative business reputation and historic ties to the U.S. government, the bank is the custodian for $23 trillion in investments and has a lot of experience in financial auctions. Those attributes make it well-suited to the complex task it faces in the rescue plan, financial analysts said.

The Treasury Department released a copy of the contract, but the monthly fees the bank will receive were blacked out. They will be announced in a matter of weeks, Treasury officials said, once other contracts related to the $700 billion rescue plan have been negotiated.

What? There are no other contracts managing auctions of toxic assets, so why black out the payment now? And what about the other contracts, fees, deals and payments? I don't see any justification in this, including obscuring some benchmark for other contracts and bids.

The contract award comes just a day after the Treasury Department compelled the Bank of New York Mellon to take a $2 billion infusion of federal cash in exchange for preferred stock. Eight other major banks were similarly strong-armed into joining the program.

Right, this is after yesterday it was revealed that the same banks who brought you the financial crisis will receive $70 billion dollars in bonuses:

Wall Street and bank directors, which are called “Fat Cats” by the American media, will receive 70 billion dollars – a regular bonus for “success” in this year, despite the fact that the financial system in 2008 feels like the Great Depression from 1929, writes the Guardian.

The leaders of the six largest banks in the United States will receive million dollar amounts as a part of the rescue plan, worth 70 billion dollars, despite the criticism of the US government. The money will be spent on salaries, bonuses and redundancy payments, even though the state of the banking sector is alarming.

The government will not only own shares that we expect will result in a reasonable return, but also will receive warrants for common shares in participating institutions. And we expect all participating banks to continue to strengthen their efforts to help struggling homeowners avoid preventable foreclosures

Right, the banks sure were helping out homeowners and making sure they weren't foreclosed on earlier right?

It seems like the bailout process is being privatized with some of the same people who got us into this mess being hired to get us out of it. Bloomberg reports that Treasury Secretary Henry Paulson is hiring as many as 10 asset-management firms to join the lawyers and bankers he is recruiting to implement the government's new $700 billion bank-rescue program.

Alternet has a good post on the blacking out of payments on this contract as well.