L, or Labor, is measured in hours only. Both values are normalized to a base year. Note this normalization to a base year, seemingly now to be 2005, where the mass exodus to China and India on jobs had already occurred. Labor productivity is reported annualized.

Productivity yearly change, which was 2.5%. Below is a output per hours worked graph from 1990 until Q2 2010. Notice the huge spike in 2002, the same year corporations insisted on offshore outsourcing everything that wasn't nailed down, using the recession as cover. Output for the year was 4.1%. Below is the actual output graph. Output is a chained, weighted index and excludes general government, nonprofit institutions, and private households. In other words, washing the dishes faster doesn't count as output and either does the BLS number crunching all of this data. Output correlates directly to GDP. Business output was ~75% of 2009 GDP and farms only accounted for 1% GDP. For Q3 2010 output increased 3.0%. While the great worker squeeze isn't as bad as last quarter, it's still going on, with corporations squeezing blood from a stone. What you see these days in productivity is not what it appears. The press will claim increased productivity is a great thing, but it's clearly not translating into wages for workers. Due to globalization, workers get squeezed, production outsourced and productivity soars. Hence if output increased and productivity decreased, well, that's probably a better sign for the U.S. middle class. It means businesses cannot squeeze labor further and to increase output, they might have to actually pay a few more people. Hopefully those people will be American workers.

The problem with this report is overall output isn't high enough and that means...employers won't be forced to hire U.S. workers.

The Durable goods report is also most telling. While their productivity soars, their labor costs drops. We know new auto workers are making half as much as others and we also know GM employs more people in China than in the United States. Durable goods manufacturing is clearly under labor arbitrage duress.

Native U.S. population is growing 160K per month and Immigration is adding 120K per month. 280K per month is far above the best job creation numbers. The result is not just IT workers browsing garbage but younger native born workers doing Grapes of Wrath stuff picking vegies. We just do not need any more immigration. When pressed, open border crowd uses the safety valve argument: immigration eases tensions in developing countries. But 60 percent or 6.6 Billion world wide live at a standard of living below that of Mexico. Aroound 1.5 Million immigrate to the U.S, or .00025 % of the world population. No real safety valve. 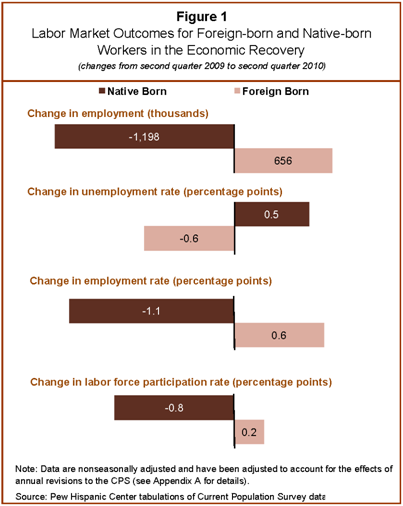 that I want to look at. Something is "wrong with this picture" with our cheap labor pals touting "immigration" as "helping the economy but the above sure looks like U.S. worker displacement.

The "foreign born" unfortunately is not divided up by immigration status or ethnicity. I can tell you the Hispanic unemployment rate, which does include illegal immigrants, is higher than the national average....so these "foreign born", do not appear to be illegals. I suspect, strongly, that foreign temporary guest workers are in that count.

Right now I'm analyzing the BLS unemployment report and there is conflicting data in it! I'm not making this up, one section seems to be quoting last month's numbers and another has different numbers. Good God.