Friday’s decision, announced by United States Trade Representative Ron Kirk, was in response to a United Steelworkers (USW) Section 301 unfair trade complaint against China. In his announcement, Kirk said, “We take the USW’s claims very seriously, and we are vigorously investigating them.” He said his office would use the next 90 days – the time period called for under World Trade Organization (WTO) laws – to investigate the practices detailed in the USW petition.

The USW wrote up a 5800 page report, detailing China's unfair practices on green technologies. Here are the 5 main broad areas:

China, which has been blocking shipments of crucial minerals to Japan for the last month, has now quietly halted shipments of those materials to the United States and Europe, three industry officials said on Tuesday.

Technology transfer demands, where literally U.S. corporations hand over their know how to a foreign nation, have been long documented. Advanced Research & Development is also being offshore outsourced, not only to China, but India is capturing a large segment as well. 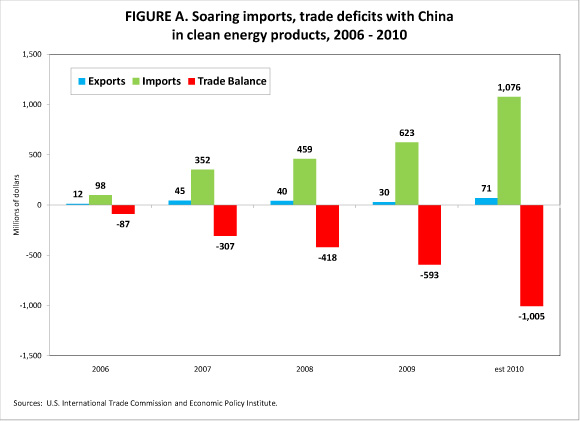 New American Foundation's Leo Hindery knows green jobs are not the answer to the U.S. economy. Instead they are an answer. Hindery outlines five major action items the United States should do to jump start green jobs. Two are about China and their unfair trade practices. Another is to establish a National Infrastructure Bank.

Our unwillingness to date to establish a National Infrastructure Bank (or NIB) is a major obstacle. Long before this Great Recession began, we knew that thoughtful investments in all types of infrastructure, including things green, were one of the top two ways to create lots of jobs and help restore America's global competitiveness, provided the spending was coupled with buy-domestic requirements. (The other way is employment programs for the roughly 5 million unemployed out-of-school youth.) The specifics of this are simple: each $1 billion spent on infrastructure creates on average 25,000 new jobs, and when the investments are for high-tech, energy efficient green things, then the new-jobs figure is on the order of 45,000 per $1 billion spent. An NIB would immediately increase many-fold, and at much lower costs, the infrastructure investment capacities of our federal, state and local governments. It would also make such investments less dependent on annual appropriations; and give these needed investments beneficial access to the private capital markets, large fiduciary investors, and foreign central banks.

In reaction to the U.S. Steelworkers petition and the Obama administration's taking it on, China chastizes the United States for daring to challenge them on unfair subsidies:

A dispute between China and the United States over Beijing’s subsidies to clean energy industries escalated on Sunday when a senior Chinese economic official warned that Washington “cannot win this trade fight.”

A blade for a Chinese-made wind turbine being offloaded in Long Beach, Calif., in May.
In an abruptly scheduled news briefing here, the official, Zhang Guobao, sharply rebuked the Obama administration for opening an inquiry on Friday into the subsidies.

“I have been thinking: What do the Americans want?” said Mr. Zhang, the vice chairman of the government’s National Development and Reform Commission. “Do they want fair trade? Or an earnest dialogue? Or transparent information? I don’t think they want any of this. I think more likely, the Americans just want votes.”

Uh, no China. We want our jobs and our economy back. Create your own damn consumer market.

All this hoopla is just a smoke screen, this administration is just sitting and waiting for the, China coat tails.
ECONOMIC GLOBALIZATION IS THE PLAN, EVIDENT BY THIS ADMINISTRATIONS POLICY TO ALLOW FOREIGN SHIPS A FREE ECONOMIC PASS TO DESTROY OUR WATERS.
A December 2009 report for Congress describes import cost would rise with national ballast water legislation.
The House voted for regulations 395-7 in 2008, but the legislation was not taken up in the Senate during this administration.
The continued delay tactics of more comment, study, and only a proposal for a long time line to implement standards for ballast water and foreign ships dumping human pathogens and virus illustrates this administrations reason for delay is not to hinder economic globalization, even at the expense of our environment and manufacturing competitiveness.
The following report for Congress in DEC 2009 “Although estimates of the costs of ballast treatment may be imprecise and vary from vessel to
vessel, there is some general agreement on average costs.14 For example, it may cost an estimated $400,000 per vessel for modification of container/bulk vessels to use onshore ballast water treatment facilities at California ports. More generally, the cost of retrofitting vessels to treat
ballast water has been estimated at between $200,000 and $310,000 per vessel for mechanical
treatment and around $300,000 for chemical treatment.15 Most of this expense will be borne by
foreign shipping companies, as the U.S. flag fleet is a small percentage of the global fleet,16 and
likely passed along to consumers of products imported on these ships.”

I didn't know about this bill, but there are others the house passed, very good, which the Senate didn't bring to the floor.

Thanks for posting information on it.

I thin this is why Pelosi is so under attack and Harry Reid, not so much. It's the Senate where every piece of good legislation gets stopped.

Right, Obama so far hasn't done anything on trade, offshore outsourcing and he could through the executive branch.