China not the Biggest Holder of U.S. Debt

The below chart shows China holds only 9.5% of U.S. debt. This graph was made by political calculations, who are cranking out some very nice political eye candy with a lot of comparisons to Canada. 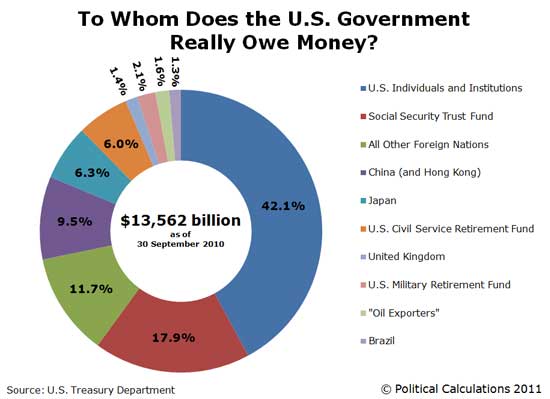 The New York Times took G.E. to task for paying zero taxes on $5.1 billion dollars in profit in 2010.

The company reported worldwide profits of $14.2 billion, and said $5.1 billion of the total came from its operations in the United States.

Its American tax bill? None. In fact, G.E. claimed a tax benefit of $3.2 billion.

There's your imagination at work, as the author notes. This is a must read to see how large multinational corporations are all about manipulating tax codes around the globe, as well as engaging unregulated finance. It used to be corporations made things and paid their taxes. Now business models seem to be about shafting Uncle Sam or worse, claiming Uncle Same owes them $3.2 billion dollars.

A professor wrote a blog post about the GOP ties to a conservative lobbyist group and in response, they demanded his emails, seemingly gunning to get him fired.

Cronon published his first-ever blog post, an exploration of the influence of the conservative American Legislative Exchange Council on state legislatures and the Wisconsin union fight. This was five days before Cronon published an op-ed in the New York Times saying that Republican Gov. Scott Walker's bid to limit union rights represents a radical break from American tradition.

Cronon, who is president-elect of the American Historical Association, says he believes the request for his emails is a GOP fishing expedition to locate "ammunition [...]to embarrass, undermine, and ultimately silence me." Cronon suspects the GOP is trying to catch him violating a university policy that forbids professors from using e-mail to "support the nomination of any person for political office or to influence a vote in any election or referendum"--a rule he says he hasn't broken.

As we know the banks, credit ratings agencies, executives, have had no criminal charges filed against them for the housing bubble or financial crisis. Yet of course we have prosecution of the little guy for lying on his mortgage application.

Charlie Engle wasn’t a seller of bad mortgages. He was a borrower. And the “mortgage fraud” for which he was prosecuted was something that literally millions of Americans did during the subprime bubble. Supposedly, he lied on two liar loans.

“The Department of Justice has made prosecuting financial crimes, including mortgage fraud, a high priority,” said Neil H. MacBride, the United States attorney for the Eastern District of Virginia, in a statement. (Mr. MacBride, whose office prosecuted Mr. Engle, declined to be interviewed.)

Apparently, though, it’s only a high priority if the target is a borrower.

A new study shows 65 million workers are being disqualified for any job due to criminal background checks.

Sixty-five million Americans—or one in four adults—have a criminal record. But employers—including major companies like Bank of America, Omni Hotel, and Domino's Pizza—routinely post job ads on Craigslist that explicitly exclude such applicants, according to a new report conducted by the National Employment Law Center (NELP), a labor-affiliated advocacy group.

The practice appears in some cases to be against the law.

Econbrowser has a great graphic analysis showing the correlation between commodities and actual demand and also shows how costs are unevenly distributed. This is infuriating considering the Federal Reserve focuses on core inflation, which excludes food and energy, since they are volatile. Explain that one when we have a regressive distribution of food and energy inflation effects upon the working poor, or 50% of all Americans. 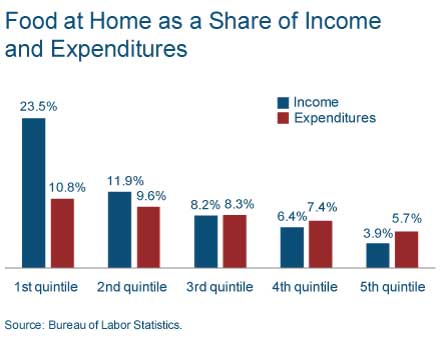 The Loss in State Revenues is Due to Manufacturing Job Loss

It's no kidding that somehow the lobbyists have created a disconnect between income, wages and debt. The AAM has this handy chart showing manufacturing job losses correlated against state tax revenues. 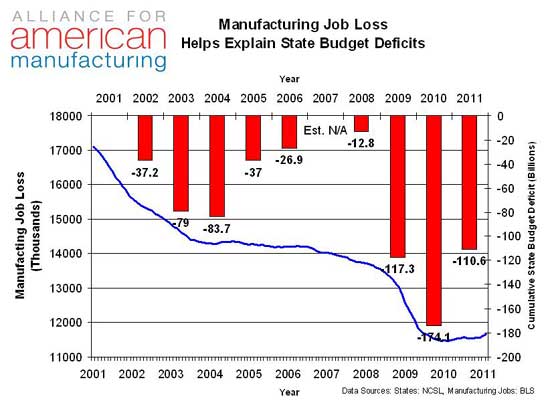 Geraldine Ferraro was the first women Democratic party vice-presidential candidate in 1984 and was outspoken during the 2008 election with all of the misogyny and sexism going on. Ferraro was a trail blazer.

You all must read the harassment details at Goldman Sachs.

It's positively disgusting. What's even worse is you have misogynists, sexist/harassing comments on the site reporting the events.

Unreal, Good God and this is the financial institution which runs our government. Read it and see, the U.S. is going backwards, as in over a Century backwards on labor generally.

"The Loss in State Revenues is Due to Manufacturing Job Loss"

I distinctly recall this exact point being made, as a logical consequence of the 'free trade' movement, by Ross Perot when running for president back in the 1990s.

Could it be that not enough of us were willing to take a chance on someone from outside the two major parties?