The March 2012 employment statistics for individual states gives us yet more not so great news for American labor. Employment only increased in 29 states and decreased in 20. The three states with the largest payroll employment decrease are Ohio, -9,500, New Jersey, -8,600, and Wisconsin, -4,500. February showed payrolls gaining in 42 states.

The unemployment rate can drop because people are getting jobs, or they are plain dropping out of the labor market. Seeing 39% of the regions have their payrolls drop in a month is not a good sign. Other states did gain jobs. The largest, in order, are New York, +19,100, California, +18,200, and Arizona, +13,500.

By percentages, the largest payroll increases were in Arizona, a 0.6% increase, Nebraska along with the District of Columbia, both having a 0.5% increase. Maine payroll jobs dropped -0.5% and Wyoming declined -0.3%.

In terms of unemployment rates Nevada is still the worse, as shown in the below BLS map. 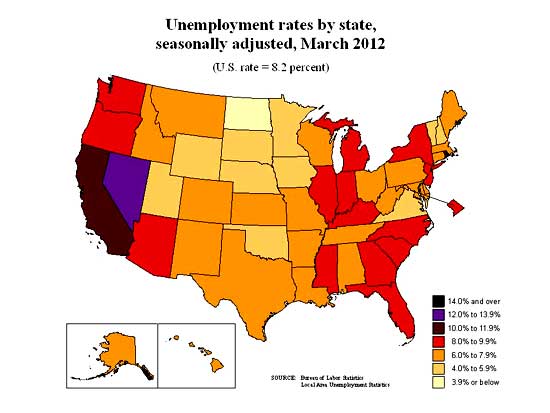 Rhode Island has an 11.1% unemployment rate and California comes in next with 11%.

Another not so great news is 16 states unemployment rates have not budged from a year ago. By payrolls we also have not so great news. Only 27 states and the district experienced statistically significant increases in employment for the entire year. Increases were in Texas, +245,700, California, +181,000, and New York, +155,300. These states also have some of the highest high populations. Wisconsin lost a statistically significant number of jobs, -23,900.

This is just incredible considering the recession was declared over 2 years, 9 months ago (July 2009). To look up your state's unemployment rate, click this link.

Regulars might notice less posts recently. I've been very ill so now I'm trying to touch on reports, news I find significant. Bottom line, this never ending economic malaise....the only ones who seem to think it's gone away are the press and of course politicians.

You are the only one who consistently speaks out on the losses the U.S. worker is bearing. Our corporations do not feel our degrees are good enough and our cities and towns are only worth their attention if we bribe the greedy bastards with tax breaks. Their profits reside off our shores so we see no tax money on the goods we buy but do not manufacture. Or if we do the bring their own workers here illegally on bogus visas. I learned that here.

Only you point these things out and I thank you.

This recent employment gain is already slowing down. I hope we are surprised with a pickup. Austerity waits around the corner few reading this will benefit. Im very nervous

If others are up for authoring, just email me. We have other authors but they come and go, some as they can get to it. Its true to write, one needs to have their quality on max high, but this site is open to others.

I am extremely nervous too. We have Obama, which good God, "corporate lobbyist wish lists are us". I don't know how this administration can face the nation after such a let down on that promise of "change". Then, we have Romney, who openly endorses a host of policies that will bring down the U.S., we have Congress, the most corrupt bunch of power players who only pass corporate lobbyists written bills and finally a fringe bunch of crazies who somehow think screwing the poor and middle class will make it all better.

We haven't even gotten to insane state governments where it's either liberal, bureaucratic fantasy land "bullet train" CA or Wisconsin land with insane conservatives who believe all ills are due to unions and collective bargaining.

I hear ya on that it seems the entire labor market situation is being stuffed under the rug, it's tiring, going on so long and nothing ever changes, no one policy that really will help the U.S. middle class, even when they are claimed they will, such as "Stimulus" (where funds, jobs, went straight off to foreign nations, not effective spending and most ridiculous tax cuts).