Home prices fell in 19 of 20 MSAs and both Composites in November from their October levels. In November, only four MSAs – Los Angeles, San Diego, San Francisco and Washington DC – showed year-over-year gains. The Composite indices remain above their spring 2009 lows; however, nine markets – Atlanta, Charlotte, Chicago, Detroit, Las Vegas, Miami, Portland (OR), Seattle and Tampa – hit their lowest levels since home prices peaked in 2006 and 2007, meaning that average home prices in those markets have fallen even further than the lows set in the spring of 2009.

Below is the yearly percent change in the composite-10 and composite-20 Case-Shiller Indices. As you can see, there is clearly a new decline going on for 2010. This is what is meant by double-dip in declining home prices.

S&P is now confirming a double dip in home prices, it's official.

With these numbers more analysts will be calling for a double-dip in home prices. Let’s take a moment to define a double-dip as seeing the 10- and 20-City Composites set new post-peak lows. The series are now only 4.8% and 3.3% above their April 2009 lows, suggesting that a double-dip could be confirmed before Spring.

Below is a table are all of the cities of the composite-20 index. This should give a feel for the bubble and now current devaluations. Notice the stronger correlations in price declines to the unemployment rate for 2010, such as Detroit. 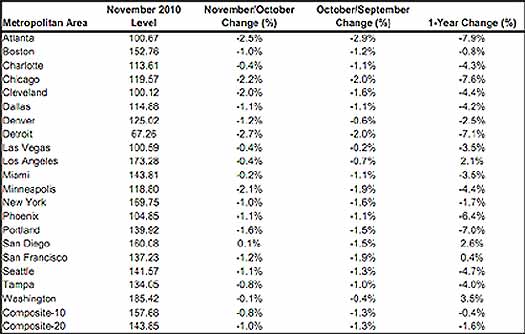 Below is a very useful graph from Calculated Risk, showing how much prices have fallen from their peaks in the Composite-10 cities. Calculated Risk has additional custom graphs and data analysis. 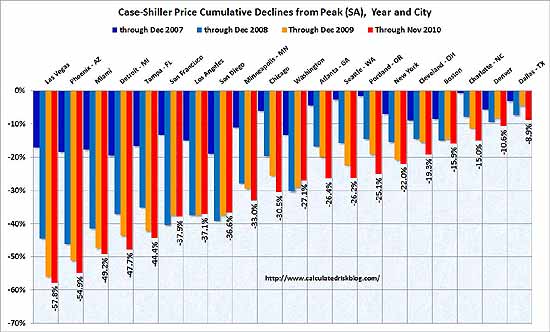 S&P does a great job of making data available for further information and analysis on their website.