NAR reported their December 2012 Existing Home Sales.  Existing home sales decreased -1.0% from last month and inventories are down to an absurdly tight 4.4 months of supply.   Existing homes sales have increased 12.8% from a year ago.  While this is the highest annual increase in five years, existing home sales on a monthly basis are not to even 2009 levels.  Volume was 4.94 million against November's 4.99 million, annualized existing home sales. 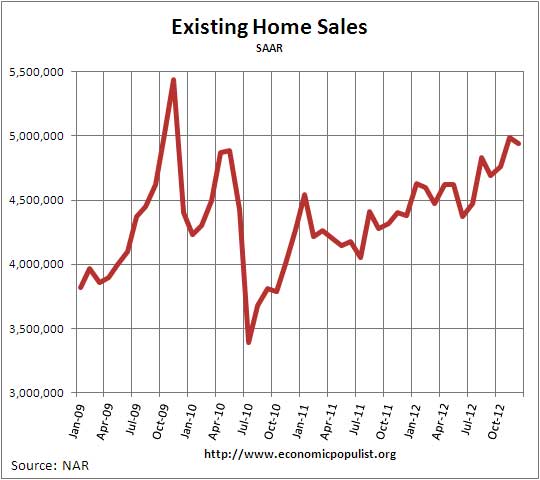 Taking existing home sales by year is a different story.  For the 2012 year, existing home sales increased 9.2% from 2011 and volume was 4.65 million sales.  This is the highest annual number of sales since 2007's 5.03 million and the strongest yearly percentage increase since 2004.  This month's existing home sales decline might have been pushed off the fiscal cliff as there were capital hill whispers about rescinding the mortgage interest tax deduction as well as potential massive tax rate increases.

Existing home inventory decreased 8.3% for the month or 1.82 million existing homes for sale.  We have not seen inventory levels this low since January 2001.  This is a 4.4 months supply and down 21.6% from a year ago.  Inventories by months to sell at current sales volume is now at 2005 levels. Short supply also partially explains the increasing prices.

According to RealtyTrac, foreclosure filings are down 36% from 2010, but only 3% since 2011. Below are the 2012 annual levels. Compare these figures to existing home sales annualized volume.

Below is the breakdown by types of existing home sales and one thing to notice is how the bargain price of distressed properties has increased.

According to NAR 30.1% of existing homes were on the market less than a month.

The median time on market for all homes was 73 days in December, up from 70 days in November, but is 26.3 percent below 99 days in December 2011. Short sales were on the market for a median of 117 days, while foreclosures typically sold in 45 days; non-distressed homes took 74 days.

Yet all cash sales, implying investors are still snatching up homes, are still high and first time homebuyers have remained a consistent 30% of all sales.

All-cash sales were at 29 percent of transactions in December, compared with 30 percent in November and 31 percent in December 2011.

The average time to complete a foreclosure nationwide in the fourth quarter increased 8 percent from the previous quarter to a record-high 414 days.