The Federal reserve announced Operation Twist, an action from 1961 where the Fed swaps out treasuries of short maturity lengths, for longer ones, all in an attempt to flatten, or twist the yield curve. From the Economist:

Operation Twist has long been considered a failure. Early studies found little impact on yields, vindicating those who argued that the price of a security depends only on expectations—of inflation, for example, or monetary policy—not its relative supply. Eric Swanson, an economist at the Federal Reserve Bank of San Francisco, disagrees. Previous studies, he reckons, didn’t properly isolate the influence of Operation Twist from countervailing factors. By studying the behaviour of bonds right around announcements related to Operation Twist, he concludes the programme lowered yields by 15 basis points in total.

From the FOMC statement:

The Committee decided today to extend the average maturity of its holdings of securities. The Committee intends to purchase, by the end of June 2012, $400 billion of Treasury securities with remaining maturities of 6 years to 30 years and to sell an equal amount of Treasury securities with remaining maturities of 3 years or less. This program should put downward pressure on longer-term interest rates and help make broader financial conditions more accommodative. The Committee will regularly review the size and composition of its securities holdings and is prepared to adjust those holdings as appropriate. 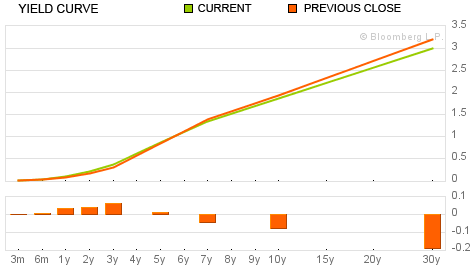 But, wait for it....they are going to re-invest in those toxic assets, otherwise known as mortgage backed securities, or MBS related derivatives.

Supposedly this is to support low mortgage rates, yet, why MBSes have to do with lower mortgage rates, at least that's the sound byte. More, putting funds into MBS, or toxic assets, derivatives, should boost their price pushing out other investors in these risky investments. If you want to see an Economists' version of Rube Goldberg, or the most convoluted trickle upon excuse for buying Mortgage backed securities, read Forbes:

What the Fed is doing is flattening the yield curve in order to ease financial conditions and credit creation and shift capital “from investors and lenders to consumers.” The Fed has also pledged to provide additional support for mortgage markets by reinvesting agency debt and MBS directly into more agency MBS in the secondary markets, as opposed to putting it into Treasuries.

The idea is that in a consumer economy, shifting money into risky assets and from investors and lenders to consumers will spark consumption. A “portfolio balancing effect” should spark a “wealth effect” by which investment in productive, albeit risky assets, spurs job creation, rising wages, and aggregate (consumer) demand which in turn feeds the whole cycle.

But the theoretical approach is fundamentally flawed, according to Richard Bove of Rochdale Research. “By flattening the yield curve,” explains Bove, “Operation Twist reduces the incentive of the holders of funds to provide funds for production and real growth” by putting incentives in place for money to go short, not long.

Politics are spilling over to the Fed and this article overviews the Republican bullying of the Federal Reserve.

I don't know if the Fed is doing everything it can or not, but if people aren't working, does it matter if they lower interest rates? Lower interest rates helps companies to invest, but large corps already have plenty of cash and they are not investing it in the US.
1) Bring back tariffs, renegotiate FTA's such that countries that don't play by our rules (including labor and environmental) don't get free trade agreements and watch the jobs pour back.
2) Strictly limit NIV's and limit outsourcing of current jobs and watch the jobs return.
3) Finally, change accounting and tax rules to encourage companies hiring and keeping employees instead of using contractors or outsourcing

Any one of these would help the US economy tremendously, all three would make the US a true superpower again. Tax revenues would increase, welfare programs would drop and the economy would be on track without having to raise taxes. Maybe social security could even be saved! Yet none of these three ideas are entertained by any politicians.

Truly. Unfortunately the Fed cannot force Congress to enact policies, legislation and at this point, considering their insane agenda while America suffers.....I wish they could.

I agree, every single place we know massive jobs were lost and that is bad trade deals, offshore outsourcing, bringing in foreign labor, illegal labor, a massive implosion in real estate/construction, should be deal with directly.

First, every new college grad should be guaranteed a gov. subsidized internship, at least, in their field. I don't care if it's $15/hr but they need that first job work experience and corporations would be given a gift if that was government subsidized.

Next, everyone who is a professional should be brought together in incubators to get support, pay to form new companies. The standards would still apply, have to be a viable business plan, they would have to present, just like new ventures are funded today, have to have prototypes and so on, but a system to get them together, support to formulate teams, business plans, prototyping, investor pitches and so on should be done. We have millions of people with enormous talents and skills who cannot even get a Walmart job.

Schools should be done for safety but what they really need are teachers and a cutting on the bureaucracy that goes on in schools, plus a hell of a lot of technology additions, books, supplies and so on. The building, well, it can't fall down around their heads but one can live with a crappy building for the moment.

They should start a national manufacturing policy, agenda and major incentives to manufacture in the U.S. with U.S. citizens are hires. They should institute a major buy American program for all federal, state, local government agencies.

They should ban the offshore outsourcing of all federal, state and local contracts.

Would we get any of this common sense, practical policies where their opposites can be directly tabulated to show we have lost millions and millions of jobs due to them?

Of course not. Instead we have some strange Rube Goldberg MBS purchase which I think stinks to high heaven. I think bundling MBS and passing them around like poker chips is one of the original problems. People's homes and their mortgages just should not be an investor vehicle to this degree in my view.

A great platform! I like it. "Robert Oak for President."

My concern with government subsidized internships is that they may put us back in a similar situation as the NIV's. Cheap labor replacing experienced employees. Instead of hiring employees, companies will hire interns at low cost and with a government subsidy only to fire them when the internship ends and replacing them with more interns. If other reforms are put in place, this may be less of a concern.

They are already replacing Americans with foreigners and using the OPT program, supposedly on the job training and I believe they get a tax break additionally, to displace U.S. workers and put foreign students on these Visas, in these jobs.

So, pretty much if I tout a jobs program or tax subsidy or whatever, I will require tying it to U.S. citizenship, in many cases exclusively, in some cases LPR or legal permanent resident (green card).

It's more than legal to do this. Most DoD jobs require a security clearance and also require U.S. citizenship, so there isn't any excuse to extend those requirements to government (U.S. taxpayer funded) subsidized job training, direct job programs.

I hear ya, the displacement of U.S. STEM (and also teachers, so much for unions!) with non-immigrant status foreign guest workers is absolutely another globalization, labor arbitrage mechanism.

Now that the Federal Reserve has basically told us that their ultra-low interest rate policy and experiment with quantitative easing have not worked, they are admitting that the world’s economy is clinging to the edge of the fiscal precipice by promoting “Operation Twist”.

As shown here, a Federal Reserve President, James Bullard, admitted in 2010 that it was highly likely that Fed policies were going to lead to a Japanese-style "Lost Decade" as shown here:

Here's a brief quote from his conclusions:

"Of course, we can hope that we do not encounter such shocks (i.e. deflation), and that further recovery turns out to be robust but hope is not a strategy. The U.S. is closer to a Japanese-style outcome today than at any time in recent history."

The Fed has backed themselves into a corner but still hasn’t come to the realization that the situation is hopeless….at least publicly.

Of course, it's a Fed thing, you have to read between the lines, but it seems to me that Bernanke did recently say that the Fed had done all it could ... passing the ball over to the source of revenue bills ... who are going nowhere, holding, don't care about penalties ...