The Federal Reserve FOMC released their updated economic projections and frankly they are weird.  GDP estimates were lowered yet the official unemployment rate projections were also lowered.  The rule of economic law is lower economic growth means less jobs and hires so how one can have subdued GDP with better unemployment figures is none too clear.  One thing the new FOMC projections might imply is the Fed is seeing a decoupling of economic growth from the health of the labor market.  Below are the FOMC's new figures.  GDP is Q4 to Q4, the unemployment rate is for Q4 as is the PCE price index.

Overall the FOMC implied the economy is ho-hum and they will continue their open ended quantitative easing at the same phenomenal levels.  From the FOMC statement:

We have an unemployment rate target of 6.5% before the FOMC considers changing policy.  Right now the unemployment rate is 7.7%.  This implies the Fed is planning on continuing their massive MBS and U.S. Treasuries buying until Q4 2015 potentially, although the Fed is now emphasizing tapering and could end as soon as Q3 2013.  The FOMC emphasized there would be no cliff, on/off switch, or trigger as they adjust their asset purchases and the rate would be much more about smooth flows.

To support continued progress toward maximum employment and price stability, the Committee expects that a highly accommodative stance of monetary policy will remain appropriate for a considerable time after the asset purchase program ends and the economic recovery strengthens. In particular, the Committee decided to keep the target range for the federal funds rate at 0 to 1/4 percent and currently anticipates that this exceptionally low range for the federal funds rate will be appropriate at least as long as the unemployment rate remains above 6-1/2 percent, inflation between one and two years ahead is projected to be no more than a half percentage point above the Committee's 2 percent longer-run goal, and longer-term inflation expectations continue to be well anchored. In determining how long to maintain a highly accommodative stance of monetary policy, the Committee will also consider other information, including additional measures of labor market conditions, indicators of inflation pressures and inflation expectations, and readings on financial developments. When the Committee decides to begin to remove policy accommodation, it will take a balanced approach consistent with its longer-run goals of maximum employment and inflation of 2 percent.

One comment on CNBC called the Federal Reserve's actions the quantitative easing liquidity wave tsunami.  During the press conference there were many questions on just how the Fed is going to wind this all down.  Most assume the Fed will just hold this massive portfolio until maturity instead of selling assets which would throw markets for a loop.  Below is a graph of the Fed's total assets and as of March 13, 2013 the balance was a whopping $3.167 trillion. 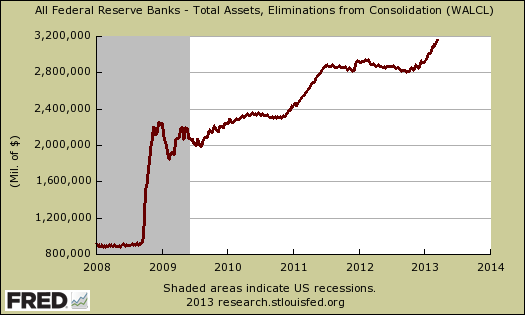 Bernanke's conference opening remarks commented on the sequester harming economic growth as well as the never ending high unemployment rate.  He blew off the recent jump in gas prices by claiming it's temporary due to refineries shutting down.  If inflation jumps up, the Fed won't be able to continue their QE tsunami.

Bernanke said the rate of QE could change and emphasized the unemployment rate and GDP are not triggers where policies will suddenly stop.  Instead they are using models to tapper and adjust the rate of asset purchases depending upon economic conditions.

There were funny moments in the press conference, such as Bernanke actually talked to an unemployed person and ridiculous moments, such as questioning Bernanke's tenure.  More serious questions are how the Fed is going to wind down their massive quantitative easing and how effective the asset purchase policy really is.

Additionally, Bernanke seems in denial about the record low labor participation rates and is touting the party line that it is just demographics.  We're sorry Bernanke, this just isn't so and less women in the workforce probably has more to do with impossible working conditions for single mothers than demographics and actual choice.

Below is the full press conference and ain't it grand the Fed is using Youtube.  Overall the questions from the press are good, so it's worth watching.