The Government Accountability Office has completed their audit of the Federal Reserve. Guess what the GAO found? Conflicts of Interest. It seems the Banksters are sitting on the Federal Reserve board, supervising their own institutions. The fox is guarding the hen house in other words. One of the most damning GAO discoveries is the timeline of Goldman Sachs turning into a holding bank and a Goldman Sachs board of directors, Stephen Friedman, also serving as the New York Federal Reserve chair. The below timeline and summary is from pages 34-35 of the GAO report: 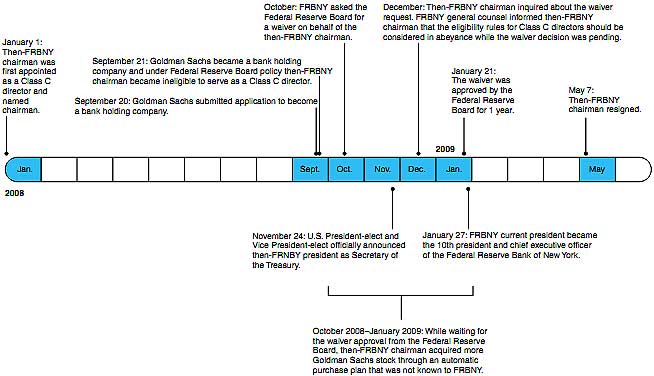 During the end of 2008, the New York Fed approved an application from Goldman Sachs to become a bank holding company giving it access to cheap loans from the Federal Reserve. During this time period, Stephen Friedman, the Chairman of the New York Fed, sat on the Board of Directors of Goldman Sachs, and owned shares in Goldman's stock, something that was prohibited by the Federal Reserve's conflict of interest regulations. Mr. Friedman received a waiver from the Fed's conflict of interest rules in late 2008. This waiver was not publicly disclosed. After Mr. Friedman received this waiver, he continued to purchase stock in Goldman from October 2008 through January of 2009. According to the GAO, the Federal Reserve did not know that Mr. Friedman continued to purchases Goldman's stock after his waiver was granted.

In other words, you have a NY Fed Chair, helping make sure his company, Goldman Sachs, has access to cheap money, which will guarantee a strong profit for Goldman Sachs and buying more stock in Goldman Sachs. Why this is watered down as a conflict of interest, instead of a criminal offense is beyond comprehension. And there are more.

Lest we not forget, JP Morgan Chase CEO Jamie Dimon also was a New York Federal Reserve board chair:

Jamie Dimon, the CEO of JP Morgan Chase, served on the board of the Federal Reserve Bank of New York at the same time that his bank received emergency loans from the Fed and while his bank was used by the Fed as a clearinghouse for the Fed's emergency lending programs(p. 40).

The JP Morgan Chase Bear Stearns acquisition is a prime example of privatize the profits and socialize the risks.

Senator Bernie Sanders, one of the sponsors of the original audit the Fed amendment in the Senate, published a damning GAO report analysis, which we reprint some of the bullet points below:

Below is a Dylan Ratigan interview with Senator Sanders on the report results:

Oh yeah, the GAO also found the Fed is primarily a bunch of white guys. The GAO report starts with all sorts of demographic data and frankly, the point of the audit was to expose how the financial sector in the United States controls the Federal Reserve, it's an inside job and a circle jerk. The point is large Too Big To Fail financial institution executives are sitting on the boards of the very government organization which gives these same private financial institutions free money, sweat heart deals and on top of it, is a dumping ground for worthless toxic assets. Yeah, sure the Fed is a bunch of white guys with college degrees, MBAs in finance or whatever. Good God, we hope they have expertise in economics, banking and finance, which hopefully still does not imply corruption.

Why the GAO focused on outdated demographic data is beyond me, but it buries the real meat of the report and defocuses the purpose of the audit in my opinion. Since when does skin color guarantee representation of a minority group anyway, a prime example being President Obama with record black unemployment and a loss of black economic power going back to before civil rights? The GAO literally mistitled their report, Federal Reserve Bank Governance: Opportunities Exist to Broaden Director Recruitment Efforts and Increase Transparency. Bottom line, you can skip the first 25 pages of the report to get to the conflicts of interest. Senator Bernie Sanders has additional report analysis details, located here.