Today the ECRI Weekly Leading Index was at 9.8%. Notice from the graphs below, (fxmarketalerts.com), this index was -10% around the start of this recession. 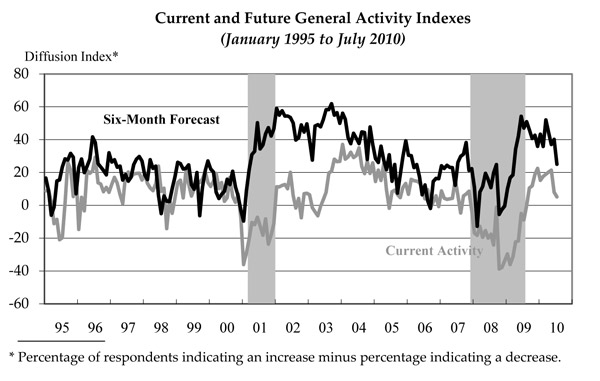 The survey’s broadest measure of manufacturing conditions, the diffusion index of current activity, decreased from a reading of 8 in June to 5.1 in July. The index, although still positive and suggesting growth, has fallen for two consecutive months. Indexes for new orders and shipments also suggest a slowing this month: The new orders index fell 13 points, to its first negative reading in 12 months, and the shipments index decreased 10 points but remained positive. Indicating weakness, indexes for both delivery times and unfilled orders fell and were in negative territory this month.

The University of Michigan Sentiment Index cliff dove to 66.5 from 76.0 in June. 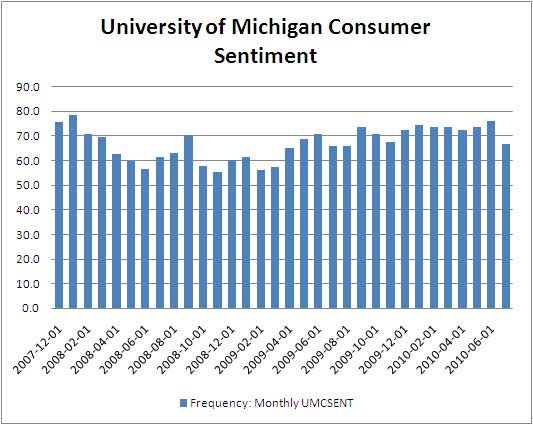 From the JOLTS job survey we see horrific numbers on job openings. We might have 4,504,000 hires in May, but we also have 4,085,000 fires (well, not all fires but the bottom line there are 4.7 people needing a job per opening).

Let's not forget the trade deficit, which jumped 4.73% in a month. Notice how those who are in denial on jobs being offshore outsourced and foreign guest workers are imported instead of hiring Americans for American jobs never mention the deficit word? Sorry folks, deficits do matter and it is a reflection of jobs lost, economic growth lost and the shipping of the American dream and her economy overseas.

On the employment front, we need 10,600,000 jobs just to get to the miserable labor market conditions before this recession.

Dr. Doom has come out of the woodwork and declared the global double dip has arrived. I disagree with a double dip, but only on a technical level.

The bottom line is the economy is goin' south again and frankly it is this government's fault. They saved the banks and not the people. They saved the toxic assets and not people's homes. They poured trillions of Federal Reserve loans into the banks and we still have a $1 trillion dollar Fannie and Freddie bail out with no end in sight. Congress literally claimed derivatives are profitable and did nothing about them in legislative practice. The great corporate casino is open for business, not a sheriff in sight, with all of that money going into their gambling schemes and not into investing in America.

They refused to cancel Federal and State offshore outsourced contracts, when we desperately need those jobs. They refuse to stop their inane global labor arbitrage agenda through foreign guest workers and manipulation of immigration policy. They refuse to confront China on it's currency manipulation or trade practices and they refuse to be smart and implement true Keynesian stimulus. Instead we got this Faux pas version, which did not require funds be used to Buy American and Hire America. This sent billions of U.S. taxpayer dollars helping out other national economies instead of our own.

They pass health care laws which strengthen the insurance companies and for profit sector, doing nothing about costs, they pass window dressing and call that Financial reform when it does nothing about the real causes of the Financial crisis. Bottom line, they simply will not, refuse, deny to pass real policies and plans to save the United States and her economy, middle class.

Even more frightening, the new grassroots movement of radical conservatives would bring this country to it's knees. What they spout is pure economic fiction that sounds great in a sound byte only.

Here's the big news, without the U.S. middle class, you don't have a national economy in the United States.

The University of Michigan's consumer sentiment index fell a dramatic amount today. How dramatic? It was historic.


In the 32-year history of this survey, it's fallen by 9.5 points or more on only six other occasions:
*
October 2008: The month after Lehman Bros. collapsed;
*
October 2005: The month after Hurricane Katrina hit;
*
September 2001: The month terrorists attacked America;
*
August 1990: The month Kuwait was invaded;
*
March 1980: The month the stock market plunged and confirmed that the nation had entered a recession.

Only once did the sentiment index fall so far without being accompanied by an event so big that it's in the history books: December 1980.

I didn't realize they refuse to release the graphs and full report, so I made up a graph to show the pattern.

I don't think there is a single one I wrote up this month that was stellar or did not show at least slowing.

Obama said on CNBC that the stimulus created/saved millions of jobs! Banana Ben and Turbo Timmy to the rescue! Gawsh those guys are like superheroes. The stimulus is working guys! The economy is recovering! Green shoots right around the corner!

Notes the only time it did this was in the 1980's, between the two recessions (commonly referred to as the double dip).

I personally have a hard time believing a sentiment index causes anything, but I do believe it reflects something and that's the situation, the economy has not recovered at all for the U.S. workforce, middle class, those of us who work, need wages and do not trade in derivatives.

Bloomberg. So, I'm not hallucinating.

Last number crunch I thought I had done something wrong because I was coming with 2% and less with the latest ISM.

I'll try to crank some more numbers but I'd say this is either about right and maybe even a little high.

With these latest numbers, we're still getting in June numbers, and I don't see a negative GDP number out of those for Q2, but Q3....hmmmm.....

I'm not surprised because I think technically that's what it's going to end up being, but a new report calls it.