The report describes the difficulty of any intellectual property infringement enforcement in China. It's clear the legal system is not up to par and even if someone wins their case, the damage awards are trivial. Because Chinese businesses know they can get away with rip-offs, all sorts of intellectual property theft occurs in China. This is from DVD pirating to full bore copying of an advanced design or product of a U.S. firm.

The report gives some data on intellectual property sensitive industries in terms of economic growth, wages and jobs:

How did China become the globe's manufacturer in the first place? Foreign firms, with their intellectual property, of course offshore outsourced manufacturing to China. Now China wants not only the manufacturing, but the intellectual property as well. No surprise China would not be satisfied with being the globe's cheap labor market and it should not be a surprise China has long term strategies in place to be the globe's dominant economy either. So, in a way, one can only blame multinationals for their never-ending desire to squeeze the U.S. worker by utilizing Chinese cheap labor and financial multinationals looking for absurd returns on emerging economies as well as global banking dominance. Seems nation-states matter after all, especially when it comes to laws and protections.

total U.S. FDI stock in China increased from $9.4 billion in 1999 to $49 billion in 2009. Despite certain benefits that multinationals might gain from producing in China, they also face an array of IPR infringement problems in their supply chain operations. These include increasing competition from Chinese counterfeiters who use sophisticated manufacturing capabilities and cheaper prices to gain market share in China and external markets.

Beyond the brazen copying of copyrighted works, the report notes another reason pirated materials are so prevalent is because the Chinese government requires a domestic supplier for distribution. In other words, pirating is so common because it's the only way to get a copy of a film, CD or piece of software.

Does the Chinese government discriminate against foreign firms on awarding patents in China? The verdict is out, with the report saying some firms believe this is true.

The report notes some interesting patent games, where the lessor, unsubstantial patent categories are receiving increased filings and then Chinese companies are using these inferior types of patents to unjustly defend against patent infringement cases on the actual invention.

This is one of my favorites from the report and again, is almost a reap what you sow to U.S. manufacturers squeezing labor & plant costs:

Problems also arise when companies that are setting up new production facilities in China are required to partner with a Chinese design firm; some design firms reportedly have no qualms about disclosing trade secrets learned in the process.

Here's a good example of the kind of disaster this report is talking about, Advanced Technology Product Exports from the United States to China are declining. Below is the reports graph and possible reasons why. 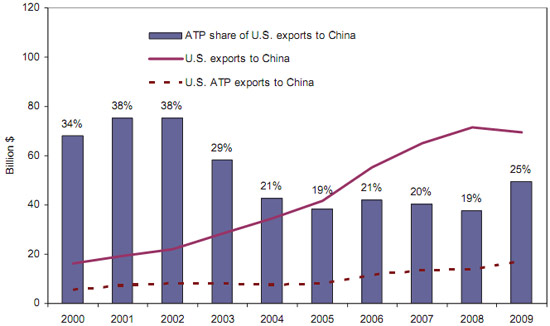 ATP products’ share of total U.S. exports to China has been declining. The share was 25 percent in 2009, down from levels approaching 40 percent at the beginning of the decade. This drop may reflect a shift by China to import from other suppliers, including other Asian countries. It may also be the result, in part, of China’s growing domestic manufacturing capacity for inputs and assembly components. The concerted effort by the Chinese government to develop value-added production domestically has led U.S. firms to increasingly set up manufacturing facilities in China to serve the Chinese market, rather than exporting to China from the United States.

Notice how advanced R&D offshore outsourcing is rarely discussed in the main stream press. But the above implies that's what's happening as well as China outright claiming and developing their own advanced R&D. The report also does not note how many U.S. multinationals literally fired advanced R&D teams in the United States and started advanced R&D research in China. The list of corporations which have created R&D facilities in China is long, from pharmaceutical research to software.

Back to China's indigenous innovation policy, the report gives even a strategy roadmap China is following to become an advanced R&D center, reprinted below. Notice the use of people, often trained or imported to work in the United States, to facilitate new ventures and even technology transfer. Also, notice the use of standards, even going to the ISO international standards bodies to force their intellectual property to dominate an industry, as well as generate additional revenues. 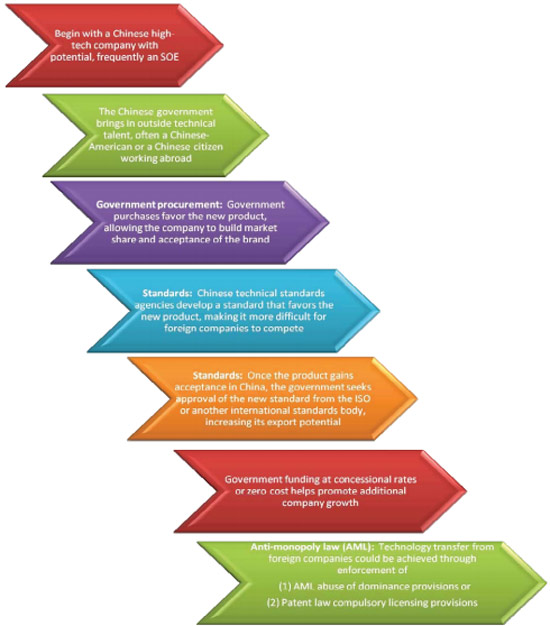 While the report continues to demand China act and start honoring and enforcing protection on copyrights, trademarks and intellectual property,one has to wonder why they also do not demand U.S. multinationals hire, manufacture and innovate at home. Why should the United States protect these private enterprises when they turn their back on America, refuse to hire Americans, invest in America and barely even pay corporate taxes?

The report (large pdf) is at this link.

This is probably great news. There are just minor blurbs so far, but the SEC is probing U.S. attorneys, banks for allowing Chinese to buy, go on the stock market through back door methods.

The U.S. Securities and Exchange Commission has begun a probe into Chinese companies listing on U.S. stock exchanges through reverse takeovers, the Wall Street Journal reported, citing people with knowledge of the probe.

The regulator's move came after hundreds of Chinese companies gained a U.S. listing by merging with dormant shell companies, the Journal said.

The SEC has begun a probe into how U.S. accountants, bankers and lawyers have helped the process, the people told the paper.

the SEC has also begun to target individual Chinese companies for accounting violations and lax auditing practices, beyond a number of previously announced investigations, the people told the paper.

Folks, if you see some details on what's going on, please at least post it in a comment. This is a much bigger deal than what's implied for the U.S. economy.

The ChiComs have used U.S. shell companies for spying, industrial espionage and and takeovers. Money Party shut Lou up for good reasons. Money Party and it's organs like USCOC has one idea: More Money for Me.

I am a Canadian businessman (economist) living in Shanghai.

It is true that China has done much copying, but mostly small and low-cost consumer items like DVDs. In the overall scheme of hundreds of billions of trade, the net effect of this is minor if not trivial. Although not necessarily so to those involved...

But in fact, in substantial areas of technology, China has more than paid its way. One notable example is China's HSR record - the high-speed trains.

China paid Kawasaki, the creator of the original bullet train, more than 750 billion for all the IP, the rights, the know-how, everything. Chinese engineers went to Japan to study with Kawasaki, and Kawasaki engineers came to China to assist in designing and building the first factories for train sets, and helped supervise the ocnstruction of them.

China did the same with Alstom, Siemens and Bombardier, spending in total more than 3 billion dollars in the money of those days. And they were given only the old technology - not the latest versions.

Much of the complaining we hear today can be attributed to what I call 'seller's remorse'. Kawasaki in particular, but the others as well, believed they were so clever, had such great R&D and such a big head start, that they could sell China their old technology and still stay far enough ahead to sell all of China's needed trains.

They believed they had a 30-year head start and were astonished to find that the Chinese combined all the best parts of their newly-purhased technology and created a much superior product in only 5 years. And now Kawasaki's only sales point is that China's faster and cheaper train is a copy of their slower and more expensive one.

Here's a link to an article on my website blog on China's HSR. You might find it informative.

There are also many articles on Trade, International Finance, the RMB and other current topics.