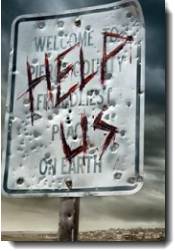 Let's see what would happen to you or me.  We are unable to pay our bills, unless we tap a special line of credit that we've used in the past, one that has never failed us.  We'll have to raise some money and cut some expenses too.

We're tired of paying bills and just want to stop for a while. We file for bankruptcy following all of the required procedures.  The minute we file, we're granted an automatic stay on our debt.  We are now protected, no bills to pay.

Then we get a few visits from creditors. They let us know that they know we can pay.  Other people owed money show up also and ask, what is your problem?  You owe us the money.  You can pay and you will. The combination of angry creditors and recipients of our funds forces us to do what we could have done in the first place.

We tap the line of credit, cut expenses, and increase income. We make the payments we could have made all along.  Once again, we have the choice of fixing things long term or repeating the process yet again.

What would happen to us?  We would certainly hear from federal attorneys and the bankruptcy court.  We lied to gain the stay.  That's more than just inaccurate representations. It's  fraud, a prosecutable offense.  We would also hear from the creditors and recipients of our funds.  They would demand restitution for damages based on any demonstrable harm from our fraudulent default.

In addition to criminal and civil consequences, we would be regarded as shady characters and real fools by our peers.

If Congress refuses to raise the debt ceiling, something it has done nearly seventy-four  times since 1962, we will face similar consequences.

We have been accumulating significant debt since the Reagan administration, the claimed inspiration for many of the new members of Congress.  Democrats and Republicans have participated in the annual tradeoffs of political benefits today versus neglected long term fiscal responsibilities.  Robert Oak's article shows new expenditures contributing to the current debt. The main offenders are the wars in Afghanistan and Iraq and the Bush era tax cuts.  This represents 3.2 trillion in new debt.

What happens if the United States defaults on its debt?

The cost of everything will go up as a result of default.  Why? The credit rating for the United States will be downgraded and cost of borrowing will increase substantially for governments - federal, state, local - and for business.

The cost of credit and the general disruption will have an immediate impact on unemployment.  Remember 2009?  It will be much worse. 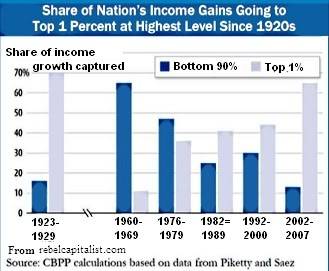 Since the United States has no need to default, the act will tarnish our image even more than it has been tarnished by dysfunctional government, military aggression, and financial fraud perpetrated by Wall Street (see Numerian's article).  We're not the only game in town.  There are alternatives.  Imagine a marginalized nation seen as the world's leading grifter.

The default is not necessary.  When you can't pay your bills, you cut expenses that don't generate revenue, war and defense spending.  You increase available revenues.  The Bush era tax cuts were to expire by now.  Put them back in force.  Those in the top 1% of the income bracket have had a nice run (see graph rebelcapitalist.com).  Let them pay their fair share.

Offer the public input through an open debate based on honest information.  What is the impact of cutting spending in a time of recession?  What should be cut?  What should be increased?  What does a serious budget look like, one that benefits the people and nation in the mid and long term?

If default takes place, it will be predicated on a conspicuous fraud, just like our example of the fraudulent default by the individual who had no need to default.

The debt ceiling and a balanced budget are entirely separate issues.

Anyone who behaves as though this is not the case is simply lying.  Worse, they're the enemy of the vast majority of citizens.

The graphic says it all. That's how I feel, our government is shooting at us with AK-47's economically, can't hit a moving target, thinking they are going to win the 2012 election while they sink the boat. They are scum!

The new version of "The Crazies" is actually the better of his two efforts. It pretty much sums up the problem. When the crazies run the show we are in dire need of help.

.... they are going to win in 2012, unless people begin to vote for candidates who announce in other than the two major parties. With the exceptions of Libertarian Party, Green Party and Socialist Party, the various alternative parties before and since Ross Perot's Reform Party have tended to be dysfunctional caricatures rather than actual political parties opposing both the major parties.

People should be forming a New Reform Party or a Tariff Party, but that isn't happening. The "Tea Party" was hugely successful tapping into the desire of the American people for a true populist choice, but the "Tea Party" -- originally formed at the grass roots by protectionists -- was co-opted as early as the beginning of 2009 by the RNC (that have never seen a fast-track 'free' trade agreement they didn't like).

It way past time for the American people to start putting representatives into the U.S. House from parties other than the tried-and-untrue Worse Party and Worser Party.

Suppose that neither major party could form a majority in the House, would that be bad for the economy, for jobs, for change? I think not.

Caught between the "good cop" and the "bad cop," facing either default or ever deeper hits to the U.S. economy and to the middle class, we may be looking at some form of military dictatorship within the next few years, perhaps as early as next month.

Paul Craig Roberts considers this to be a risk greater than the risk of increasing debt.

Recently I wrote an article pointing out that the Republicans had picked a bad time, when the world was already concerned about US financial credibility, to make an issue over the routine increase of the debt ceiling, thus creating an impasse that threatens default. The Republicans see in the debt ceiling issue an opportunity to cut social spending as the price of allowing an increase in the national debt.

One can't blame the Republicans for trying to do something about the growth of the public debt. However, there is a risk in the Republican's intransigency, and that risk is that, thanks to presidential directives put on the books by President Bush, President Obama has the authority to declare the prospect of default a national emergency. Obama can simply set aside the debt ceiling limit and seize the power of the purse from Congress. The transformation of the president into Caesar would take another large step forward.

I wrote that I regarded this risk to be greater than the risk of additional public debt.

I think that financial markets would probably welcome the news that Obama has invoked the PATRIOT Act to declare an emergency, and probably most Americans would like to see the current Congress sent packing. Certainly FOX addicts and Tea Partiers would be smugly satisfied to discuss within their own circle how right they have been all along about Obama's designs to become Ruler of Earth. It would then be a matter of Obama announcing that the debt ceiling has been removed, that he would not run again in 2012, and that he is capping the price of gas at something like $5/gallon.  It Obama doesn't take such action, the country could be electing a Republican in 2012 who is willing to declare the emergency that may very well be too obvious to deny by 2013.

but there have been so many things that I just couldn't believe happened in the last 3 years, who knows at this point.

If Obama doesn't do it, he may be setting himself and his vice-president up for impeachment, even if he wins in 2012. Now, let's see, after the president and the vice-president, who is in line for the White House?

When there is no compromise on default in a time of war, what can we suppose except that it is a struggle for absolute power, no holds barred.

the poor, Social Security and Medicare/Medicaid. This is a continuation of the attacks on the people taken to a new level with Bankruptcy Reform under Bush. Keep piling on debt, impoverish the people, make them sick, degrade them and blame them for what they're making you do.

If there is some partial reality to this drama by the Republicans,then Obama wins. He will play chicken more effectively and win without having to do cuts. He'll look like a hero for 2012, get the cuts down the road, and stomp all over the House for the net few months. (Recall how Obama and his people obliterated Trump, turned him into a laughing stock).

The very unlikely wild card is actual default. The financial elite fails to make the calls to their employees in the House or House members either don't get calls or fail to follow the instruction set. That puts Congress in the position of committing fraud. It can meet the obligations of the United States but willfully refuses. If Obama has a means to override them, it is his obligation to do so in order to prevent fraud by Congress.

Democracy has been distorted for a long time due to massive piles of cash dumped into campaigns, cronyism, a judiciary that ignores the law when it has to in order to reach its goals, wars based on lies, presidential directives to US citizens with the 'terra' label, etc. This very unlikely scenario would ruin everything for the storyline that has worked so well. There is too much to be lost of it ensues.

I'll take the first option, attack and beat down those with the least time on earth, least money, and least power.

At this point, Obama should announce that there will be no extension of the Bush tax cuts on his watch and that he will use his veto pen generously. With the prospect of lower taxes now and higher taxes later, maybe some of that cash will come out of the corporate treasuries, especially if there is a meaningful jobs credit.

That makes a lot of sense. At this point, I'd be happy to see him send Congress home and call for new elections;) Stop the wars, cold, repeal the Bush cuts. Bingo, we're in great shape. Thanks for making sense in short order!