Sales. The U.S. Census Bureau announced today that the combined value of distributive trade sales and manufacturers’ shipments for July, adjusted for seasonal and trading-day differences but not for price changes, was estimated at $978.4 billion, up 0.1 percent (±0.2%)* from June 2009 and down 17.8 percent (±0.4%) from July 2008.

Inventories/Sales Ratio. The total business inventories/sales ratio based on seasonally adjusted data at the end of July was 1.36. The July 2008 ratio was 1.27.

This is the longest inventory contraction since 2002.

The above tells you how long it would take, at current sales rates, to clear inventories. We have a slight down tick from 1.38 months to 1.36 months. Kind of flat line if you ask me.

I want to point to Paul Krugman's latest post on the Macro economic situation and "borrow" one of his charts, below. Seems Dr. Doom ain't crazy after all to worry about a "W" or double dip recession. Notice how Krugman shows how the increase in inventories contributed to GDP growth during 2001. 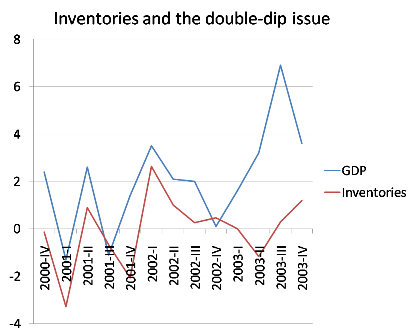 So, while the MSM claims manufacturing will see the increase in retail sales as a reason to increase output, as just noted, minus autos, retail sales increases really weren't so strong and it's possible we have an anomaly in the data due to cash for clunkers.

Hopefully this data will translate nationally.

The Empire Survey, which is a manufacturer's survey in New York State really popped up.

I don't have any correlation to this survey vs. national manufacturing stats so I decided to put it in a comment.

The Empire State Manufacturing Survey indicates that conditions for New York manufacturers improved in September, following the upturn first observed in August. The general business conditions index increased 7 points, to 18.9, its highest level since late 2007. The new orders index was positive and higher than last month, while the shipments index dipped. The prices paid index rose several points to its highest level in many months, and the prices received index, while negative, inched close to zero. The index for number of employees remained in negative territory, while the average workweek index moved above zero for the first time in a year. Future indexes remained relatively high and close to their August levels, suggesting that conditions are expected to improve further in the months ahead. Indeed, the future general business conditions index reached its highest level in several years.

This is assuredly a very good sign, although their employment numbers are still negative.

Ya just gotta love the blogs. I had said I didn't know if the Empire Survey correlated to statistical reality...

Well, ya gotta read this post where he went through the survey history and correlated it.