A miracle has occurred. Obama is actually listening to Volcker and proposes:

The president, for the first time, will throw his weight behind an approach long championed by Paul A. Volcker, former chairman of the Federal Reserve and an adviser to the Obama administration. The proposal will put limits on bank size and prohibit commercial banks from trading for their own accounts — known as proprietary trading.

The White House intends to work closely with the House and Senate to include these proposals in whatever bill dealing with financial regulation finally emerges from Congress. 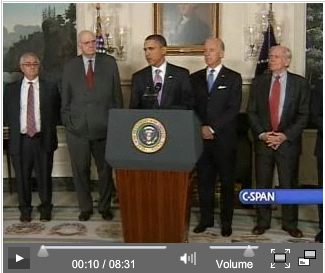 Too Big to Fail Means Too Big to Exist finally wins! Reinstating Glass-Steagall to separate out commercial banking from investment banking also seems to win!

Volcker Wins! This one turn around, a much needed turn around. Yippie! The New York Times story gets better:

Mr. Volcker flew to Washington for the announcement on Thursday. His chief goal has been to prohibit proprietary trading of financial securities, including mortgage-backed securities, by commercial banks using deposits in their commercial banking sectors. Big losses in the trading of those securities precipitated the credit crisis in 2008 and the federal bailout.

The president will speak at an appearance on Thursday at the White House with Treasury Secretary Timothy F. Geithner, an administration official said, speaking on the condition of anonymity because the talks were private. It will come after a meeting with Mr. Volcker.

This post will be updated as documents and video becomes available!

the President will continue to work closely with Chairman Dodd and others to craft a strong, comprehensive financial reform bill that puts in place common sense rules of the road and robust safeguards for the benefit of consumers, closes loopholes, and ends the mentality of “Too Big to Fail.” Chairman Barney Frank’s financial reform legislation, which passed the House in December, laid the groundwork for this policy by authorizing regulators to restrict or prohibit large firms from engaging in excessively risky activities.

We know Barney Frank's bill is full of exemptions, loopholes and is literally swiss cheese one can drive a truck through on derivatives. So, does Obama means somehow Frank's House Financial reform legislation actually does anything? I think not! Here are the bullets from the press release:

Now that a few details are emerging, it's unclear if the intent is to break up commercial banking from investment banking (reinstate Glass-Steagall) 100% or plain break up large financial institutions. This will obviously create a war with Wall Street and Financial Institutions so, starting out with a vague press release as an opening salvo might not be the great sign.

The Wall Street Journal gives a good explanation on what this means:

Under the proposed rule, commercial banks would be prohibited from owning, investing in or advising hedge funds or private-equity firms. Bank regulators would not be simply given the discretion to enforce such rules. They would be required to do so.

"You can choose to engage in proprietary trading, or you can own a bank, but you can't do both," the official said.

More interesting, currently there is a rule which each financial institution can only have 10% of total FDIC insured deposits. That rule would be changed and this truly implies a break up of the Zombie banks might occur.

Administration officials said they also want to toughen an existing cap on bank market share. Since 1994, no bank can have more than 10% of the nation's insured deposits. The Obama administration wants that cap to include non-insured deposits and other assets. The White House released no information on what those other assets might be, saying officials would work closely with Congress to set tougher caps designed to prevent the further concentration of financial industry markets within a few behemoths.

The rest of the article is more rhetoric. Glass-Steagall by any other name is still Glass-Steagall and it does seem Volcker's firewall between commercial and investment banking is being constructed.

What is not discussed, as usual, are derivatives, which are a key reason for the Financial implosion of 2008.

House Financial Services Committee chair Barney Frank wants these reforms implemented over a 3-5 year time window and not done all at once to avoid an asset fire sale. Ya know Frank just seems to do whatever he wishes and it would be nice one day if the administration and the head of the House Finance Committee got their messaging in sync before just rambling on CNBC and giving divergent opinions to those talking heads who are in bogus panic commentary mode.

CNBC of course attributed the market tank to the Obama announcement, almost egging it on all day. I guess China's overheated economy and reigning in of lending had nothing to do with it or maybe the market was plain due for a correction.

Its about time Volcker got some love from Obama.

We know this by now. It's one thing to propose something and totally another to actually fight for what you propose. Remember the first crack at financial regulatory reform. Once, the House got a hold of that it was rendered useless with its exemptions and loopholes.

Let's see how hard Obama fights for this.

This could be noise but IMO is just another reason to get rid of Geither (via Reuters):

Geithner is concerned that the proposed limits on big banks' trading and size could impact U.S. firms' global competitiveness, the sources said, speaking anonymously because Geithner has not spoken publicly about his reservations.

He also has concerns that the limits do not necessarily get at the heart of the problems and excesses that fueled the recent financial meltdown, the sources said.

from Obama, i.e. dump Geithner and put Volcker in as U.S. Treasury secretary. I almost posted the pre-announcement speculation but held off and waited. Glad I did since no such luck.

I would love to have him suddenly become Bernankes quasi boss.

It would also take a squirrely conservative view away from social issues.

He would jump on this I would think because of the damage he could do.

I would imagine this is the stuff of Bernanke's personal nightmares! God, where are the skit writers and I hope they are reading this site. What a scream concept, although I do believe the "U.S. doesn't torture".

The government shouts reform everyday. The only meddling the government should do in private business is upholding contracts. The millions of pages put out by congress is impossible to be effective or reasonable. We are a free people!