The BLS released the Metropolitan unemployment for October 2009 today. 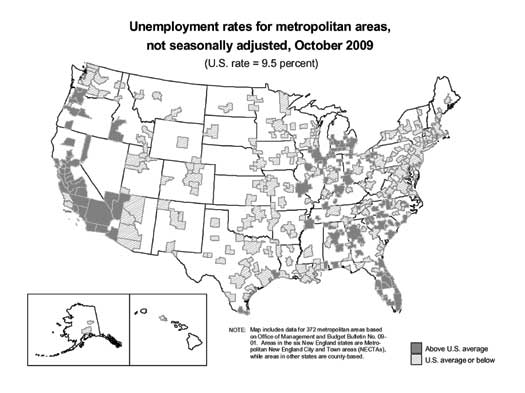 In October, 124 metropolitan areas reported jobless rates of at least 10.0 percent, up from 13 areas a year earlier, while 75 areas posted rates below 7.0 percent, down from 280 areas in October 2008.

El Centro, Calif., and neighboring Yuma, Ariz., continued to record the highest unemployment rates, 30.0 and 23.5 percent, respectively. Among the 15 areas with jobless rates of at least 15.0 percent, 9 were located in California and 3 were in Michigan. Bismarck, N.D., registered the lowest unemployment rate in October, 2.8 percent, followed by Fargo, N.D.-Minn., and Grand Forks, N.D.-Minn., 3.5 percent each.

Overall, 138 areas recorded unemployment rates above the U.S. figure of 9.5 percent, 229 areas reported rates below it, and 5 areas had the same rate.

The Metro report is not seasonally adjusted, which is why the BLS compares yearly numbers, for over the course of a year the seasonal and non-seasonal adjustment figures should converge.

So, when looking at the month to month changes, take note these are raw figures, not seasonally adjusted.

On the September to October change, one must read the tables in the report.

It looks like the Associated Press did some of the tables tally for the Sept. to Oct. change:

The jobless rate rose in 162 of the 372 metro areas tracked by the Labor Department. The rate was unchanged in 42 areas. It dropped in 168 areas.

In September, unemployment had improved in 223 areas and worsened in only 123.

California and Michigan have been hit hard with 9 CA areas above 15% and 3 in Michigan.

One might note from the map that the Southwest has unbelievably high unemployment rates. The explanation is these areas have many seasonal agriculture workers. hmmm. Strange since North Dakota has many farms and wheat with the lowest unemployment rate in the nation.

El Centro, Calif., and Yuma, Ariz. posted the nation's highest jobless rates of 30 and 23.5 percent, respectively. The two adjacent counties are heavily agricultural and have many seasonal farm workers.

Bismarck, N.D., recorded the nation's lowest rate, at 2.8 percent, followed by Fargo and Grand Forks, N.D., both at 3.5 percent.

Taxing Wall Street to Fund Jobs and Recovery on Main Street - 13448 reads
California is officially flat broke - 96228 reads
Safeway Skewered for Throwing 6,000 Workers Under the Bus in Video Parody - 334627 reads
The de-industrialization of the U.S. - 56882 reads
Will the NY Attorney General Bring Doomsday Charges Against Wall Street? If So, How Long Will He Survive? - 1152269 reads
The Panic of 2008: a turning point - 83383 reads
Gustav Eying Gulf Oil and the LOOP - 26631 reads
Tax Cuts for the Rich Do Not Generate Jobs - 245021 reads
China's Currency Manipulation Makes America See Red - 26508 reads
China and India Really Are Cheap Labor in Manufacturing - 100131 reads