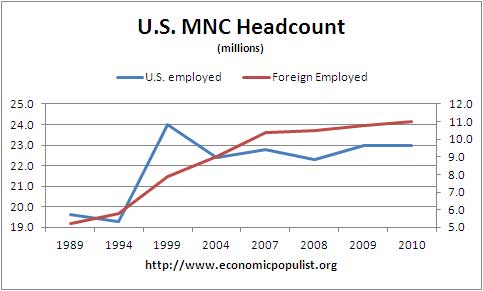 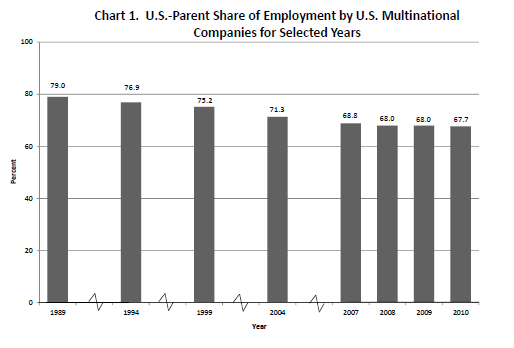 Think foreign corporations operating in the United States are taking up the hiring slack? Nope, they dropped their U.S. employment by 1% in 2010.

Investment, or capital expenditures are also increasing by higher percentages abroad than in the United States for these multinational corporations:

Capital expenditures are funds used to build new facilities, plants, growth for future production. They are disproportionately foreign, by sales volume, as shown in the below percentage change.

Some will claim the reason for growth abroad is local sales. That U.S. multinationals are expanding in foreign markets. While part of that is true, look at the below sales chart for U.S. multinationals abroad and domestic. If sales were the driving force in U.S. headcount reduction why did hiring increase when foreign sales cliff dove in 2008-2009? 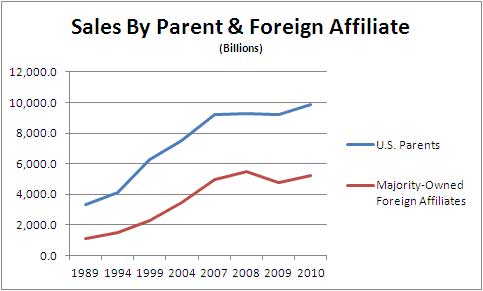 Sales by foreign affiliates majority owned by U.S. MNCs dropped -13.1% in 2008-2009, yet employment abroad increased by 3.3%, where in the United States headcount increased 3.1%. During the same period, U.S. parent sales only declined -0.6%. If offshore outsourcing as a culprit is denied from these statistics, well, I think we need a new set of economists analyzing this data.

The future looks bleak too. IBM is projected to slash their American workforce by 78% by 2015. India's BPO industry just hit the $100 billion a year mark. Now the Philippines is hitting $25 billion a year by 2016 by the business of offering cheap labor. In other words, the race to the bottom continues unabated.

The US will have to have a stagnant or declining wages for decades before we can compete with these over seas labor pools.

China has finally started to let the renminbi float just a little. They had to start somewhere. Walmart will have to adjust prices and maybe as our wages come down and theirs go up more manufacturing will return to the US. Chinese companies have made some forays into South Carolina fairly recently. There is hope.

I had to link to a Google cache of the article which for some reason had been taken down.

I didn't even write it up because I view that minor increase as politics before the G20, IMF/World Bank meetings that happened this week in D.C. On the "return of manufacturing", the real reason manufacturing has grown in the last year is they had such major blood letting, it makes their new employment look higher, but one needs to take it into account all the way back to 2008.

I am fairly certain offshore outsourcing does not pay in many cases, i.e. the U.S. is competitive, when one takes into account all factors, such as global supply chain, time window...

although on global supply chain it's so bad, to manufacture in the U.S., you're gonna wait forever on parts because they are all....manufactured in China now.

Yeah, who can forget HP. Similar to IBM, just watching the complete destruction of a once great tech giant.

That just blows my mind.

I cringe whenever I hear that Indian accent when calling customer service for a couple of things I use.

No resolution is a real negative. It has to hurt more than they save because they lose customers that way.

True story. The Westin Hotel in Boston sometime in the late 70's bought a PBX from Okidata. Okidata made just 13 of them and dropped out of that market. Any time a part failed the part had to be manufactured in Japan and shipped overnight to Boston. Needless to say the parts costs 100s of times more than they should have.