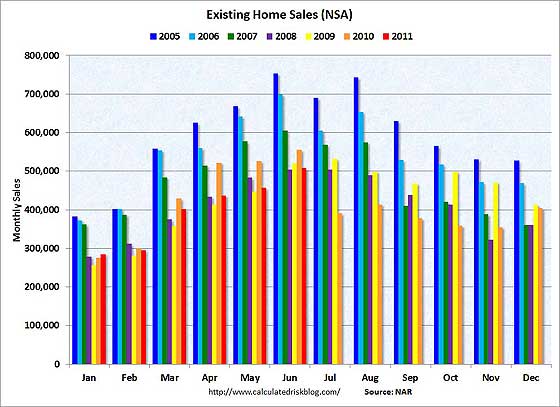 Lawrence Yun, NAR chief economist, said this is an uneven recovery. “Home sales had been trending up without a tax stimulus, but a variety of issues are weighing on the market including an unusual spike in contract cancellations in the past month,” he said. “The underlying reason for elevated cancellations is unclear, but with problems including tight credit and low appraisals, 16 percent of NAR members report a sales contract was cancelled in June, up from 4 percent in May, which stands out in contrast with the pattern over the past year.”

Yun cited other factors in the sales performance. “Pending home sales were down in April but up in May, so we may be seeing some of that mix in closed sales for June. However, economic uncertainty and the federal budget debacle may be causing hesitation among some consumers or lenders

Right. This month we have a new blame, contract cancellations, due to jumbo loans being limited. It seems the NAR loves to blame the depressed housing market on anything but the erosion of working America and an over-inflated bubble. Usually the NAR blames the expired home buyer tax credit, or tightening mortgage standards. This month has two new components to the blame game, the debt ceiling political theater and contract cancellations. Magically the NAR do not seem to mention how people are out of money, they lost their jobs, the future is bleak, retirements also wiped out or the fact home prices are still way out of whack to median wages and salaries in the United States. Literally the NAR will claim homes are extremely affordable, with the median price for all housing types being $184,300 and up 0.8% from last month. The median wage in the United States? About $23/hr.

Distressed homes sales were 30% of all sales. These are short sales, foreclosures . NAR reports investors are most of these cash sales, now at 29% of all existing home sales. The NAR typical discount claimed is 20% for distressed sales.

First time home buyers were only 31% of all home sales.

The balance of sales was to repeat buyers, which were a 50 percent market share in June, up from 45 percent in May, which appears to be a normal seasonal gain.

Housing inventory increased to a 9.5 month supply and is up 3.3% for the month. For the year, existing inventory is down 3.1% as reported by Calculated Risk, the best blog out there for original, independent, detailed, real estate graphs, data and analysis when it comes to housing data.

the NAR with their never ending excuses for why a gigantic housing bubble built on the stilts of a fictional derivatives gambling casino, using suckered Americans thinking their appraisals would just keep increasing for infinity.., gee wiz, why did that mess collapse [sic].... drives me crazy.

Hello, when one takes away a major gambling chip of Wall Street, does one really expect that sector to take off when the middle class is being shuttered off to poverty land?

Anyway, Calculated Risk really pays attention and analyzes all of the data. On housing, I am not doing too much original number crunching.

Angry Bear has a nice post over viewing Zillow's estimates of how home sellings overprice their homes by 12-14% above real market value.

Wishful thinking. I know where I am, I see the same homes, over and over, being pushed by realtors, some ongoing for 2 years now...

as the foreclosure maps mushrooms, yet the banks are holding onto most of those properties, not putting them out on the market.

It's so delusional with local real estate agents refusing to realize their cash cow has left the farm.

"I know where I am, I see the same homes, over and over, being pushed by realtors, some ongoing for 2 years now... " --- Robert Oaks

Yes. I see the same thing. I know of places that could have sold for cash two years ago, but the seller (bank) preferred to accept a down pending financing, and then the financing apparently fell through. And then that cycled around again, maybe after six months and then some more to wait out the winter!

There has been some actual movement this year, with folks moving in to stay -- residences that were vacant for some time -- but it doesn't add up to a market.

Thanks for link to Angry Bear story on Zillow, which asks what should Zillow do? I don't think Zillow should do anything to 'correct' their system, just steady out. People understand Zillow for what it is, very useful in general, but this is a buyer's market (to say the least).

The thing is, if you're selling, you really always need just that one motivated buyer. Which means that you have to make that one buyer happy. No use pretending otherwise.

Banks and realty agents definitely do seem to be in a delusional dance.

Brokers and agents are hurting but sometimes can make insider deals to keep going.

Banks? They just can't stand marking to market, it's too much of a loss, so they do what they can to rig the market.