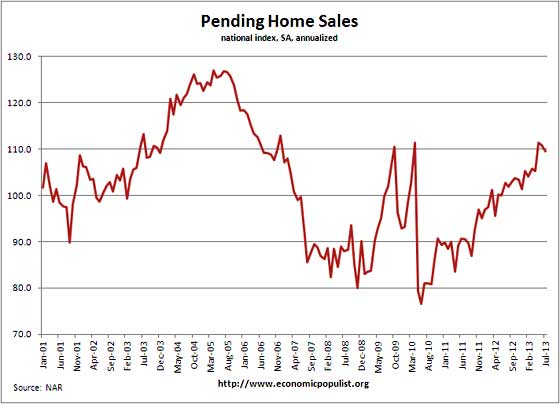 The above graph shows pending home sales are showing a monthly decline after an incredible run up.  May's PHS increased by 5.8% for example.  Pending home sales have still increased annually for last 27 months in a row, so this appears not to be a plunge, but a potential leveling off of the dramatic monthly increases.

Here are the regional pending home sales from the NAR report:

Another factor in residential real estate declines are mortgage interest rates.  Mortgages just jumped to a 2013 record high, 4.8%.  This is a full one percentage point increase in mortgage rates since May.  Applications just dropped -2.5% in the week of August 23rd and the week previous saw mortgage applications declining by -4.6%.  Refinancing one's home has also declined:

Higher rates have dissuaded borrowers from refinancing existing home loans. The refinance index fell 5.4 percent last week, and the refinance share of total mortgage activity slid to 60 percent, the lowest since April of 2011.

The NAR also released their projections for this year and 2014.  Clearly they are seeing levels maintaining but not increasing much further and the spike in prices to moderate.

NAR projects existing-home sales to increase 10 percent for all of 2013, totaling about 5.1 million, and reach approximately 5.2 million next year. With ongoing supply imbalances, the national median existing-home price is expected to grow nearly 11 percent this year, and moderate to a gain of 5 to 6 percent in 2014, with rising construction taking some of the pressure off of home prices.

Michael Bloomberg Possible Run for President Would Gut Social Security - 24817 reads
Safeway Skewered for Throwing 6,000 Workers Under the Bus in Video Parody - 326804 reads
The Cost of Left-Wing hate - 112837 reads
Will the NY Attorney General Bring Doomsday Charges Against Wall Street? If So, How Long Will He Survive? - 1148721 reads
Forces Behind the Egyptian Revolution - 62180 reads
The war on the middle class - 210337 reads
The de-industrialization of the U.S. - 46768 reads
Wages versus gold: A look at historical data - 28446 reads
Employee Abuse Runs Rampant In America - 67152 reads
California is officially flat broke - 92118 reads