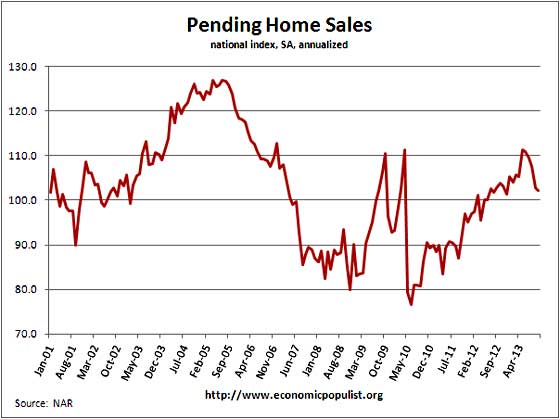 The above graph shows pending home sales are showing a consistent monthly decline after an incredible run up.  It looks like the party is over for increased pending sales.  The NAR notes the IRS was closed for October so income verification was backlogged and held up some sales.  Still it is clear there is a downtrend as prices are again out of reach for middle America with repressed wages and not enough jobs.  From the NAR:

The government shutdown in the first half of last month sidelined some potential buyers. In a survey, 17 percent of Realtors® reported delays in October, mostly from waiting for IRS income verification for mortgage approval

We could rebound a bit from this level, but still face the headwinds of limited inventory and falling affordability conditions. Job creation and a slight dialing down from current stringent mortgage underwriting standards going into 2014 can help offset the headwind factors.

The west coast has seen a massive run up in home prices that are completely out of whack with income levels in the areas.  It should be no surprise that the run up imploded as shown below in the NAR regional pending home sales figures:

The Case-Shiller home price index still shows bubble like annual price gains and in California especially with their high unemployment rate one must wonder who is buying up any home.  Another factor in residential real estate are mortgage interest rates.  Mortgages have increased to now 4.22%, up from a May low of 3.35%.

There are also a host of new mortgage rules coming in 2014.  The FHA added more fees and lenders must now verify a host of credit elements before approving a loan.

Lenders must now verify and document at least eight specific criteria, including income, assets, credit history, other debt obligations, and employment status, to determine whether a borrower has a reasonable chance of repaying the loan. If the lender doesn’t do all that, a homeowner who has trouble repaying the loan has grounds for a lawsuit.