Total retail sales are $400.6 billion for November. While electronics and appliances plunged -3.9% from last month, it's not the real driver of consumer spending, autos are. 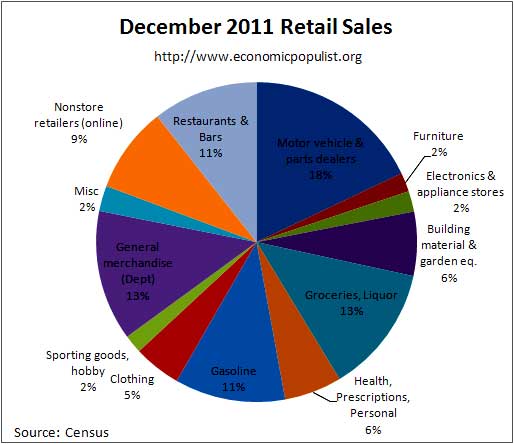 The above chart breaks down seasonally adjusted retail sales by percentage of total December sales. As we can see, electronics are only 2.1%. Computer and software store sales (which includes smartphones), are only 22% of the total store sales for the electronics & appliances category. There is a lot of hype surrounding smart phones, but sorry, smart phones do not save the economy. Below is a bar chart breaking down net sales revenues reported by surveyed stores (retail outlets). 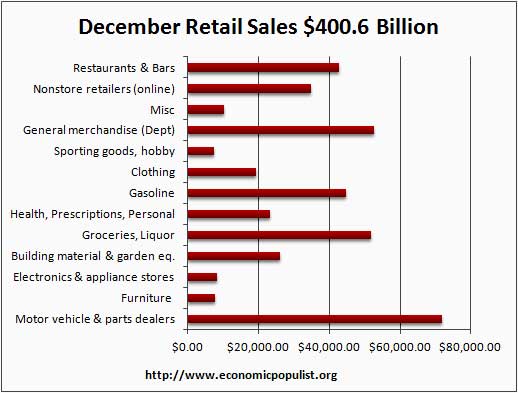 Retail sales are not adjusted for price increases, not reported in real dollars. Real Economic growth adjusts for inflation. Retail sales has variance, margins of error, and is often revised as more raw data comes into the U.S. Department of Commerce (Census division). For example, this report has an error margin of ±0.5%. Data is reported via surveys, and is net revenues of retail stores, outlets. Online retail net revenues are asked in a separate survey of large retail companies (big box marts). This is also the advanced report. To keep the gains in perspective, below is the graph of monthly percentage changes since 2008. Gas sales decreased -1.6% from November but are still up +8.9% in comparison to December 2010. Grocery retail sales decreased -0.2% for the month and are up +4.7% from this time last year. Hard to believe with Holiday meal shopping, but there ya have it. Volume does come into play here if it increases greater than the price decreases in aggregate reported data from retailers.

As we can see, in spite of the many claims we had record holiday sales, the results are not materializing in the retail sales reported figures. One reason could be retailers gave such discounts while their volume increased their overall sales by gross receipts did not. Another possibility is retailers, in masse, have not turned in their surveys to the Commerce department, but this is highly unlikely.

Retail sales correlates to personal consumption, which is about 70% of GDP growth. Yet GDP has inflation removed from it's numbers. This is why Wall Street jumps on these retail sales figures. Lord help them if America stops shoppin'. Half of America is poor and poverty rates are as high as 1993. Overall, wages were flat. Increases in real disposable personal income are usually low or declining. In other words, where people are getting the cash to go shoppin' appears to be on credit, or going into more debt. We calculated out holiday sales percentage increase from last year and also came up with 4.05%.

Different groups calculate out holiday sales differently and NRF include online sales, which we believe is more valid. This article gives a history on The National Retail Federation's numbers and definitions.

Regardless, anyone claiming this year was a record blow out, well, we've looked high and low and all we find are lumps of coal in the actual reports.

To wit, below is the graph, only going to November 2011 of retail sales in real dollars, or adjusted for inflation. We can see it's no record, we are not even back to pre-recession levels in real dollars. The highest in a decade headline many in the press are reporting is annual retail sales percent change growth, but not adjusted for inflation. Yippie, prices increased on food and gas. Seriously, we don't find that number anything to write home about. Not to be deprived of eye candy, below is the graph of of annual retail sales percentage change, not adjusted for inflation.