COOL stands for country of origin labeling and no surprise, trying to avoid toxic meat or seafood, or even support your local economy through consumer action is now a barrier to trade according to the WTO. Trade Reform is on fire over this latest WTO outrage:

Today, a panel of three foreign diplomats seated by the United Nation’s World Trade Organization (WTO) issued a decision regarding complaints filed against the United States’ country-of-origin labeling (COOL) law that informs U.S. consumers as to the origins of their food. The panel consists of a diplomat from Pakistan – the country that harbored the world’s most dangerous terrorist, Osama Bin Laden; a diplomat from Switzerland; and, a diplomat who is a former WTO employee.

Agribusiness Has Right to Make Sure You Don't Know

Public Citizen goes into more detail on how consumers are denied information on what exactly they are eating by the WTO. 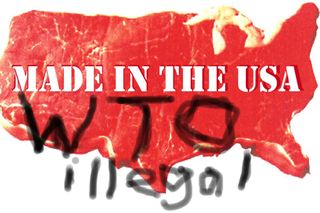 These rulings confirm the worst fears of members of Congress and advocacy organizations, who warned Beef wtoof the dangers of expanding the scope of trade agreements beyond border tariffs into the domestic policy arena. This expansion was pushed by anti-regulation corporations, with substantial assistance from “free-market" ideologues who saw the WTO as a delivery mechanism for light-to-no touch regulation.

Yet Another Appropriations Bill Being Stuffed with Anti-Worker Amendments

In funding Labor-HHS of course we have more disastrous amendments being added:

Representative Denny Rehberg (R-MT), Chairman of the Labor-HHS-Education Appropriations Subcommittee, recently launched a massive attack on the federal government’s efforts to improve the labor standards, job prospects, wages and bargaining rights of American workers. His numerous amendments to a major bill to fund the Labor Department and other agencies would block the government’s efforts to improve enforcement of wage laws, make construction work safer, protect the jobs of U.S. workers, reduce the levels of respirable coal dust that causes black lung disease, and give workers a fair chance to have a union if they want one. And where the law is already working to ensure contractors don’t compete for federal construction projects by driving down wages, Rehberg’s amendments would undermine the existing law.

the bill undoes recent rule changes from the Labor Department in the H-2A and H-2B programs that favor the hiring of U.S. workers at prevailing wages over foreign guestworkers for relatively low-skilled jobs as farmworkers, hotel maids, and landscapers. The bill would thus make it harder for U.S. workers to find jobs and would depress wages.

All in the name of homeland $ecurity. We have EU Banning scanners, but not the United States.

Just in time to make you feel better about your holiday travels: full-body airport security scanners that use X-ray technologies are acknowledged to cause cancer. No problem in the US; but now they’re banned in the EU. The European Commission, the executive body of the European Union, adopted new rules about security scanners at European airports. And at the very bottom of the press release that discusses all sorts of issues is this: "In order not to risk jeopardising citizens' health and safety, only security scanners which do not use X-ray technology are added to the list of authorised methods for passenger screening at EU airports. All other technologies, such as that used for mobiles phones and others, can be used provided that they comply with EU security standards."

David Cay Johnston has a great idea, call a spade and spade and note Wall Street is gambling. Then, recall the law where gambling debts in the United States were not enforceable.

Not so long ago — before casinos, currency and commodities speculation, and credit default swaps became big business — U.S. courts would not enforce gambling debts. Restoring this principle offers a simple way to shrink the rampant speculation in derivatives that was central to the 2008 meltdown on Wall Street.

You might have been wondering what that Obama rhetoric on China was all about, since we know this administration will not label China a currency manipulator. Seems Romney is making a China crackdown a key policy element of his campaign.

Former Massachusetts Gov. Mitt Romney is dead serious about labeling China a currency manipulator and putting new tariffs on Chinese imports, sources close to Romney tell POLITICO. Some have suggested that Romney’s stand against China is merely campaign posturing that would soften if Romney were to be elected President and consider the implications of his proposals.

Since Buddy Roemer is getting a complete media blackout, he's considering a 3rd party run for President:

As his path to the Republican nomination for president looks increasingly impossible, former Louisiana Governor Buddy Roemer’s campaign is starting to mull a third-party run. Last week, Roemer campaign manager Carlos Sierra told The Daily Caller that while he had been exploring other possible options for his candidate, Roemer himself was still focused on the Republican primary. But on Wednesday Sierra suggested that Roemer is aware of his actions and was beginning to consider the idea. “The whole South Carolina and Florida thing — it’s definitely getting him thinking a little more about other options,” Sierra said. Roemer will not be included on Republican primary ballots in Florida and South Carolina. One decision was made by the chairman of the Republican Party of Florida. When Roemer’s campaign declined to pay the necessary filing fee in South Carolina, the second was made for him.

Look at that, the GOP are even keeping him off of the primary ballot.

McDonald's is no longer accepting eggs from one of its major suppliers, Sparboe Farms, after a graphic video showing the hellish conditions inside three Midwestern facilities surfaced.

Radiation? That's a problem for the Food Supply?

This Japanese newspaper, in English, is showing how widespread radiation is from Fukushima. They are running a series of articles.

More than 3 millisieverts of radiation has been measured in the urine of 15 Fukushima residents of the village of Iitate and the town of Kawamata, confirming internal radiation exposure, it was learned Sunday.

Both are about 30 to 40 km from the Fukushima No. 1 power plant, which has been releasing radioactive material into the environment since the week of March 11, when the quake and tsunami caused core meltdowns.

"This won't be a problem if they don't eat vegetables or other products that are contaminated,"

This round-up is a lot more optimistic than the "Ridiculous Statistics At A Glance"! Not saying much, but it's something ... like about Romney and also about Buddy Roemer. If there was ever a case of "I didn't leave the Republican Party, they left me," it's Buddy Roemer. I may write him in, regardless of party, no matter what.

You gotta hand it to David Cay Johnston. I have often advocated for treating Wall Street's gambling as gambling for IRS purposes, but I never thought about gambling debts being unenforceable in US law. That's pure genius. I'll expect that to happen about when prosecutors start to apply RICO to properties where repeated violations of immigration and labor law occur.