Brought to you by The Fiscal Cliff - Manufacturing artificial crises one at a time to rob you blind.

Good Morning! Rise and Shine! Get that Cup O' Joe...
break out the O.J....hang out with the pooch...time to check out the debate funnies.

This just in. Newly unemployed woman enjoys income equality for the first time. 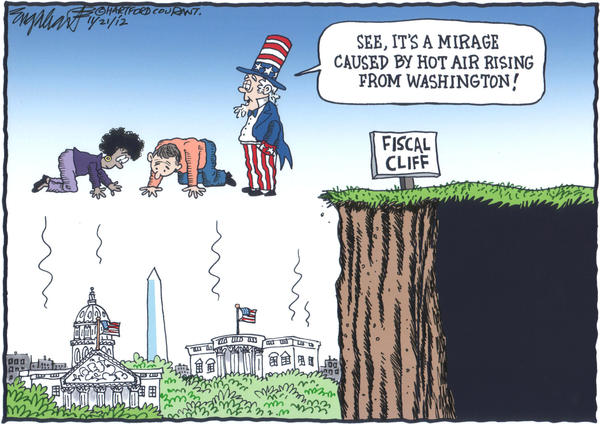 This is Not a Test

BP CEO comments on the $4.5 billion settlement for the gulf oil spill disaster.

After his company agreed to plead guilty to 14 criminal charges in connection with the Deep Horizon accident and oil spill, BP chief executive Bob Dudley released an official statement Thursday expressing his “profound and heartfelt remorse” over the loss of $4.5 billion in fines. “All of us at BP deeply regret any negligence on our part that may have led to this tragic oil spill and the tremendous damage it has inflicted upon our profitability,” Dudley said of the disaster that may eventually cost his company more than $40 billion in settlements and penalties. “We never intended to upset the incredibly delicate balance of our finances, and efforts to restore the billions of dollars lost in this unspeakable catastrophe will continue until we ensure ensure just compensation for every last shareholder.” Reached for further comment, Dudley told reporters that while he feels “tremendous sorrow over losing $4.5 billion,” he’s just thankful it only amounts to 1 percent of the company’s gross revenue for 2011.

Following Friday’s announcement that Hostess Brands was shuttering its facilities and ceasing operations, laid-off employee Howard Brock told reporters he was now in the difficult position of finding creme-injection work with another company. “The economy is tough right now, so I hope I can find another job filling cake interiors with creme,” said Brock, a veteran creme injector with more than 15 years experience injecting chocolate, vanilla, and peanut butter cremes for Hostess. “I’ve also done some unskilled work as a frosting layer, coconut duster, and icing squiggler, but I hope it never comes to that. Luckily for me, no matter how bad the economy gets, companies are always going to need people who know how to inject food products with rich creme centers.” At press time, Brock had reportedly opted for freelance creme-injecting work until he could find a more permanent position.