In the above testimony, all of the economic metrics rattled off by Bernanke are basically correct. The commodities debate on derivatives versus physical supply versus exchange rates versus QE2 is still raging. When CPI is released on February 19th, we will make a point to break down components in graphic gory detail, including details on food and energy.

The real issue is this never ending claim that quantitative easing saves or creates jobs:

Bernanke was even asked how many jobs quantitative easing had produced.
...
Bernanke responded that all of the quantitative easing programs, including QE1, reinvestments, and QE2, had created approximately 3 million jobs. Grilled even further, Bernanke denied that one could put a number to it, only to then admit that “simulation studies” showed that QE2 specifically created approximately 600,000 jobs.

Really? Perhaps, there is just a wee tad bit wrong with these theoretical simulations on jobs.

Remember how the Stimulus added 3.7 million jobs? Gez, with all of these theoretical jobs around, maybe we can theoretically eat and theoretically pay our bills now.

The stimulative theory of quantitative easing is indirect credit creation in order to boost the economy. Banks won't increase lending. This is a method to indirectly simulate increased credit availability.

Turning now to the macroeconomic effects of the Federal Reserve's securities purchases, there are several distinct channels through which these purchases tend to influence aggregate demand, including a reduced cost of credit to consumers and businesses, a rise in asset prices that boosts household wealth and spending, and a moderate change in the foreign exchange value of the dollar that provides support to net exports. The quantitative magnitude of these effects can be gauged using a macroeconometric model such as FRB/US--one of the models developed and maintained by Board staff and used routinely in simulations of alternative economic scenarios.

An asset price is the cash equivalent price of some tangible asset, such as stocks, bonds, real estate and so on. The Federal Reserve is directly stating quantitative easing helps increase those asset prices.

Here are the simulation results details of QE2 as mentioned in Bernanke's testimony:

This trajectory of securities holdings causes the 10-year Treasury yield to decline initially about 1/4 percentage point and then gradually return toward baseline over subsequent years. That path of longer-term Treasury yields leads to a significant pickup in real gross domestic product (GDP) growth relative to baseline and generates an increase in nonfarm payroll employment that amounts to roughly 700,000 jobs. It should also be noted that this exercise is performed as a deterministic simulation and hence does not capture the potential benefits of the asset purchase program in mitigating downside risks to economic activity and inflation.

Note, quantitative easing does not directly inflate GDP. Real GDP, which is the number reported, has had inflation removed. More it is the increased credit affects which increase the other components of GDP as well as the decrease in imports. Imports decrease, exports can increase, because QE2 has a slight effect on international exchange rates. We saw these results in the Q4 GDP advance report.

That said, such activity, QE, does affect nominal GDP, which is not adjusted for inflation, but that is not the stimulative claims, as summarized, for boosting real GDP 3% for the second half of 2012:

The model projects that lower long-term interest rates produce higher stock market valuations and a modestly lower foreign exchange value of the dollar. These changes in financial conditions provide considerable stimulus to real economic activity over time. The full program raises the level of real GDP almost 3% by the second half of 2012. In turn, this boost to real output makes labor market conditions noticeably better than they would have been without large-scale asset purchases, benefits that are predicted to grow further over time. By 2012, the full program's incremental contribution is estimated to be 3 million jobs, with an additional 700,000 jobs generated just by the most recent phase of the program. Increased hiring lowers the unemployment rate by 1½ percentage points compared with what it would have been absent the Fed's asset purchases, as shown in Figure 3. 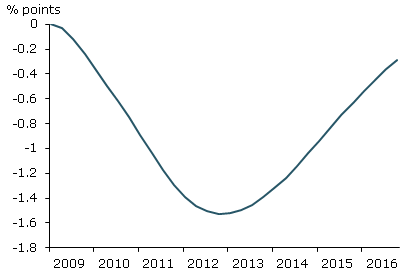 Yeah, but where are these 3 million jobs, these 700,000 jobs, these theoretical jobs? The above speech does at least lay the blame where it belongs, weak labor demand instead of that typical crud which tries to imply Americans are somehow fat, lazy, stupid, unskilled and so on, or so called structural unemployment. Still, where are the jobs, China and India perhaps?

Let's see, the stimulus created 3.7 million theoretical jobs and QE2 will create 3 million theoretical jobs. Yet, the United States is down 7.7 million jobs since January 2008 with a good 12 million needed right now, due to population growth (or as Bernanke put it, new entrants into the work force), to get back to pre-recession unemployment levels. We have 6.7 million theoretical jobs and not an opening in sight, only 3.06 million job openings in December 2010. Below is Calculated Risk's infamous unemployment comparison to pass recessions graph. Assuredly this comparison shows, maybe, just maybe, there is something broken with real GDP and it's relationship, or multiplier effects on job creation. 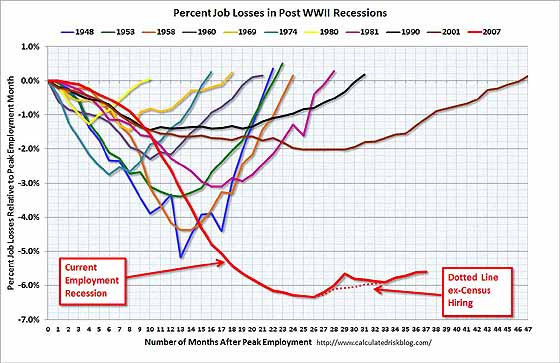 With that, where are the damn jobs? Just like Stimulus , these simulations rely on economic multipliers, which are correlations of job growth to real GDP growth. Obviously something is wrong to be down 12 million jobs since the start of this recession. There is clearly a breakdown in these relationships, an offshore outsourcing coefficient here, a labor arbitrage constant there. Something is wrong. While GDP has been sluggish, it assuredly has not had the drop like the Great Depression. Without these so called mythical jobs various programs, like QE2, have claimed to create, if true, we assuredly would have depression era unemployment rates. (Brother, can you spare a variable on intermediate goods & services traded globally over the Internet? I don't think it's a dime)

Is it the multipliers, or is it the details of the programs themselves?

Regardless, theoretical models will probably not be fixed real soon, especially due to the many political coefficients that are possible.

Instead of continuing to use these multipliers and indirect stimulus on the premise of job creation, how about something a little more focused and direct?

How about a direct jobs program, funded and managed by the government. No 3rd parties taking large contract awards, simple little paychecks handed out to regular workers, like the WPA or CCC did?

How about at least stop offshore outsourcing Local, State and Federal Jobs? In all of the discussion of innovation, R&D credits, how about tying that R&D credit with jobs in the United States, with workers possessing U.S. citizenship?

How about finally ending the great denial on the effects of immigration on increased labor supply, wages, and workers?

Finally, how about revamping the actual multiplier models? Politics and philosophies be damned, data rules. Something has clearly disconnected!

We'll see by the end of 2012 what's really going on here, perhaps. Of inerest is QE2's effect on imports and what that does to the U.S. jobs market, manufacturing jobs. Stay tuned and while you're waiting (and starving) for real job growth results, here is an entertaining tale of Bernanke & the Tooth Fairy.

Anyone having reference to research on improving multipliers and simulations for macro economic policy changes, please give a link or a reference. I've found quite a bit of discussion but no real concrete advance in terms of multipliers and modeling.

Maybe this is what you're looking for, but not sure. http://fairmodel.econ.yale.edu/wrkbook/index.htm

Looking for historical correlations, variances, adding additional variables, based on a historical series, and does that addition account for the divergence for 2008-2010 and so on. Assuredly not looking for constants with ratios, enough of those wet thumbs in the air methods.

With REAL unemployment and underemployment so high, GDP is in the toilet, and the high number on the DOW is fantasyland.