Job insecurity, together with declines in home values and tight credit, is likely to limit gains in consumer spending. The possibility that the recent stabilization in household spending will prove transient is an important downside risk to the outlook.
In conjunction with the June FOMC meeting, Board members and Reserve Bank presidents prepared economic projections covering the years 2009 through 2011. FOMC participants generally expect that, after declining in the first half of this year, output will increase slightly over the remainder of 2009. The recovery is expected to be gradual in 2010, with some acceleration in activity in 2011. Although the unemployment rate is projected to peak at the end of this year, the projected declines in 2010 and 2011 would still leave unemployment well above FOMC participants’ views of the longer-run sustainable rate.

Next is the written testimony trying to claim a GAO audit of the Federal Reserve would expose sensitive monetary areas, and also (cough, cough) continues to work for consumers and projection (oh yeah Fed, you've done such a good job so far!) seemingly in order to circumvent the proposed CFPA.

Here is the actual Federal Reserve Monetary Policy Report and the Wall Street Journal gives a fairly good blow by blow on the Q&A. Naked Capitalism notes the Bernanke stonewall as well as commentary on Bernanke's liquidity exit strategy (thumbs up).

Let's do an oldie but Goodie, from May 5th, 2009, where the Federal Reserve Inspector General seemingly has no clue on where trillions of money are going.

There was also a House Financial Services Committee hearing, Systemic Risk: Are Some Institutions Too Big to Fail and If So, What Should We Do About It?

Simon Johnson testified and really spoke out on the entire financial oligarchical stranglehold in addition to how to break up institutions deemed too big to fail. This statement below almost reads like a Thomas Paine quote from the American
Revolution:

In a democratic capitalist society, political power flows towards those with economic power.
And as society becomes more sophisticated, the forms of that power also become more sophisticated. Until we come up with a form of political organization that is less susceptible to economic influences, oligarchs - like booms and busts - are something that we must account for and be prepared for. The crucial first step is recognizing that we have them.

Moody's Economist Zandi also testified and reports an astounding $2.6 trillion dollars in losses from the financial crisis. These are losses, not pledges!

To date, financial institutions have recognized some $1.4 trillion of the $2.6 trillion in expected losses (see Table 3). This suggests the system faces another $1.2 trillion in write-downs. Of these, about half, or $600 billion, will be taken by U.S.-based institutions. The rest will be borne by overseas institutions, mostly in Europe. 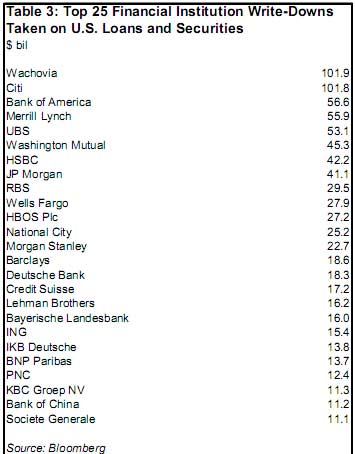 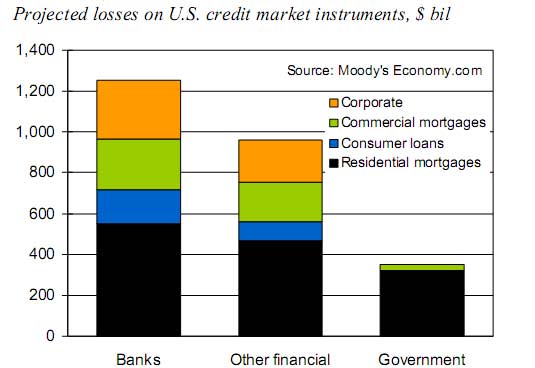 So, you get all sorts of horrifying numbers, damning testimony and then Zandi just tries to blame the entire thing on not rescuing Lehman Brothers, endorses giving more power to the Fed, dismisses the entire history of deregulation, subprime and says Obama's regulatory plan is all good. (shakes head) At least Zandi gives good chart.

Taking a close look at the process for resolving insolvent financial holding companies in order to prevent uncertainty and delay is also a good idea. Nevertheless, the identification of particular firms as too big to fail and, therefore, the beneficiaries of an implicit government guarantee, is a bad idea. I also believe oversight and enforcement powers should remain with the functional regulators and the systemic risk council should serve in an advisory role.

Brookings Institution Alice M. Rivlin also believes setting up the Federal Reserve as this too big to fail (Tier 1) regulatory agency is a bad idea.

What I find so scary about all of this is the message seems to be, oh, crisis all over, nothing to see, nothing to worry about, let's move along now as a theme and by the way, let's enact even worse regulatory ideas that really do not address some of the structural problems and most important of all, let's absolutely deny a few financial oligarchs are walking away with the store. That's the money, the market, the sectors and even more power with the government.

"Move along there is nothing to see here." That is what the financial oligarchy would like us to believe as they continue to reap the benefits of cheap credit provided by taxpayers

You can start hearing the whiffs of talk about the resilience of the markets. Ha. Ha. Fundamentally, nothing has changed but the massive trading profits of the financial conglomerates.

I am working on a post about how all the earning reports are meeting expectation but what is being overlooked is how these companies meeting expectation: cost cutting. Cost cutting, while necessary, is not sustainable over the long haul and unless demand picks up high stock valuations will not be justified.

and a very good thing to look at, this quarterly driven slash and burn of employees that goes on, driven by corporate executive bonuses and temporary stock prices.

and all the "purty" pictures.

Brilliant column, along with the other column from midtowng on Americans saving, etc.

Heard Matt Taibbi at top form the other night in a radio interview along with some incoherent and rambling fellow from Greenwich Associates, Charley Ellis, a 30-year consultant for Goldman Sachs.

Mr. Ellis went on and on about "stubbing one's toe on the furniture," and other incoherent drivel. He repeated that Goldman "was forced to take TARP funds" - no mention of how Goldman Sachs became the fastest bank holding company on record, without the usual waiting period.

Ellis also said "..we are all guilty." Curious, we lost our jobs and have experienced a rapidly shrinking quality of life, while he and his group have walked away with billions. Nope, I'm pretty sure I'm not among the guilty - to the contrary, I'm with that group who has been diligently and actively fighting against the ongoing fraud.

Now Rivlin is also with the Rockefeller Foundation and the Bretton Woods Committee (lobby group for the ultra-rich) and a signatory on that Bretton Woods Committee letter (dated Feb. 11, 2009) which removed the "Buy American" clause from the federal stimulus package. Interestingly, so is Dr. Henry Louis Gates, Jr. who just returned from China.

Now, since this constitutes politicking on behalf of offshoring American jobs, and Dr. Gates has, I am given to believe, received money from China, he is required under federal law to be a registered foreign agent (F.A.R.A.).

Now this is especially interesting as some of the other signatories happen to be members of the Obama Administration, and have, in the past, received money from China or India. This would include Richard C. Holbrooke, Diana Farrell, Laura Tyson (and Henry Kissinger should he still be President Obama's special envoy to Russia).

Therefore, they should all be registered foreign agents.

Of course, I (like many other of my fellow Americans, I suspect) did NOT vote for President Obama to offshore as many American jobs as possible - nor do I wish his appointees to be actively involved in such!

And lest we forget, Secretary of State Hillary Clinton recently gave a speech in India (not her last one, but the second to the most recent one) which gave the strong impression that she was explaining that more Americans would be laid off and that India could expect further offshored jobs to their country from America!

I assume Secretary Clinton, as she received campaign contributions from India, is also a registered foreign agent - or in violation of federal law!

I've had similar questions. How, for example, can a USINPAC, which is Indians with U.S. citizenship, really lobbying for the interests of India and Indian companies, plain be allowed? It's like some of these organizations just use citizenship as a ticket to lobby for foreign interests and I believe Israel and a host of other foreign national have K-street lobbyists for our Congress as well.

We don't know yet if Hillary traded even more U.S. jobs to India yet but I'm wondering.

"Now Rivlin is also with the Rockefeller Foundation and the Bretton Woods Committee.."

My apologies to Ms. Rivlin (I once saw her together with Judith Rodin, and got them confused.) It is Judith Rodin who is with the Rockefeller Foundation and listed as a member of that Bretton Woods Committee.

from Zero Hedge and Naked Capitalism on Rep. Grayson's interrogation of Bernanke.

and frankly, I don't think it was one of Grayson's finer moments. I do not understand, well enough, what the entire exchange swaps is for or if a dollar deflation would even be correlated to comment, so I just left this entirely alone.

I'm just not willing to jump on the Ron Paul bus and think every single thing the Fed does is inherently evil, suspect, esp. when I can't understand international dollar demand, exchange rates and what those swaps really do.

Someone explain it all to me, great, but so far I don't get the big deal.

I mean it's pretty clear the Federal Reserve's actions, at least on the money market run did save the day, so, someone explain to me precisely how that half a trillion set of swaps was a taxpayer ripoff or devalued the dollar cause maybe I'm stupid, but I don't understand it.