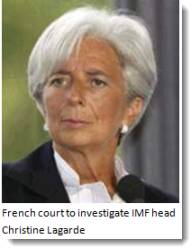 The article noted that there was a controversial case pending in French court regarding Lagarde's actions as finance minister. She made a favorable ruling in a matter regarding a close friend and ally of French President Nicholas Sarkozy. It appeared that her actions resulted in an award viewed as excessive for the Sarkozy ally. The loser in that matter appealed to a French court. At the time, it was known that:

"A three judge panel of the Court of Justice for the Republic will recommend for or against further investigation by mid June. A yes on investigating Lagarde would end her chances for the IMF position.."Economic Populist, May 23

The decision was delayed and the US-European alliance pushed the nomination through. Today, the Guardian had this headline: